An AMD Update: Fab 36 Begins Shipments, Planning for 65nm and AM2 Performance

AMD also gave us a brief update on 45nm, stating that they have successfully produced a SRAM test wafer at 45nm.  It's very popular to produce a wafer full of SRAM chips as you're bringing up and validating any new process, since the circuits are simple enough to actually make the chips producable but complex enough to get useful feedback on your process from the test wafer.

AMD's 45nm SRAM test wafer follows a little over 3 months after Intel demonstrated a similar 45nm test wafer.  The benchmark when producing a wafer of SRAM is how small you're able to produce each SRAM cell. At 45nm Intel was able to achieve a 0.346 square micron SRAM cell size compared to AMD's 0.370 square micron SRAM cells.  Intel's advantage in SRAM cell size is nothing new, as they have been doing so in previous process technologies as well.  The advantage in SRAM cell size is one reason why you often see Intel more eager to equip its CPUs with larger L2 caches; obviously with no on-die memory controller, Intel also often benefits much more from a larger L2 cache than AMD in the first place. 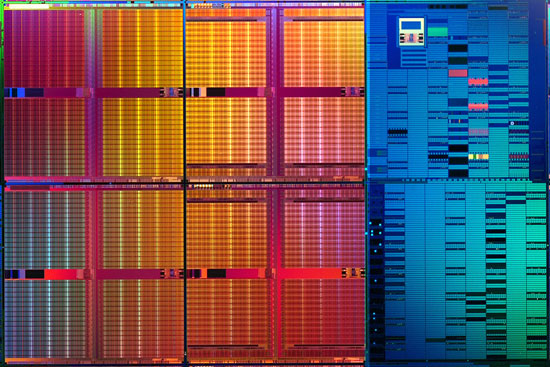 Today's update had nothing to do with Socket-AM2 or AMD's transition to DDR2, but we do have some news with regards to that as well.  As you've undoubtedly heard and maybe even seen elsewhere, AMD's AM2 platform has not been performing very well in development over these past couple of months.  Just before IDF, AM2 samples were still performing lower than their Socket-939 counterparts, which was beginning to worry us and AMD's parters a bit.  However we're excited to report that AM2 performance has finally started exceeding that of Socket-939.  The performance gains we've been hearing and seeing are generally 5% or lower at the same clock speeds using DDR2-800, but it's still very early.  The main point to take home is while the final verdict is still not out, AM2 is at least starting to look like more of an upgrade and not what we saw with Intel's DDR to DDR2 transition almost 2 years ago.

There's still a lot that AMD does have to give us however, including a more specific roadmap of what comes after their DDR2 transition.  AMD's Phil Hester has publicly stated that once AM2 launches it will be more forthcoming with information on future architecture revisions, we can only hope so because over the past 12 months Intel has put the pressure on AMD to really start talking about the future.

The good news today is that AMD is truly growing as a company.  By 2008 AMD hopes to be able to double its yearly shipments of microprocessors, and it's finally got manufacturing capacity to do just that.  For the past few years AMD has held technological and performance advantages over Intel, now it's time for AMD to play catchup on the manufacturing side.  AMD has a long way to go before being anywhere close to Intel's manufacturing abilities, but it is in a very good place today.