Superb Performance/Watt is what Sun promises with its Coolthreads T2000 server. However, the current T2000 still consumes a bit more power than what they necessarily need. For example, for logistical efficiency reasons, Sun uses a 550 Watt power supply that is also used in the Sun's Galaxy Opteron servers. That power supply will be replaced by a 400-450W more power efficient one later on. 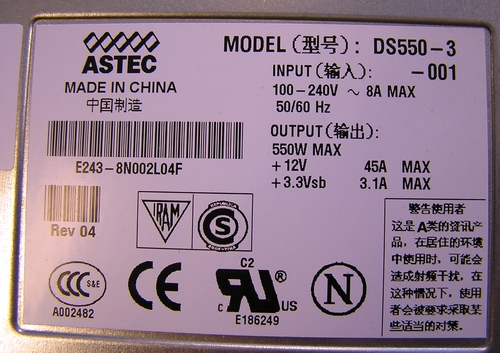 Also, it seems that the current T1 cannot disable entire cores or threads automatically, while future T1 CPUs will be able to do that. The On-chip thermal sensors and the throttling mechanism are built-in.

This is the power supply that we used on the Xeon. 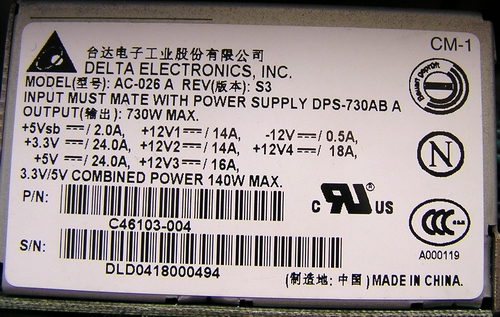 Take the results with a grain of salt, as it is impossible to make everything equal and perform a scientifically accurate power test. We tested all machines with only one power supply powered on, and we also tried to have a similar number and type of fans (excluding the CPU fan, the T1 didn't have one). But there are still differences between the different motherboards, and the Sun used 2.5 inch disks.


The big loser here is, as expected, the Intel Xeon server. The T1 outperformed the dual Xeon 3.6 GHz with a decent, even significant margin and consumes about half the power of the Xeon machine. Add to this that a more efficient 450 Watt power supply will lower the power by another 30 to 40 Watt for the T2000.

The other winner is, of course, the Opteron HE. This CPU could also be used with a more efficient and lower peak power power supply. An Opteron HE is the best x86 alternative for the Sun UltraSparc T1, but fortunately for Sun, this CPU has not yet been picked up by a big OEM like HP or IBM.

Even if we assume that the exceptional Spec Web 2005 and JBB 2005 numbers, which Sun posted are too optimistic, our own power measurements confirm that the T2000 is much more than yet another Sun Server.

At first sight, Sun has won the performance/watt battle for now, but it cannot rest on its laurels. Low voltage versions of the Xeon "Woodcrest" (Core architecture) and Opteron might be able to come very close to the performance/Watt levels that the T1 offers. Our first impression is also that Sun still has a lot of room for improvement - better power supplies and power management - and it can continue to outperform the x86 servers by a decent to large margin when it comes to performance per Watt.

We also can't shake the feeling that the number of applications, which will really exhibit the kind of exceptional performance that Sun's own heavily optimised benchmarks show, will be quite limited. A slightly annoying issue is indeed the fact that relatively low amounts of FP instructions in your applications may lower the performance of your T2000 significantly. We are not talking about heavy HPC FP crunching applications, but server apps with a bit of FP calculations here and there. Contrary to other servers, 1.5-2% of FP instructions might be enough to make your application less suitable for the T2000. And profiling your applications in depth is not something that all administrators can or like to do. Sun seems to agree quietly, and is very busy with the T2 (Niagara 2), which has one FPU per core. 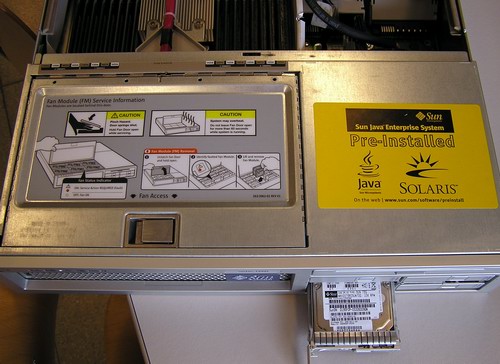 Last, but certainly not least, Sun's solid engineering has impressed us. Sun's meticulous attention to detail resulted in a sturdy, well-polished machine. It gives the impression that it is made to run in a desert as an impressive battery of noisy fans cool down a CPU and a motherboard, which hardly need much cooling. If the air-conditioning of the datacenter fails, the last server that I would worry about are the T2000 servers. The Xeons, however...

The price, about $13000 for the tested server (with 8 GB), seems a bit higher than a typical x86 server, even when equipped with redundant power supplies, fans, etc. But as we said, we'll save our final judgment for our next article, when we have access to much more benchmarking data. So far, the Sun T2000 has been one of the best-made servers that we have seen, and while the performance claims of Sun have not (yet?) materialised in our labs, it is definitely the most attractive Sun Server that we, as "x86 server buyers", have seen in years.