EPoX continues its focus on Asian demand for motherboards, although once in a while, we see their better products in the US and Europe as well. One of the new products that we will definitely see in the US is their new Socket 754 SLI motherboard. In our opinion, SLI for the low end has always made sense; buy a quick and dirty Sempron and a 6600 or a 6500, and then buy another 6xxx card in a year or so. With NVIDIA's recent drivers, it is not even necessary to use a bridge SLI adaptor. Sub $100 SLI motherboards are already showing up for Socket 939, and EPoX's new Socket 754 SLI motherboard would give some of those 939 boards a run for the money.

EPoX had a dual PEG 945P board on display for us, specifically geared at the overclocker. Once Intel gets a decent dual core processor out the door (January, we hope), cheap boards like this EP-5P945-J could shake up other enthusiast manufacturers who are ignoring the Intel market. 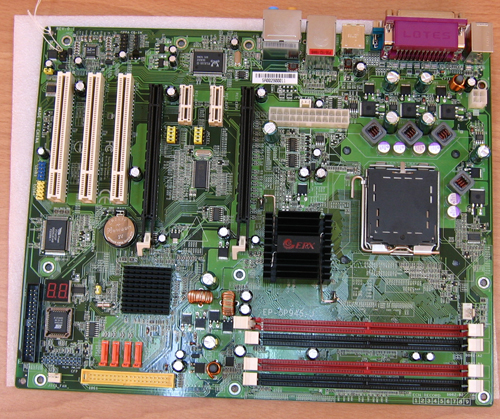 However, the real mystery board of our whole trip had to be the EPoX 9U1697-J. Not surprisingly, this board is based on ULi's M1697 chipset, and is very similar to DFI's original nForce4 paddle-less motherboards. The two rows of yellow jumpers can actually be repositioned to provide dual x8 PEG graphics or a single x16 PEG. Unfortunately, the only NVIDIA SLI drivers that actually recognize this configuration are ancient drivers from last year! Although, in theory, it is a good idea, the likelihood of NVIDIA releasing a driver for ULi seems almost non-existent.

DFI's RD480 Crossfire motherboard continues to ring up headlines as the only widely available Crossfire motherboard, and they're also the only company to adopt the ATI SB450 Southbridge. (The fact that DFI was first to market and the only manufacturer to adopt SB450 are not coincidences.) Performance is good according to our recent benchmarks, but with a $200 price tag, the DFI LanParty UT RDX200 is almost double the price of the original ATI Crossfire motherboard roadmap predictions. MSI and Gigabyte also have Crossfire boards slated for immediate release, so perhaps we will see more price adjustments here.

Aside from the stuff that we reported on in Taiwan, there was a lot of under-the-table information that we didn't really want to associate with any one vendor. Here are just a few tidbits, in no particular order.

Although GeForce 6800GS seemed like a sure thing for the near future, with the Q3/Q4 NVIDIA chip allocations, there might not be enough surplus chips to really justify re-releasing another 6800 part. We've seen the definition in the NVIDIA driver set, but manufacturers don't seem eager enough to really embrace the new card anyway. The only chips not in allocation, GeForce 6200 and family, constitute the only market that ATI is really outselling NVIDIA on anyway. Update: NVIDIA has confirmed with us that 6800GS supplies are anything but weak, since they built all the cards for their partners anyway. Unfortunately we are under NDA so that is about all we can say for now.

There was lots of talk about R580 and RD580 between all the manufacturers. R580, ATI's successor to R520 (X1800), seems far too distant in the future to really talk about, unfortunately. One vendor in particular had already stated plans to build a practical dual-R580 board, but without specs, we could not confirm this. ASUS is apparently the only vendor with a dual X1800 graphics card, but like their individually numbered dual-G70 cards, don't expect this to be an item that you'll be able to buy at Fry's anytime soon. RD580, on the other hand, was widely cited all over Taiwan. In fact, RD580 will already start sampling this month - officially giving RD480 one of the shortest life cycles in computer product history. However, RD580 does boast some awesome features including 36 native lanes. Two of those will still be used for the interconnect to the south bridge (maybe even an ATI Southbridge!), leaving two lanes for PCIe 1x slots. The other 32 lanes could be configured however the manufacturer desires, but almost all will jump on the opportunity to have dual x16 lanes for Crossfire. NVIDIA new MCP, MCP55, will have only 28 PCIe lanes.

VIA fell so far off the face of the map since our last trip to Taiwan that manufacturers seemed hesitant even to mention their name. K8T900, VIA's dual PEG chipset, totes support for dual S3 "SLI"-like graphics. Unfortunately, without support from NVIDIA or ATI, dual S3 graphics probably aren't going to get VIA any big contracts in the near future. Of course, dual core support wouldn't hurt their cause either.

Another interesting tidbit from Taiwan was the sheer volume of DDR2-based graphics cards. Virtually every manufacturer has replaced their DDR1 based video cards with DDR2 solutions instead. As we mentioned earlier, DDR2 was actually cheap enough on the spot market to purchase over DDR1, so many vendors bought in bulk. The DDR2 surplus won't last forever, but the supply will last vendors well into 2006.