Intel's 65nm desktop processors in the first half of next year fall into two categories: Cedar Mill and Presler. Cedar Mill is nothing more than the current Pentium 4 600 series, shrunk down due to the use of the 65nm process. That means that Cedar Mill based Pentium 4s will have the same 2MB L2 cache and architectural configuration of the current Pentium 4 600 CPUs, and that they should perform no differently. The only tangible differences between Cedar Mill and today's 90nm Prescott will be a lower operating voltage and lower power consumption.

Intel's Presler CPU is the successor to their dual-core Smithfield processor, and does have one major architectural improvement: each core features a 2MB L2 cache, instead of the 1MB L2 cache per core on Smithfield. So, although we won't be investigating it here today, there is a performance benefit that Presler holds over Intel's current dual-core processors.

From a manufacturing standpoint, Presler is physically two separate dice on a shared package, while Smithfield was a single die that housed both cores. The difference between the two is that it is easier to achieve higher yields on two smaller dice than one large die, which is why Intel went to this arrangement with Presler. 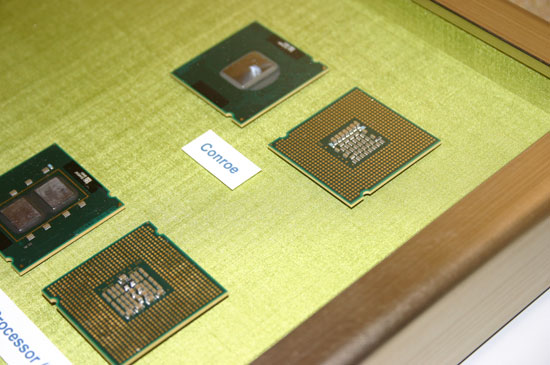 The chip at the bottom of the image is Presler; note the two individual processor dice.

Just like Prescott, Intel's dual core processors have a number of different operating voltages, depending on the luck of the draw. In this case, we compared Presler to a Pentium D that featured a 1.3625V core voltage. Our Presler sample, however, featured a 1.300V core voltage - identical to that of a single core Cedar Mill.