Samsung, Hitachi, Seagate, Toshiba, Fujitsu. Five names in the computing industry we have come to know as leaders in storage devices through their various technologies have come to a single conclusion: Hard disk storage technology needs an innovation. That innovation, for now, might be perpendicular recording; a method of storing information many have been talking about for a few years now. Only recently has anyone implemented this into a physical, real product but we'll get into specific names and products later. For now, let's take a look at what perpendicular recording really is and how it works.

Current hard disk drive technology allows us to store as much as 133GB on a single platter. Seagate's 7200.8 series Barracuda drive utilizes three of these platters to produce a 400GB drive which is the first and only drive to make use of the highest density platters to date...when it comes to the linear recording method of course. The limit to how much data we can fit on a single platter is quickly approaching. We can only cram so many bits on to this magnetic media until superparamagnetism begins to kick in.

When the areal density -- the number of bits that can be stored on a square inch of disk media -- of a disk medium reaches 150 gigabits per square inch, the magnetic energy holding the bits in place on the medium becomes equal to the ambient thermal energy within the disk drive itself. When this happens, the bits are no longer held in a reliable state and can "flip," scrambling the data that was previously recorded.

The scrambling happens because of the proximity of each bit and this keeps us from manufacturing reliable hard disk drives with areal densities greater than 150Gbpsi (Gb per square inch).

Because of superparamagnetism, hard drive technologies are expected to stop growing once they reach a density of 150 gigabits per square inch.

Traditionally with linear recording method each bit is written side by side on a flat surface of the platter. To create higher density platters, manufacturers have to shrink these bits down to smaller sizes to be able to double hard drive sizes every 18 months or so. It is obvious that the bits can become crammed resulting in the superparamagnetism phenomenon. What perpendicular recording does is it records, or magnetizes, bits vertically through the platter instead of horizontally which efficiently conserves surface area which, in turn, results in the effective doubling of the areal density of the platter.

The phenomenon of supermagnetism can still occur with this technology but it is not yet known what the limits are of devices using perpendicular recording. We'll just have to wait and see what the R&D divisions of our beloved storage manufacturers can come up with, but until then, perpendicular recording has a bright future...right now. 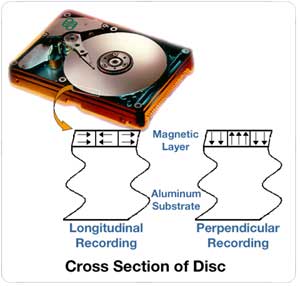 Taking a look back to past advances in storage technology, many of us can remember back when IBM first introduced "Pixie Dust" technology which promised to increase platter densities by at least a multiple of 4. "Pixie Dust" is just a special project name given to the antiferromagnetically-coupled media (AFC) technology because of the highly effective nature of the layer of ruthenium used.

Ruthenium is a hard, white metal. It does not tarnish at room temperatures, but oxidises in air at about 800°C. The metal is not attacked by hot or cold acids or aqua regia, but when potassium chlorate is added to the solution, it oxidises explosively.

The two magnetic layers act against each other on either sides of the ruthenium layer, not pushing each other away, but rather having opposite force along the layer of ruthenium. As the head of the disk moves from bit to bit it detects the change in direction of the magnetic pull of each of the layers. So with two magnetic layers on either side of the thin layer of ruthenium, the bit fields can be made smaller and still maintain their strength and resistance to superparamagnetism.

This "Pixie Dust" technology will definitely help Hitachi keep away from using the perpendicular recording technology for a while but when superparamagnetism starts kicking in, they will have to succumb to newer, more improved means of recording on magnetic media.

Samsung, Fujitsu, and Toshiba also have perpendicular recording in their plans and we should expect to see product introductions from them in the near future. We will definitely keep you updated on any new introductions and releases of products that make use of these new high density technologies.