As the Noctua NH-P1 does not have a fan at all, for fairness’ sake, we are comparing its performance with other coolers running at their low-noise mode (half fan speed). Still, due to the nature of the NH-P1 or, more precisely, its colossal mass, we tripled our regular testing time, allowing the temperature to stabilize.

Meanwhile, we are not publishing any noise-related tests for the obvious reasons: the NH-P1 does not generate the least bit of noise under any circumstances (at least, not while an optional fan is not attached to it). So all we could measure is the ambient noise, which is a function of our test environment rather than the cooler itself. (Though we were tempted to throw it into an anechoic chamber just to produce some truly crazy figures)

Finally, we should note that we are testing the NH-P1 in its purely passive form, without any forced airflow at or even near it. 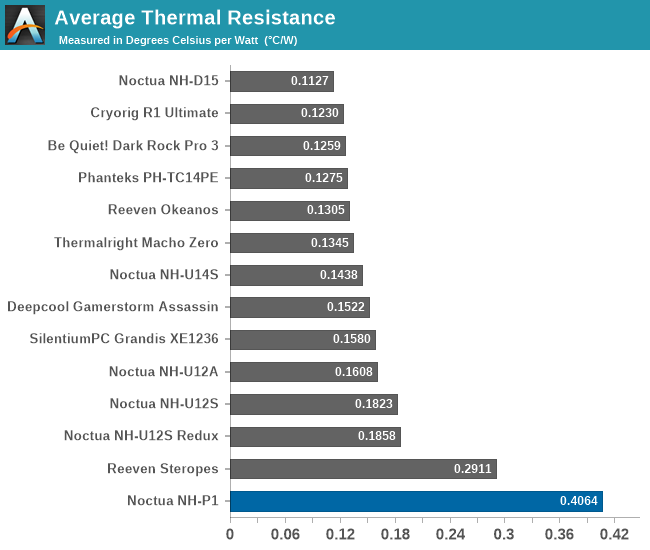 As expected, the Noctua NH-P1 cannot compete directly against most typical CPU coolers that make use of forced convection. To that end, the NH-P1 displayed an average thermal resistance of 0.4064 °C/W, which is very high if compared against a top-tier CPU cooler, but does land in the same league as basic stock CPU cooler designs. 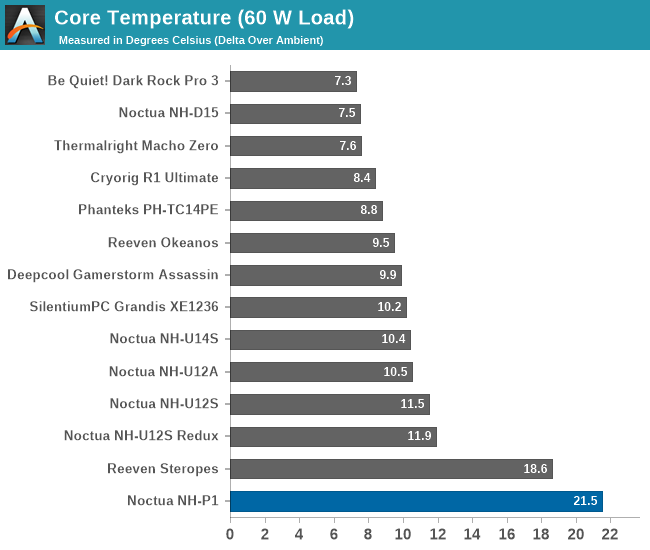 The Noctua NH-P1 can handle loads lower than 100 Watts rather well. The temperatures will be high, but modern processors should happily operate at temperatures up to 50°C above ambient – assuming that the internal temperature of the PC case is relatively close to that of a typical household room (~22°C). Prolonged loads greater than 120-140 Watts will have the temperature delta widening too far for the NH-P1 to keep a chip from thermally throttling. The good news is that modern CPUs are designed to handle just such a thing (see: virtually any compact laptop in the last decade), but our testing equipment is another story: we had to stop our testing after 200W in order to avoid damaging our equipment.

We should point out again that these results require excessively prolonged testing time than normal, as the thermal inertia of the NH-P1 is outworldish. For typical PCs, where the CPU is not constantly running at full load, the thermal performance of the NH-P1 is bound to seem much better. Still, we would not recommend using it on infamously hot processors and/or on an overclocked processor. Think something closer to AMD & Intel's standard 65W parts, rather than their extreme K/X parts.

Noctua is one of the most reputable PC cooling manufacturers for a reason: their products typically are well-designed and of excellent quality. The NH-P1 is no exception to that rule, and the timing of its release definitely is not coincidental. For example, with AIO coolers becoming increasingly popular over the past few years, typical PC cases nowadays are a bit wider and roomier, which allowed for the NH-P1 to greatly lengthen its compatibility table, as it would not fit the width of many older case designs.

Using a passive CPU cooler does have disadvantages, the most important being the (relatively) low thermal performance. The Noctua NH-P1 overcomes that issue, with the cooler offering passable thermal performance for most modern desktop PC processors. Its steady-state thermal resistance is comparable to that of a basic stock CPU cooler but its thermal inertia is colossal, meaning that it can maintain good operating temperatures under typical operational circumstances, as the processor will only be facing near-maximum loads for short periods of time.  This massive thermal inertia comes from the respectively huge mass of the NH-P1, which limits the compatibility of the cooler and greatly increases its manufacturing cost. 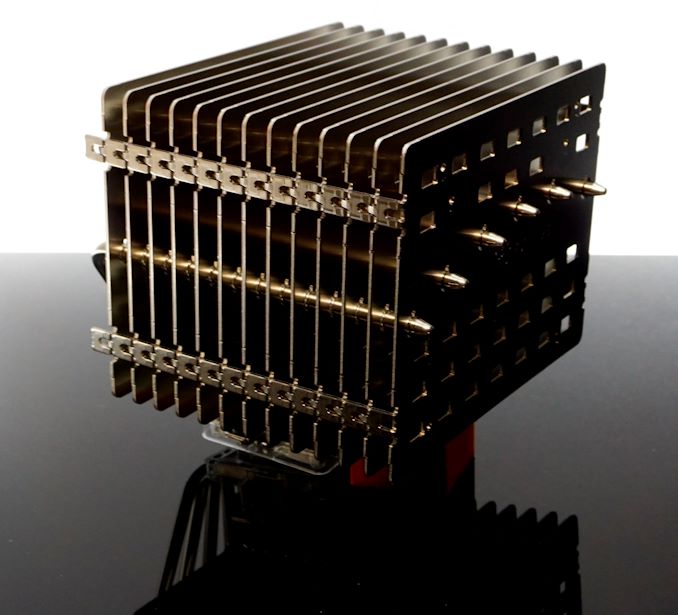 With that said, the use of a passive CPU cooler also has other implications that need to be considered. The two major implications are significantly higher internal system temperatures and lack of airflow for improved VRM/motherboard cooling. Even in a well-designed passive system, the temperature of the motherboard’s critical components is almost certainly going to be significantly higher than a typical PC. Significant forced ventilation could remedy that, but the use of multiple case fans would defeat the purpose of a passive CPU cooler to begin with. Therefore, even if the CPU cooler itself could handle greater thermal loads, it would be problematic for the rest of the system to have such a huge dissipation of thermal energy inside it without any significant means of removing it.

It is also possible to add an optional 120 mm fan on the Noctua NH-P1. Most would think that using a fan defeats the purpose of having a passive CPU cooler in the first place but, on the other hand, most modern motherboards allow for the programming of meticulous cooling profiles. It would be very realistic to have a top-tier CPU and have the cooling fan operate only when, say, the temperature rises above 80 °C, even if as just a backup.

In terms of quality, Noctua never disappoints. If anything, their products usually are the benchmark for how top-tier designers and manufacturers should practice their business. The NH-P1 is very well-designed mechanically, excellently assembled, and is built from premium materials, all as we'd expect from a high-end Noctua product. But designing and building such a premium product is costly, and that is reflected by the $110 price tag of the NH-P1. The sheer mass of the NH-P1 ends up being a major factor here, as the costs of the nearly half a kilo of additional machined copper and aluminum needed to build such a large heatsink add up quickly.

Ultimately, it is clear that Noctua does not have the mainstream market in mind, but rather is going after advanced users who understand and accept the implications of using a passive cooler. In that respect the NH-P1 is very much a niche product, but it's also a product that fills that niche well. Building quiet PC systems has always been a popular design choice, and to that end Noctua's NH-P1 should find itself right at home in the silent PC community.