The Test, Card, and High Resolution

Before we get down to the performance tests, let's look at our test system.


The card this time around is a single slot solution. With the process shrink to 110nm an insignificant increase in clock speed, NVIDIA has produced a chip that runs at lower power and temperature than NV40. At the same time, the increase in parallelism has served to boost performance.

Layout of the card is relatively similar to the 6800 Ultra, but there are a few differences. We've still got 2 DVI slots (both single link), but the solder point for the silicon image TMDS chip for dual-link DVI is either missing or moved. We will certainly be interested in seeing a workstation version of this part.

So what is all the fuss about? Here's a look at the NVIDIA GeForce 7800 GTX card: 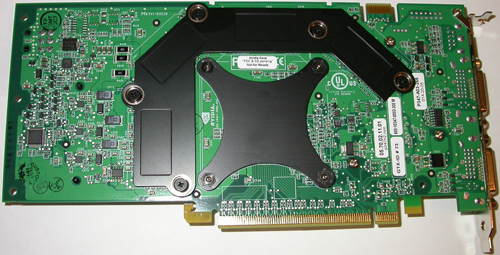 It is important to remember that we tested at resolutions of 1600x1200 and higher because lower resolutions are CPU limited without AA and AF enabled. In many cases the GeForce 7800 GTX don't show much difference in performance with and without antialiasing at lower resolutions. This kind of data doesn't give us much useful information about the card. We have truly reached another plateau in graphics performance with this part: pushing the card to the max is all but necessary in order to understand its performance characteristics.