MediaTek’s re-entry in the flagship SoC space with the Dimensity 9000 comes at quite the opportunistic time in the landscape. The company has had a very successful 2021 with large market share gains, and we’ve even seen this translate into more exposure in more visible design wins in the market, such as the OnePlus Nord 2 series or the Xiaomi 11T. 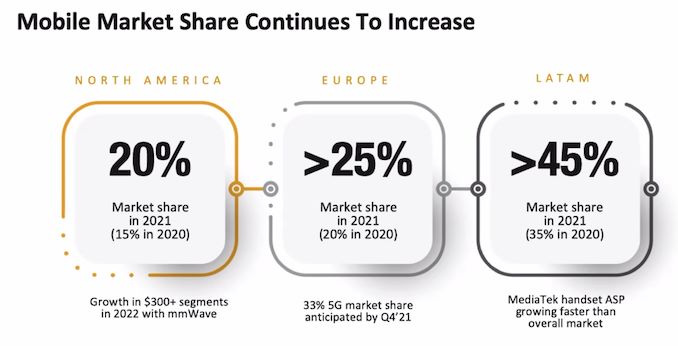 Having seen large market share gains and being able to fill in a huge gap in the market where Huawei and HiSilicon were in the past, the Dimensity 9000 seems to have come at the perfect time, as more vendors want to be able to differentiate their highest end devices and diversify their reliance on Qualcomm’s Snapdragon series.

The Dimensity 9000, on paper, and by the specification, looks like an extremely strong SoC for 2022 flagships. On the CPU side of things, MediaTek has fully equipped the SoC with near the maximum possible configuration – high frequencies, large caches, and surprisingly enough for us today, a full performance configuration of the new Cortex-A510 cores. The 8MB L3 is helped by a new 6MB system cache that further improves memory performance, which the Dimensity 9000 of is currently the first and only chip to support new LPDDR5X.

The GPU side, the chip likely will be the only design for 2022 with a large Mali GPU. Advertised performance figures are good, but what matters most is power efficiency and sustained performance. While the metrics here are still a bit vague, the N4 process node of the chip, again, the first of its kind, is likely to position the chip in an excellently against 2021 devices, and if Qualcomm and Samsung don’t have major leaps in their upcoming designs, also position the Dimensity 9000 extremely well against the 2022 competition. 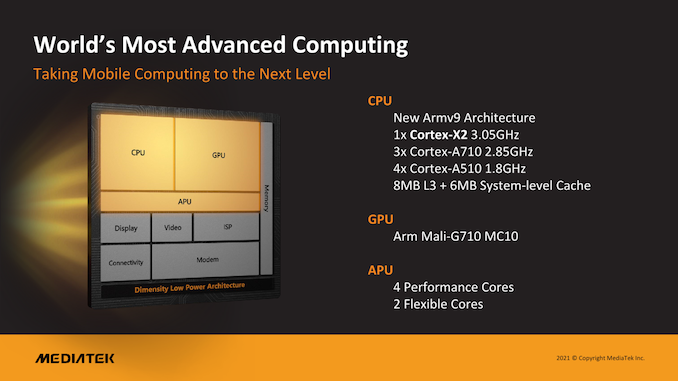 MediaTek’s camera and ISP leaps are also just huge. We haven’t really had many camera-centric phones powered by MediaTek silicon over the last few years, so if vendors are able to take advantage of the chip’s new camera architecture remains to be seen, but at least the high-level specifications are definitely worthy of 2022 flagships.

The chip’s lack of mmWave is likely limit its success to non-US markets and devices, but that’s a situation we generally become used to over the years.

The Dimensity 9000 is MediaTek’s strongest showing in years, and has the specifications and heft to properly shake up the high-end market. I see it competing against, or even besting whatever Qualcomm has in queue for next year, which is a pretty shocking turn of events. What matters now, is for MediaTek to actually have the high-profile flagship device design wins, to be able to fully rationalise their investment in such a SoC. Luckily, we’ve been told the chip has already sampled to customers, and we’re to expect commercial device launches in the first quarter of 2022. Exciting times are ahead in the mobile SoC space.