The G5 as Server CPU

While it is the Xserve and not the PowerMac that is Apple's server platform, we could not resist the temptation to test the G5 based machine as a server too. Installed on the machine was the server version of Mac OS X Tiger. So in fact, we are giving the Apple platform a small advantage: the 2.5 GHz CPUs are a bit faster than the 2.3 GHz of the Xserve, and the RAM doesn't use ECC as in the Xserve.

A few months before, we had a quick test run with the beautifully designed and incredible silent 1U Xserve and results were similar, albeit lower, than the ones that we measured on the PowerMac. 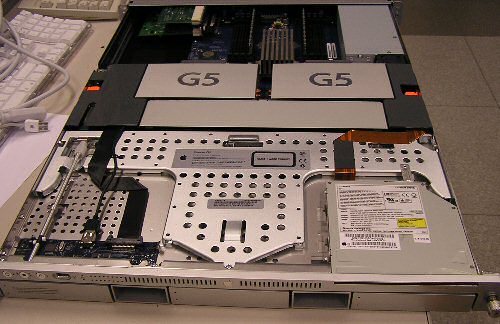 Network performance wasn't an issue. We used a direct Gigabit Ethernet link between client and server. On average, the server received 4 Mbit/s and sent 19 Mbit/s of data, with a peak of 140 Mbit/s, way below the limits of Gigabit. The disk system wasn't very challenged either: up to 600 KB of reads and at most 23 KB/s writes. You can read more about our MySQL test methods here. 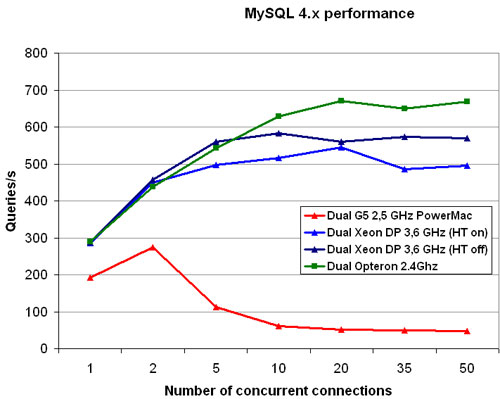 Ever heard about the famous English Plum pudding? That is the best way to describe the MySQL performance on the G5/ Mac OS X server combination. Performance is decent with one or two virtual client connecting. Once we go to 5 and 10 concurrent connections, the Apple plum pudding collapses.


Performance is at that point only 1/10th of the Opteron and Xeon. We have tested this on Panther (10.3) and on Tiger (10.4.1), triple-checked every possible error and the result remains the same: something is terribly wrong with the MySQL server performance.

SPEC CPU 2000 Int numbers compiled with GCC show that the G5 reaches about 75% of the integer performance of an equally clocked Opteron. So, the purely integer performance is not the issue. The Opteron should be quite faster, but not 10 times faster.

We did a check with Apache 1.3 and the standard "ab" (Apachebench) benchmark:


The new OS, Tiger doesn't help: the 2.7 GHz (10.4.1) is as fast as the 2.5 GHz on Panther (10.3). More importantly, Apache shows exactly the same picture as MySQL: performance is 10 times more worse than on the Xeon (and Opteron) on Linux. Apple is very proud about the Mac OS X Unix roots, but it seems that the typical Unix/Linux software isn't too fond of Apple. Let us find out what happened!