Although generally less of a hinderance for gaming systems, which are most often used on a desk and connected to power, AMD has stated that the Radeon RX 6800M is able to go into a “Near 0 Watt Idle” state, meaning despite having a massive 150-Watt TDP GPU inside, battery life should not be compromised as severely as it is on other gaming systems.

ASUS outfits the G513QY with a 90 Wh battery, which is near the limit of what is allowed in a laptop, so that, coupled with the 7 nm CPU, and a power-gated GPU, should provide good results. 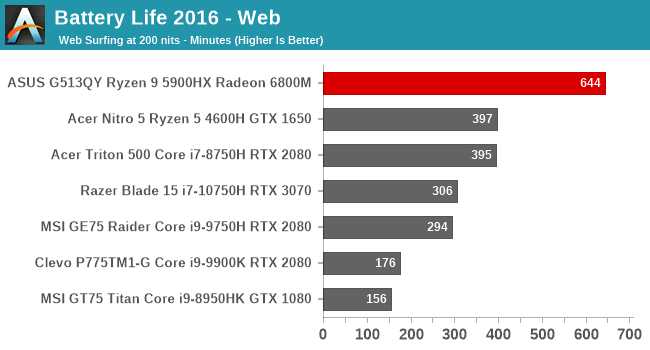 As much as the performance has been amazing on the AMD CPU and GPU combination, perhaps the battery life result is even more impressive. Typically, gaming systems are not very efficient, as even the systems that do allow the GPU to be disabled during light tasks still have a high base power draw, but AMD has really done amazing work to power gate the GPU when it is not needed. When coupled with the very large battery, the ASUS Strix G513QY dominates the battery life charts compared to other gaming-focused systems. 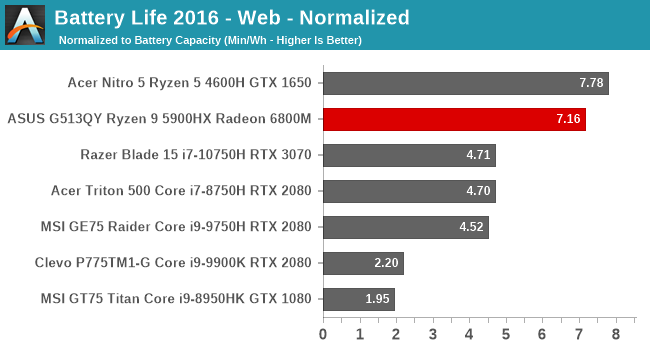 Looking at the platform efficiency with the battery size removed, the ASUS G513QY proves that the amazing battery life is not just down to the 90 Wh battery either. AMD has really done a fantastic job with system power with the Ryzen 9 5900HX and Radeon RX 6800M combination.

One of the newer tests to our laptop suite is the PCMark 10 Modern Office battery test, which leverages the same workloads in the PCMark 10 benchmarking suite, and then runs them in 10-minute loops. If the system gets the work done quicker, it is able to idle for a larger portion of the 10-minute window, so that more performant systems are not disadvantaged. Once again, the battery life is really astounding for a system of this type. 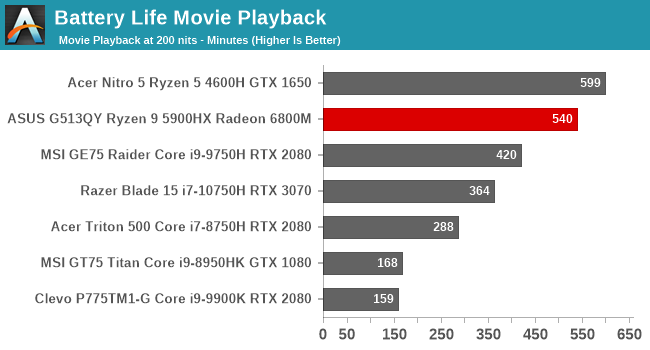 On thin and light laptops, movie playback is generally the most efficient task, since the media decode is offloaded to the media block. On the ASUS, the battery life was actually slightly less than the other tests, but still well ahead of most other gaming systems. 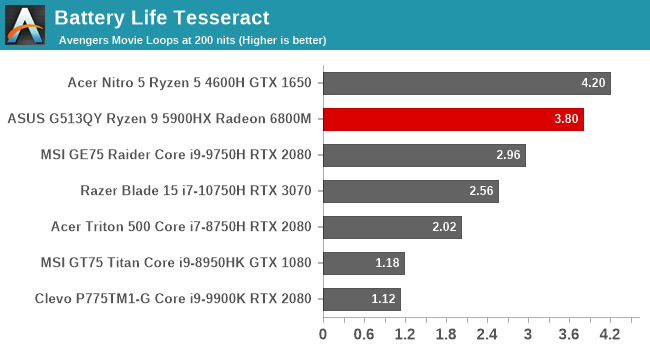 The Tesseract score divides the movie playback runtime by the length of The Avengers movie, and the ASUS G513QY can almost get through four complete viewings before needing to be recharged.

Thanks to a 280-Watt AC adapter, there is plenty of power available to charge the battery quickly, even if the device is in use. Interestingly, the ASUS G513QY also includes a USB-C port on the rear which supports up to 100 Watts of power delivery, and that can go both directions. You can charge something from the port if needed, but the power delivery also allows the laptop to be recharged from external battery packs if needed, or from a USB Type-C charging cord. It will not be able to delivery the full power for when the system is under load, but still makes for a nice backup power source if needed. 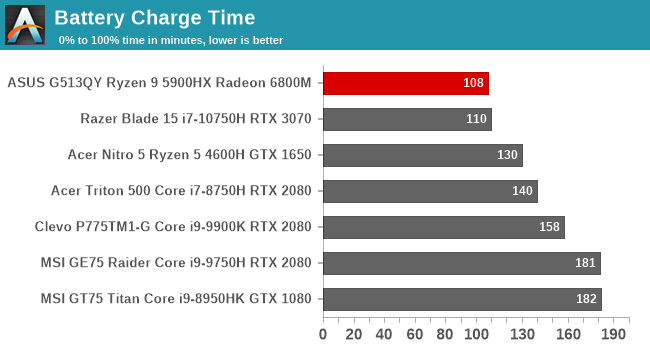 The charge rate is very quick on this system. Despite the large 90 Wh battery size, the system recharged the quickest of the sampled systems. ASUS claims 0-50% in less than 30 minutes and we measured 31 minutes to 50%.