Conclusion: The War of Attrition

(These numbers have been updated with the later 0x34 microcode)

Intel’s desktop product teams have had their hands in a bind for a while. The goal was always to migrate from 14nm to 10nm when the intersection of performance, cost, and power hit the sweet spot. This was originally expected to happen after 2017, with the launch after Kaby Lake, but we are here in 2021 and this still hasn’t happened. Intel’s 10nm manufacturing process is unable to scale to the right level of frequency, power, and cost that is needed for an effective desktop processor.

Now Intel is full of smart people – alongside the manufacturing team, the internal microarchitecture teams building the next generation cores would have already been 3-5 years ahead in their design cycle, waiting to deploy the best ideas when the manufacturing was ready. However, with a plug in the pipeline and no way to easily patch it, Intel had to decide what to do in a worst case scenario – what if 10nm is never ready? 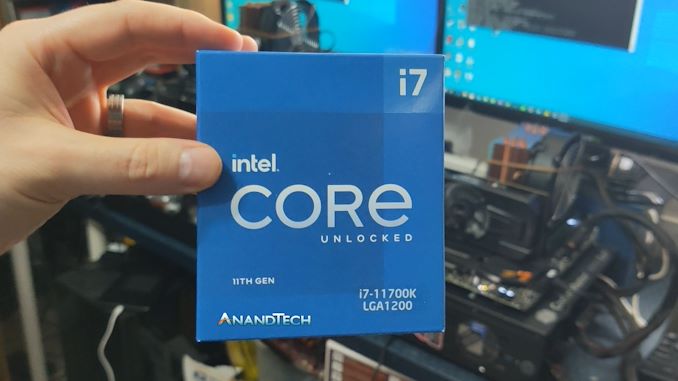 The first part of that answer is in our hands today. Despite not being designed for 14nm, Intel took its 10nm Sunny Cove core design (and Xe integrated graphics), and rebuilt it from the ground up. This sounds arduous – all the solutions to get things working in 10nm need to be rethought, and new issues with timing and signal integrity have to be solved. It wasn’t designed for 14nm, and to signify its difference, it was called Cypress Cove. These engineers are no doubt frustrated that they had core designs on the table, ready to go on 10nm, but they had to re-draw them in a different style where they are bigger and more power hungry, just to get something out of the door. That different style is Rocket Lake, and specifically the Core i7-11700K we have tested today.

Improvements for Desktop, Sort Of

Rocket Lake brings to the table a big core design with new features such as AVX-512 and PCIe 4.0. The core is so big that in order to keep die size, yield, and costs similar to the previous generation, the final design only has eight cores rather than ten. This would appear to be a 20% regression in absolute performance, however Intel is promoting a +19% average performance gain, evening it all out, while also providing the new features listed above. That +19% also should apply to single thread situations, enabling faster single user response time.

To validate Intel’s claims here, we run our industry standard benchmarks, such as SPEC, and compare the i7-10700K to the i7-11700K. Though this testing, we can confirm that Intel is correct on that +19% claim, however that isn’t an overall performance uplift and there’s a big asterisk next to that number.

All workloads at their core, even when browsing the web or word processing, can be split into integer (whole numbers, most workloads) and floating point (numbers with decimal places, workloads with math). In our testing, we saw the following:

Oh. While Intel’s claim of +19% is technically correct, it only seems to apply to math-heavy workloads or single thread integer workloads. The benefits of non math-based throughput are still better than average, but only at 5.8% for multithreaded. Very rarely do Intel’s big claims come with an easily identifiable asterisk.

When we look at our real-world data, in almost every benchmark the 11700K either matches or beats the 10700K, and showcases the IPC gain in tests like Dolphin, Blender, POV-Ray, Agisoft, Handbrake, web tests, and obviously SPECfp. It scores a big win in our 3DPM AVX test, because it has AVX-512 and none of the other CPUs do.

Users looking at our gaming results will undoubtedly be disappointed. The improvements Intel has made to its processor seem to do very little in our gaming tests, and in a lot of cases, we see performance regressions rather than improvements. If Intel is promoting +19% IPC, then why is gaming not seeing similar jumps?

Normally with gaming we might look to the structural latency comparison to see where some uplifts might come. 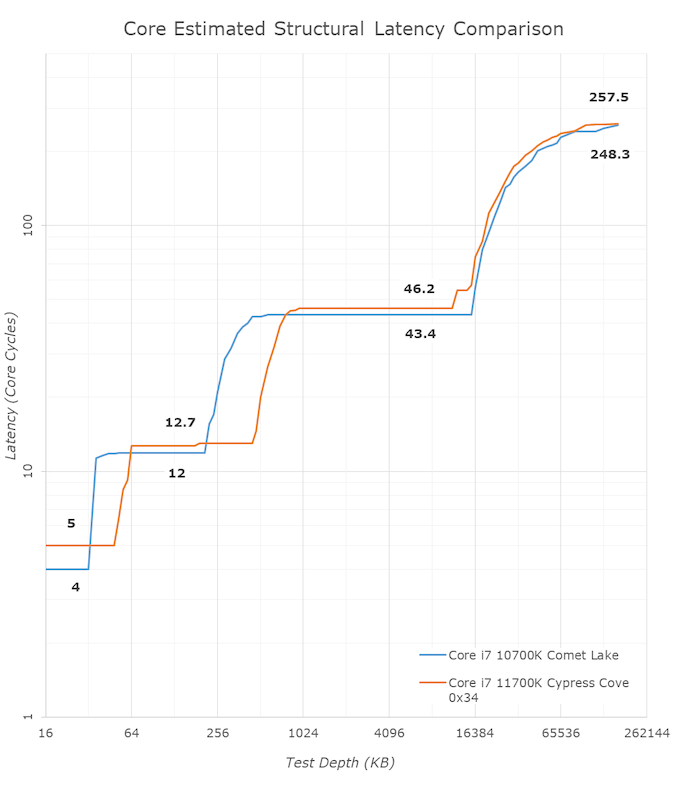 The biggest change in the cache hierarchy is in the L3 cache, which is now ~45-46 cycles rather than 42-43 cycles. When we originally tested this with the 0x2C microcode it was 51 cycles, but Intel has implemented updates to reduce this to around 45-46 cycles, which improves gaming performance a little. This is still a slight regression, and we’re seeing the core-to-core latency (regardless of microcode) still show 28-30 nanosecond latencies on most cores, rather than 18-24 as observed on Comet Lake. We expected some regressions from Ice Lake/Sunny Cove with the backported core – 51 cycles for the L3 was considered a lot, but reducing that to 45-46 cycles is still a slight regression, but more in line with what we expected. Overall, there is an effective latency decrease from having larger caches, but this hasn't translated into gaming performance along with the increase in IPC.

But Margins, Power, and Temperature

Moving into this review, users that have followed Intel’s desktop platform know that sustained power modes on the high-core count models are a lot higher than the number on the box suggests. This isn’t just limited to the overclockable processors, like in our i9-10850K review where we saw 260 W, but even the i7-10700 rated at 65 W would push 200 W, especially in motherboards that ignored recommended turbo limits (which is practically every consumer gaming motherboard).

The migration of Sunny Cove cores, already known for being power hungry, onto an older process node, and then bundling AVX-512 in the mix, has had a number of enthusiasts concerned for how Intel would approach power consumption. Based on our testing today, the simple answer is to offer a blessing to the deity of your choice for a good CPU. Our Core i7-11700K is rated at 125 W. But in practice for a mild AVX2 workload we saw 225 W of power consumption and a temperature of 81ºC, while a general workload was around 130-155 W at 60ºC.

The danger is that during our testing, the power peaked at an eye-catching 292 W on one of our tests systems. This was during an all-core AVX-512 workload, automatically set at 4.6 GHz, and the CPU hit 104ºC momentarily. A second motherboard, running new firmware, only peaked at 276 W, running at 4.4-4.6 GHz, but still saw 103ºC before reducing in power to 225 W.

For the first motherboard on the 0x2C microcode, there’s no indication that the frequency reduced when hitting this temperature, and our cooler is easily sufficient for the thermal load, which means that on some level we might be hitting the thermal density limits of wide mathematics processing on Intel’s 14nm. In order to keep temperatures down, new cooling methods have to be used, regardless of motherboard or microcode.

I noted that Intel has reduced the air gap inside the CPU package, with the whole z-height reduced from 4.48 mm to 4.36 mm. It’s a small change, meaning less material for thermal energy to transfer through, improving cooling.

Users looking to overclock on these processors are going to have to implement a strong AVX-512 offset here.

A Rock(et) and A Hard Place, But The Only Option Available

Rocket Lake is the product of an idea to backport a design, and ensures that the popular market segment of consumer processors is closer to the leading edge of Intel’s design, despite the unavailability of Intel’s latest process node to desktop-class hardware.

Going forward, Intel has (in not so many words) committed to a less rigid philosophy than the past – use the right design on the right process node, rather than tying the two together. Rocket Lake is arguably the first product coming from that philosophy, despite being a later part that came after core was designed in the first place. But Intel will measure its success as an initial yard stick to similar endeavors in the future. And it will succeed, for reasons external to Intel.

Our results clearly show that Intel’s performance, while substantial, still trails its main competitor, AMD. In a core-for-core comparison, Intel is slightly slower and a lot more inefficient. The smart money would be to get the AMD processor. However, due to high demand and prioritizing commercial and enterprise contracts, the only parts readily available on retail shelves right now are from Intel. Any user looking to buy or build a PC today has to dodge, duck, dip, dive and dodge their way to find one for sale, and also hope that it is not at a vastly inflated price. The less stressful solution would be to buy Intel, and use Intel’s latest platform in Rocket Lake.

Normally this is the point where I’d conclude with a comment on what to recommend. But the clear answer during this chip crunch is to buy the processor you can find at a reasonable price. We don’t have official pricing on Rocket Lake just yet, but if a retailer was happy to sell units before the official launch, then perhaps there will be sufficient number out there to go around.