We’re using the LLVM 11.0.0 release as the build target version, and we’re compiling Clang, libc++abi, LLDB, Compiler-RT and LLD using GCC 10.2 (self-compiled). To avoid any concerns about I/O we’re building things on a ramdisk. We’re measuring the actual build time and don’t include the configuration phase as usually in the real world that doesn’t happen repeatedly. 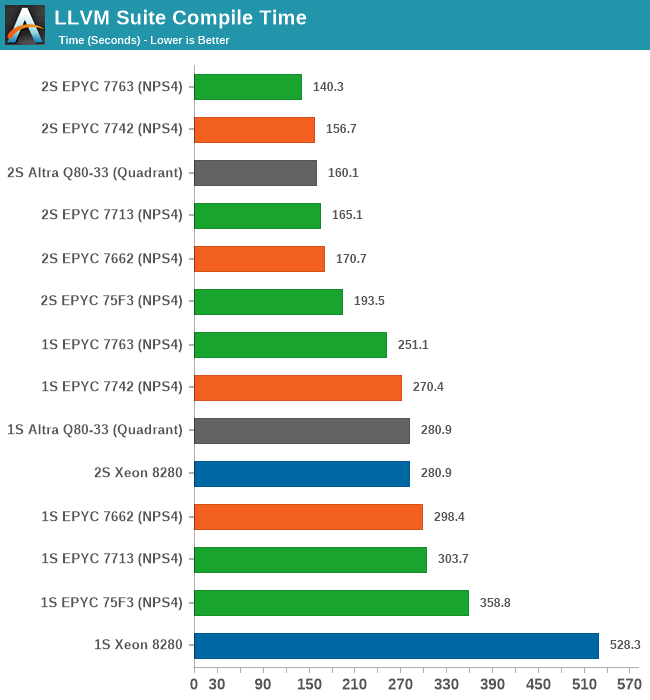 For the new Milan chips, the results are a bit mixed. The higher-power 7763 takes a lead with a +10.5% improvement over the 7742, however the 7713 doesn’t manage to keep up with that predecessor.

The 1S vs 2S scores are interesting as the 2S figures showcase the new Milan chips in a better light due to the higher single-threaded performance of the Zen3 cores. The compilation here also has linking phases which are single-thread performance bottle-necked. This results in scenarios such as the 7713 losing to the 7662 in 1S comparisons, however winning out against the same chip in the 2S comparison, as it’s able to make that advantage count for more.

It’s also great to see the 75F3 keep up with the 64-core counterparts at around 72% of the top-SKU performance. 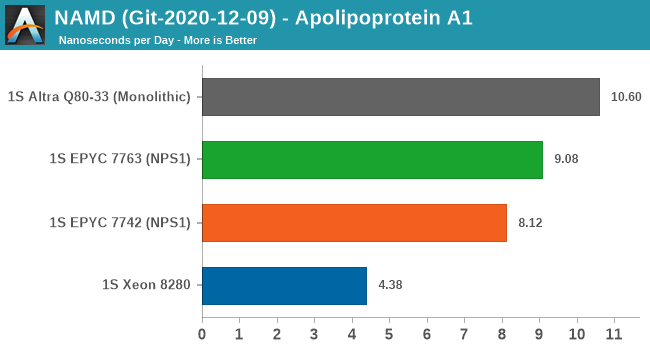 Finally, in NAMD, this is more of a core-local compute workload. We see the 7763 outperform the 7742 by +11.8%, however the Milan chip is still outperformed by the higher core compute capacity of the 80-core Altra chip.

Generally, I have my reservations about NAMD as a benchmark due to its multicore vs MPI variants and scaling anomalies, on top of the whole topic of the benchmark having a completely different algorithm for AVX512 processors.