Moving down to the more professional and basic Pro series, the MSI Z590 A Pro and the Z590 Pro WiFi blend basic with stylish. It uses a black ATX sized PCB, with white straight lines patterning, and black/silver accented heatsinks. The only difference between both models is the inclusion of a Wi-Fi 6E CNVi. 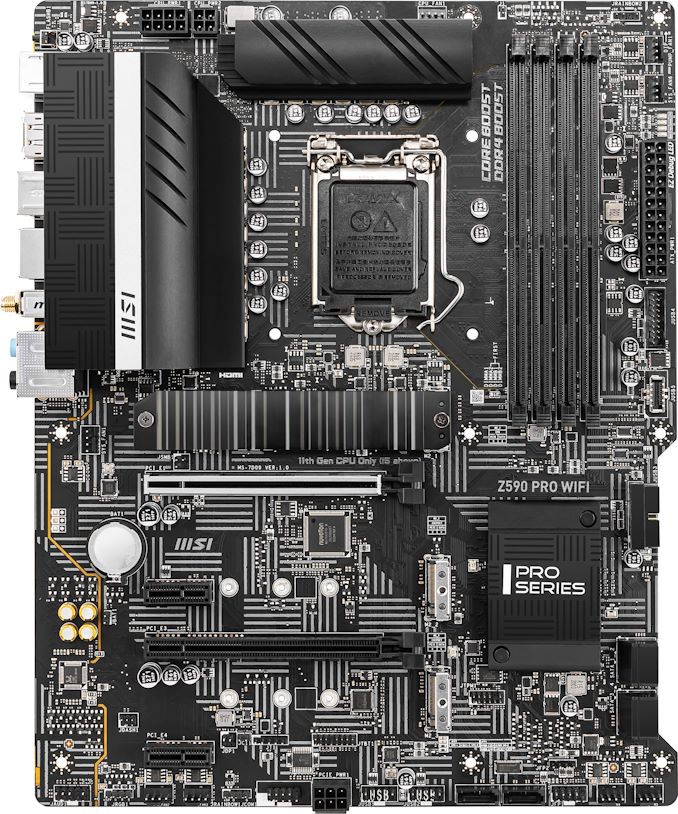 Dominating the lower portion of the board are two full-length PCIe slots, with the top slot operating at PCIe 4.0 x16, a second full-length slot locked down at PCIe 3.0 x4, and two PCIe 3.0 x1 slots. MSI includes plenty of storage connectivity, with one PCIe 4.0 x4 and two PCIe 3.0/SATA M.2 slots. There are also six SATA ports in total, with four straight angled with a cut-out into the PCB for better cable management and two straight-angled ports located at the bottom edge of the board. For memory, MSI includes four memory slots capable of installing up to 128 GB, with speeds of up to DDR4-5333.

On the rear panel is a single USB 3.2 G2 Type-C, one USB 3.2 G2 Type-A, two USB 3.2 G1 Type-A, and four USB 2.0 ports. The Wi-Fi variant includes an Intel AX210 Wi-Fi 6E CNVi, while both models include an Intel I225-V 2.5 GbE controller. MSI also includes a DisplayPort and HDMI video output pairing for users that intend to use Intel's integrated graphics. A PS/2 combo keyboard and mouse port and a small clear CMOS switch finish off the rear panel.