There was a renowned emphasis on displays at the show - as Anand highlighted with his DLP primer coverage. However, away from the show floors and prying eyes of us mere mortals, there were several demos that made us very excited. Prolink showed us our first look at 6600 non-GT SLI in action. PixelView's engineers were able to snap us a couple of pictures of the demo below. 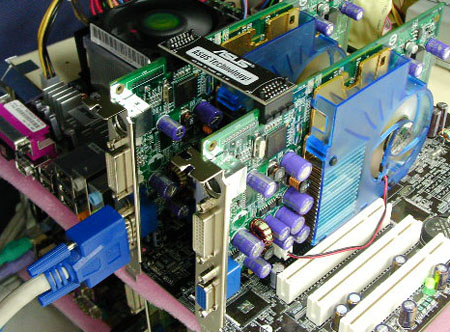 Looking closely, you can see that the 6600 non-GT solution still employs a bridge over the top portion of the card, which means 6600 SLI will still require slightly different video cards than the cards sitting on the shelf today. However, Prolink tells us that the 6600 SLI approach requires relatively little tweaking on the manufacturer's end. It may be possible for softmod BIOS upgrades on existing 6600 cards today that would allow SLI-like performance, although without the bridge PCB, the cards would suffer a decent performance hit.

The specifications for the FutureMark test are as listed below: 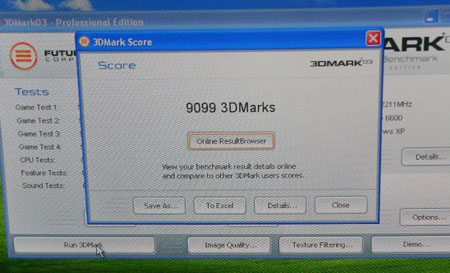 The same configuration using the cards are their default clock of 300/500 scored 8255. Two stock 6600GT video cards yielded a little less than 12000 marks. So, the 1/3 difference in performance is significant, but if Prolink can pull the price point by 1/3 less than that of the GT variants, they will find themselves at a very interesting price point with very little competition. Who else wants an SLI configuration for less than $250?

Prolink is just another one of NVIDIA's partners that continues to layer additional but mildly unsupported features on NVIDIA hardware. You may recall that MSI, Epox and DFI all have produced motherboard variants that enabled "SLI"-like capability on nForce4 Ultra motherboards; some have reportedly achieved this using identical PCB between their nForce4 Ultra and SLI motherboards. Unfortunately, Prolink and these other companies are running a very strong risk of losing support in upcoming NVIDIA driver releases, as claimed by MSI after they halted production of their "DBS" motherboard based on the nForce4 Ultra chipset.

Across the street from the convention center, S3 gave us the opportunity to view their next generation video card lineup - which actually targets more of the low end set top box market than the PC market. In particular, S3's DeltraChrome S8 ULP processor caught our attention as it was running without a heatsink or fan using only 2.5W while running FutureMark. The S8 isn't the fastest GPU in the market, but it doesn't have to be if S3 is aiming for the set top box market - they are aiming for the low hanging HTPC market.

XGI has remained very quiet over the last few months, but they gave us a one-on-one opportunity to look over the upcoming product lineup. The recent shuffle inside the company has made them relook their target market. The company will not focus on competitors like S3 and the low end market. Rather, they will be re-introducing themselves to the retail market with their own video card lineup. Part of the problems that plagued XGI with the Volari line-up was the unwillingness for Tier 1 manufacturers to adopt the chipsets in their video cards.

Recently, however, XGI did aquire Dell as one of their OEM clients for the server markets with the low power, no nonsense Volari Z7 processor. Product managers also mentioned unofficially that they will roll out a plan for OSS Linux drivers for their products. This is great news for both Linux users and XGI alike as NVIDIA could use some strong driver competition.

PowerColor and Sapphire both showed a strong offering on and off the floor this year too. As Anand mentioned earlier, X850 is really shaping up to be the next X800XT PE - low stock, low availability and the likelihood that anyone will be able to afford these cards is turning out to be quite a pipe dream. Furthermore, the fact that the X800 Pro PCIe edition is already approaching EOL has dampened our spirits a little as well. However, the X800 XL is shaping up to be an exceptionally capable replacement. It's still going to be another month before we see retail availability.