The high performance of cards like the Radeon X850 XT Platinum Edition dictate that, even on today's fastest CPUs, they will be CPU bound at resolutions lower than 1600 x 1200. To prove this we've taken three GPU limited benchmarks, Half Life 2, Doom 3 and Far Cry, and showed their performance scaling vs. resolution using the X850 XT PE on an Athlon 64 4000+: 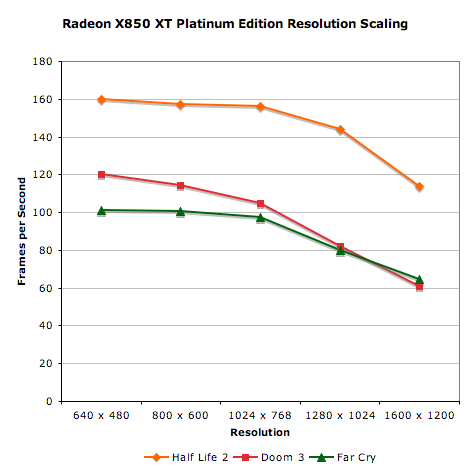 To continue our recent trend of looking at head to head comparisons between GPUs first and then looking at the broad spectrum of performance we begin by evaluating the impact of each one of ATI's new GPUs individually starting with the flagship, the Radeon X850 XT Platinum Edition.