Scaling Down the X800

The basic architecture of the X700 has already been covered, as it is based on the X800's R423 core. The X700 takes it down a notch and runs with only 8 pixel pipelines at a maximum core clock speed of 475MHz on the XT version. The memory interface on the X700 series of cards is 128bit, giving it half the memory bandwidth (on a clock for clock basis) of its big brothers. Oddly, this time around there are two $200 versions of the card. The X700 XT (which we are testing today) has 475/1.05 core/mem clocks and 128MB of RAM. The X700 Pro will launch with 420/864 core/mem clocks and 256MB of RAM. We are definitely interested in testing the performance characteristics of the X700 Pro to determine if the lower clocks are able to take advantage of the larger memory to provide performance on par with its price, but for now we'll just have to settle for X700 XT numbers. ATI will also be producing an X700 card with 400MHz core and 128MB of 700MHz memory that will retail for $149. 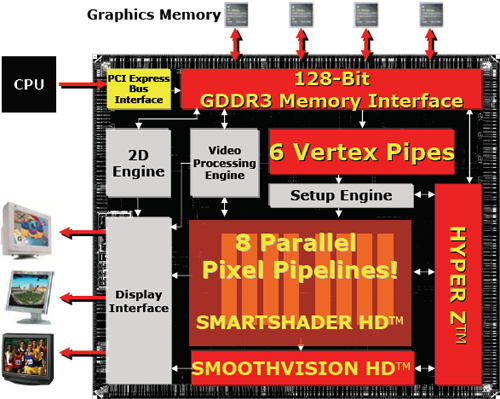 In a very interesting twist, one of the features of R423 that didn't get scaled down was the vertex engine. The RV410 GPU retains all 6 vertex pipelines. This should give it an advantage over NVIDIA's solution in geometry heavy environments, especially where an under powered CPU is involved. NVIDIA only opted to keep 3 of NV40's 6 vertex pipes. Of course, NVIDIA's solution is also capable of VS3.0 (Vertex Shader 3.0) functionality which should help out if developers take advantage of those features. Vertex performance between these midrange cards will have to be an ongoing battle as more and more features are supported and drivers mature. We will also have to come back and examine the cards on an underpowered CPU to see if the potential advantage ATI has in a wider vertex engine manifests itself in gameplay on a midrange priced system.

In addition to scaling down a few key features of the X800, ATI physically scaled down the RV410 by fabbing it on TSMC's 110nm process. This is the same process that is used in the X300 series. This isn't a surprising move, as ATI has been introducing new fab processes on cheaper parts in order to sort out any wrinkles before a brand new architecture is pushed out. NVIDIA also went with the 110nm process on this round.

Interestingly, ATI is pushing it's 110million transistors at a 25MHz lower core clock than NV43. This does give NVIDIA a fillrate advantage, though pure fillrate means very little these days. At first, we were very surprised that ATI didn't push their GPU faster. After all, RV410 is basically a cut down R423 with a die shrink. The X800 XT runs at the same core speed as the 6600 GT (500MHz). If NVIDIA could increase its clock speed from the 6800 series to the narrower and smaller 6600 series, why couldn't ATI do the same when moving to X700 from X800?

In asking ATI about this, we got quite a few answers, the combination of which generally satisfied us. First, ATI's 130nm process is a low-k process. This means that there is less capacitance between metal layers on the die, which gives ATI's GPUs added stability at higher core speeds. Shrinking to a 110nm process and losing the low-k advantage makes this different than a simple die shrink. Also, ATI's X800 series of cards are supplied with external power, while the X700 relies only on the PCIe connection for juice. This could easily explain why the X700 XT is clocked lower than the X800 XT, and the extra vertex processing power could help explain why NVIDIA was able to hit a higher clock speed than ATI. We could be wrong, but without knowing both companies' yield rates and power consumption we really can't say for sure why things ended up this way.

The X700 retains the video processing features of the X800 as well, and we are starting to see both ATI and NVIDIA gearing up for some exciting things in video. Additionally, ATI has stated that their X700 is capable of running stable passively cooled in a BTX system (albeit with a massive passive heatsink). This, of course, is something the X800 cannot do. ATI has said that initial BTX versions of their cards will be OEM only as that will be where BTX makes its first mark.

Now that we know a little more about the X700, lets take a look at the numbers.