The display of the P30s is something I was extremely concerned about, and hoping that Huawei would be able to execute correctly. Much of the concern was due to the poor showing of the Mate 20 Pro display which in my review variant was in the form of an LG panel with a MagnaChip DDIC. Mate 20 Pro units with a BOE panel with a Synaptics DDIC reportedly had many fewer issues as well as less power-consumption.

The P30 and P30 Pro continues to see Huawei using various vendors for the displays. The smaller P30 seemingly is using a Samsung panel with a MagnaChip DDIC if I’m not mistaken. The larger P30 Pro dual-sources the panel from LG and BOE again, however this time around the DDIC for both is provided by Novatek, which is a major design win for the company. I wasn’t actually able to identify which variant my P30 Pro had, however I also wasn’t able to identify any glaring issues with the panel or DDIC behaviour.

Another major issue with the Mate 20 Pro OLED display was quite stark colour shifting in off-axis viewing angles. Here both P30s don’t suffer nearly as much of this issue, and perform as you’d usually expect. 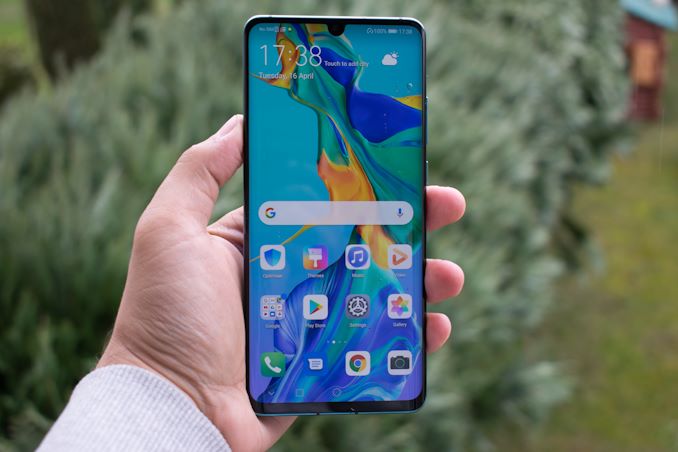 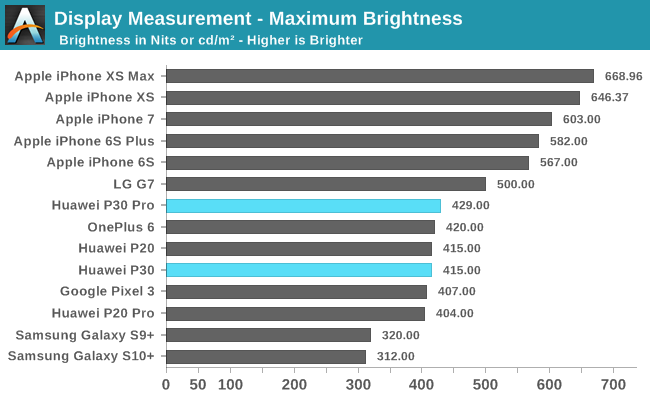 Sunlight legibility of both phones is excellent with auto-brightness boost brightness levels of up to ~570nits. Maximum brightness in manual mode falls in at ~415nits. In effect the brightness characteristics are in line with what we’ve seen in recent Huawei OLED devices.

Huawei doesn’t ship colour management on the P30s and still relies on its display modes. The “Natural” mode targets the sRGB colour space while the “Vivid” mode targets Display P3. Huawei provides colour temperature controls in both modes and you’re able to freely adjust RGB offsets. For the sake of the article we’re measuring the default presets, respectively the nearest preset that targets near a 6500K colour temperature.

In the greyscale accuracy test, both units have some weaknesses in terms of default colour balance. The P30 Pro comes in with an average 6367K CCT, however this isn’t very noticeable as at the higher levels it’s mostly more blue dominated. Most of the error comes from a higher gamma coming in at 2.36. It’s interesting that this gamma is merely high at our standard 200cd/m² measurement point, going to max brightness we see a much more perfect colour balance (except for the highest 10% levels) with a better gamma, but still seeing a non-linear gamma curve.

The smaller P30 has more issues in terms of its colour balance, here we see a strong dominance of green. This is fixable by adjusting the RGB balance. Like the P30 Pro, the P30 tends to have a too high gamma, showcasing also a more odd stepped response.

Colour temperatures across the devices and display modes are best in the default settings, even if they could be tweaked. The P30 Pro’s Vivid mode however is best used with the “Warm” preset. 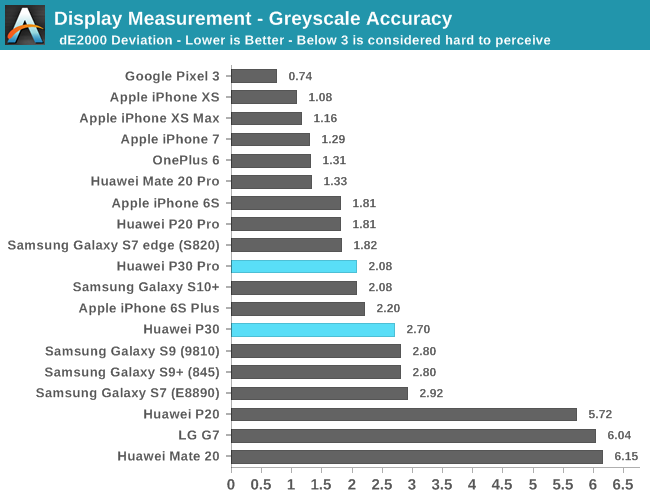 Grayscale accuracy ends up better on the P30 Pro than on the P30. Both devices end up with deltaE2000 figures of 2-2.7, which is reasonable but not great either. The Mate 20 Pro had a notably better calibration, and the devices also fall behind the P20 Pro, but at least it’s not as disastrous as the Mate 20 or P20. 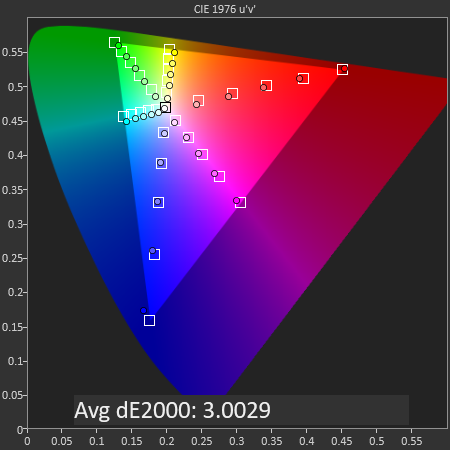 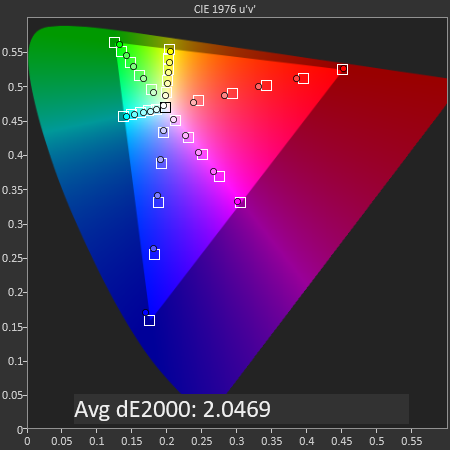 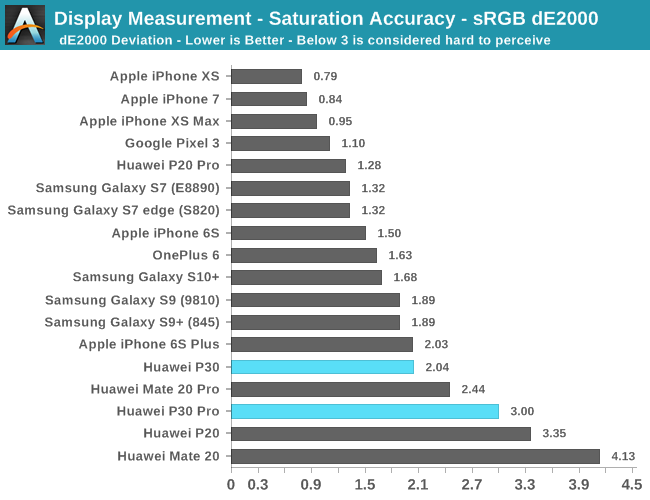 The saturation accuracy on both devices also fall in the dE2000 range of 2-3. The P30 fared better here as on the P30 Pro there was notable inaccurate hues in the yellow and cyan channels, as well as an off-mark blue primary. 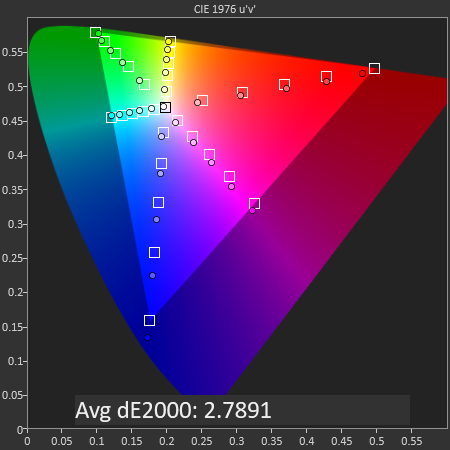 Using Display P3 in the Vivid mode by definition isn’t actually a very accurate colour mode as the phone doesn’t have colour management adapted to the content. Nevertheless, the P30 Pro ended up with a dE2000 of 2.78. Here the biggest errors are in the blue primaries which overshoot the gamut targets, as well as saturation compression in the greens. 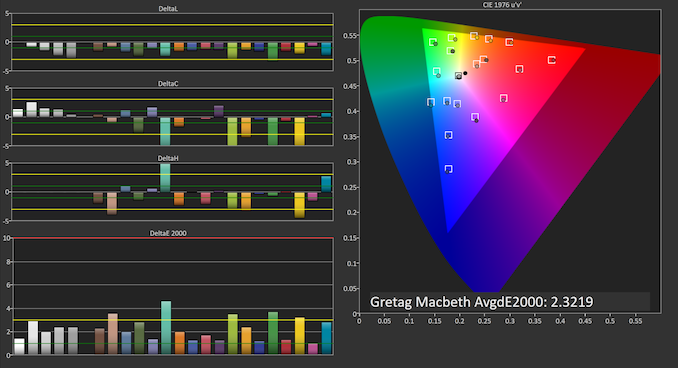 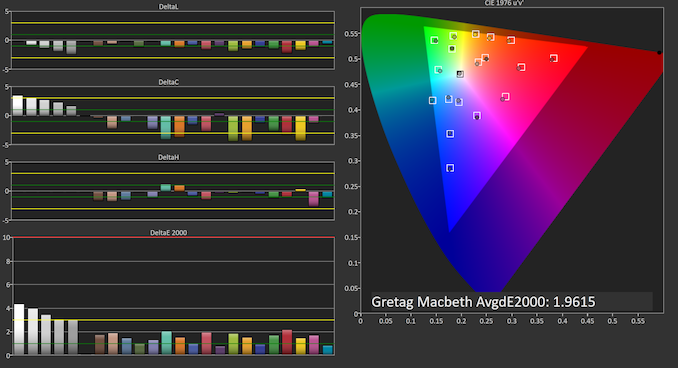 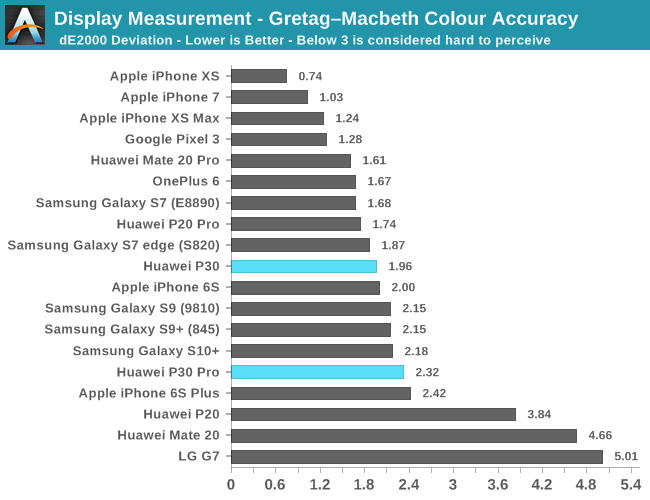 In the Gretag-Macbeth colour set of common tones and skin-tones, the P30 Pro ends up with a dE2000 of 2.3 while the P30 manages a better 1.96. The P30 fares better because of gamma/luminosity being nearer the targets, and while its chromacity error isn’t great, it has less severe outliers than the P30 Pro.

Overall, both P30 screens are good. Their calibration isn’t top-tier, however they also don’t have any glaring issues, such as seen on the Mate 20 or P20. Thanks to the auto-boost function, their brightness is good for outdoor legibility, and the displays also don’t suffer from the weird exaggerated hue shift at off-axis angles such as the Mate 20 Pro.

If I were to criticise the panels in any way, it’s at least on the P30 Pro I would have expected to see a 1440p screen, like on the Mate 20 Pro. After the P30 launch event I was able to talk to Huawei’s VP of product marketing, asking about this precise aspect. I was a bit dismayed when the answer I got for the reason to stick to 1080p was battery life, with the VP insisting it makes a large difference. The Mate 20 Pro’s 1440p failed in terms of battery consumption simply because Huawei wasn’t able to implement it correctly, most notably relying on dual-MIPI DSI interfaces to drive it, instead of using compression with a single DSI interface. DDIC choice is also critical for battery life here; Samsung’s recent Galaxy S10 and S10+ showcase fantastic display power consumption at 1440p that is actually lower than both the P30s at 1080p. I hope in the future Huawei does finally figure out how to implement 1440p correctly, because I do think at screen sizes this big it does give a much needed quality boost, especially for a device that is priced as high end as the P30 Pro.