Today’s launch of the GeForce GTX 1660 marks what is now the 6th member of NVIDIA’s Turing architecture GeForce product stack. At this point NVIDIA should be nearing the end of their launch cycle – traditionally, at least, only potential xx50 cards remain – and in tried and true top-to-bottom fashion, NVIDIA has saved some of their most important, highest volume products for the back-end of the launch cycle. As the 6th Turing video card reviewed, the GeForce GTX 1660 doesn’t come with any new surprises, but it is (once again) a well-executed launch for the company that keeps rolling out Turing technology into progressively cheaper video cards.

With last month’s launch of the GeForce GTX 1660 Ti – NVIDIA’s premium take on the GTX 1660 family – NVIDIA more or less dipped its toes into the mainstream market The $279 was fast for the price and well ahead of the cards it was meant to replace, but the biggest play in the consumer video card market has normally been around the $200 mark, not the $300 mark. So at $219, the GTX 1660 may very well be the most important launch for NVIDIA within the entire desktop product stack, as its destined to become a high-volume workhorse of the GeForce family.

For consumers looking at video cards priced in the $200-$250 range then, the GeForce GTX 1660 sets a new bar for performance and power efficiency. By the numbers, the GTX 1660 delivers around 28% better performance than the GTX 1060 3GB it formally replaces – and more performance still if we start factoring in games where that card was greatly held back by its undersized 3GB memory pool. Or, looking at older 28nm mainstream cards like the GTX 960 and the R9 280 that the GTX 1660 is better suited to upgrade to, the GTX 1660 is ahead by around 2x. 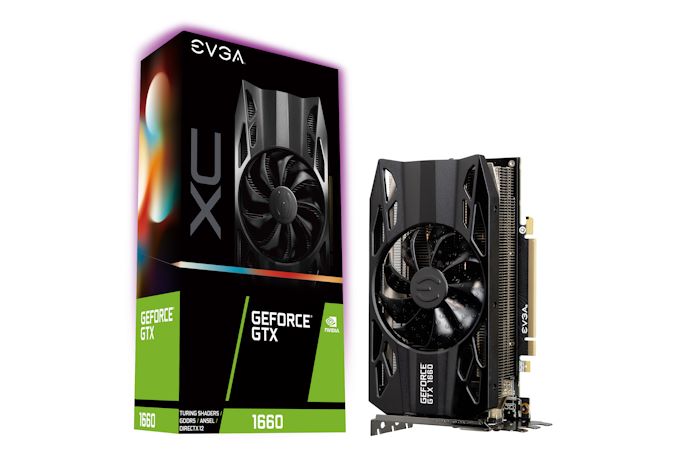 Overall, these performance gains are right on target for what we’d expect from a cut-down TU116 card. Relative to the lead member of the GTX 1660 family, the GTX 1660 Ti, the new GTX 1660 is only 14% slower. Some of this performance cut is due to the cut-down GPU, but more of it comes from the use of slower GDDR5 memory in place of cutting-edge GDDR6. Thankfully, Turing is resilient even in the face of more limited memory bandwidth, and of all the ways NVIDIA has segmented their mainstream products, this is one of the better ways they’ve done it. Unlike the GTX 1060 series, NVIDIA thankfully isn’t playing any games in terms of memory size, so the GTX 1660 is about as future-proof as its older sibling.

As for the competition, as has been the case with all of our other Turing video card launches, the architecture and 12nm process have helped vault NVIDIA to the top. With that said, however, the GTX 1660 is far enough behind the GTX 1660 Ti that the tail-end of NVIDIA’s lineup is no longer leaving AMD in the dust. on average, the GTX 1660 is just 7% ahead of the Radeon RX 590, which is a non-trivial gap but also not a clear tier ahead of AMD’s fastest Polaris video card.

The difference in power efficiency, on the other hand, is just as brutal for AMD as you might expect; GTX 1660 is a bit faster at half the power consumption. RX 590 was designed to take down GTX 1060 6GB at any cost, which it did. But the GTX 1660 launch means that AMD has lost any performance advantage. Still, I won’t be too surprised if AMD keeps the RX 590 around as their GTX 1660 competitor for the rest of this spring, especially if they opt to keep up the game bundles as well.

Looking at the bigger picture, NVIDIA’s xx60 cards have for the last few generations been pitched at the 1080p market, and the GTX 1660 slots into this mindset as well. All throughout our testing, the GTX 1660 had no trouble keeping framerates up even with even our highest image quality settings; only on a single game did it average less than 60fps, and that was on the latest Total War strategy game. Meanwhile at the other end of things, the GTX 1660 actually had enough performance deliver 60fp or better even at 1440p. So while this isn’t a card grossly overpowered for 1080p, it’ll serve 1080p gamers well with a bit of headroom to spare.

As a result of all of these factors, the launch of the GTX 1660 secures NVIDIA’s control of the mainstream video card market, at least for now. The fact that the card isn’t at $199 may yet cost NVIDIA some sales to cheap RX 580 cards – consumers as a whole are somewhat fickle about prices, which is why we have $199 cards instead of $200 cards to begin with – but in terms of performance and power efficiency, the GTX 1660 is unmatched.

Speaking of efficiency, as this was popular in our GeForce GTX 1660 Ti review, I’m going to bring back the Turing versus Pascal performance and positioning chart.

Overall, the perf-per-dollar increase for GTX 1660 versus the GTX 1060 3GB isn’t quite as large as what we saw with the GTX 1660 Ti. However I should also note that I’m using our 28% performance improvement figure here, which excludes Wolfenstein 2, a game the VRAM-limited 3GB card chokes badly on. That game is such an outlier that, if it’s factored in, it drags the average performance improvement up to 47%. Which though impressive, is hardly common. Either way, however, the importance of VRAM capacity is definitely a factor as we start approaching $200 video cards; these cards tend to be at the tail end of the VRAM capacities required to run games without compromising on lower quality textures and other assets.

Last, but not least, we have the matter of EVGA’s GeForce GTX 1660 XC Black GAMING. As this is launch without reference cards, we’re going to see NVIDIA’s board partners hit the ground running with their custom cards. And in true EVGA tradition, their XC Black GAMING is a solid example of what to expect for a $219 baseline GTX 1660 card. 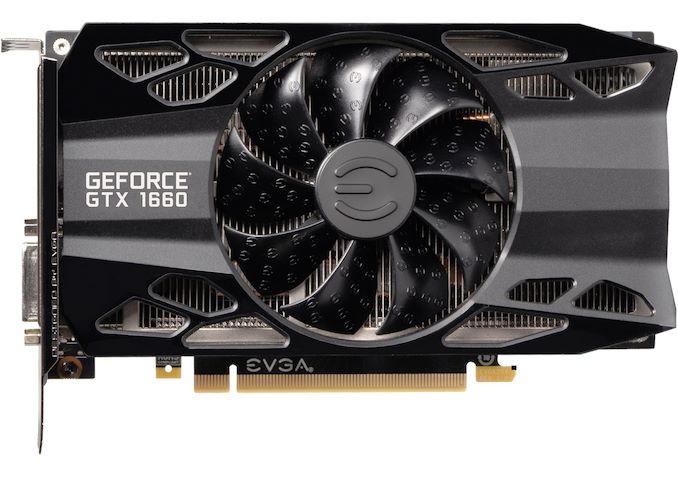 As it happens, this is the same model card we reviewed for the GTX 1660 Ti launch, with the card updated to use NVIDIA’s latest GPU + memory configuration. Meaning it uses the same board and 2.75-slot cooler as its premium Ti counterpart. So GTX 1660 aside, our thoughts are pretty much unchanged on the design.

I have to admit a triple-slot cooler is an odd choice for a 130W card – a standard double-wide card would have been more than sufficient for that kind of TDP – but in a market that’s going to be full of single and dual fan cards it definitely stands out from the crowd; and quite literally so, thanks to its height. Meanwhile I’m not sure there’s much to be said about EVGA’s software that we haven’t said a dozen times before: in EVGA Precision remains some of the best overclocking software on the market. And with such a beefy cooler on this card, it’s certainly begging to be overclocked.

Past that, EVGA’s slightly higher 130W TDP has roughly the same effect on the GTX 1660 as it did on the GTX 1660 Ti, moving performance by only 1%. This isn’t a factory overclocked card – EVGA just gives it a bit more headroom – so it’s a solid indictor that the GTX 1660 isn’t any more TDP-limited than its predecessor. If you want to put more of that TDP headroom to good use, EVGA will of course be glad to sell you a factory overclocked card as well, but I'd argue it’s a lot more fun to do the overclocking yourself, especially as it's a good excuse to take advantage of Turing’s overclocking scanner features.