One of the more complicated aspects of GeForce RTX and Turing is not only the 'RTX' branding, but how all of Turing's features are collectively called the NVIDIA RTX platform. To recap, here is a quick list of the separate but similarly named groupings:

For NGX, it technically falls under the RTX platform, and includes Deep Learning Super Sampling (DLSS). Using a deep neural network (DNN) specific to the game and trained on super high quality 64x supersampled images, or 'ground truth' images, DLSS uses tensor cores to infer high quality antialiased results. In the standard mode, DLSS renders at a lower input sample count, typically 2x less but may depend on the game, and then infers a result, which at target resolution is similar quality to TAA result. A DLSS 2X mode exists, where the input is rendered at the final target resolution and then combined with a larger DLSS network.

Fortunately, GFE is not required for NGX features to work, and all the necessary NGX files will be available via the standard Game Ready drivers, though it's not clear how often DNNs for particular games would be updated. 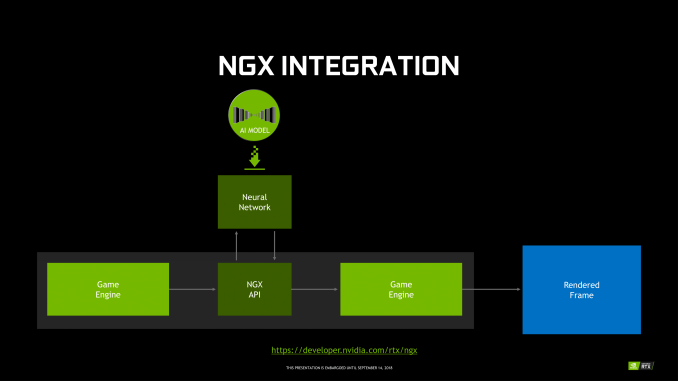 In the case of RTX-OPS, it describes a workload for a frame where both RT and Tensor Cores are utilized; currently, the classic scenario would be with a game with real time ray tracing and DLSS. So by definition, it only accurately measures that type of workload. However, this metric currently does not apply to any game, as DXR has not yet released. For the time being, the metric does not describe performance any publicly available game.

In sum, then the upcoming game support aligns with the following table.