Our solution to the problem is admittedly a bit of a kludge. Nothing is perfect, but we really wanted numbers that were going to get us some useable data, so we needed to get as close to measuring the surface temperature of a processor as possible.

We decided to drill a hole in a heatsink and drop in a thermister.

Our heatsink of choice was the Zalman CNPS7000A-AlCu. In order to get something consistent between processors, we wanted to measure the temperature at the center of the heatsink close to the surface that would contact the processor. We drilled in from the side of the block to the center of the copper strip. Since the retention mechanism was held in by a screw in the center of the side, we had to go in at an angle. Please do not try this at home, as flying metal shards and angled drilling into a block of metal are not things we want to be sued over should something go wrong. Here's a look at what we ended up with: 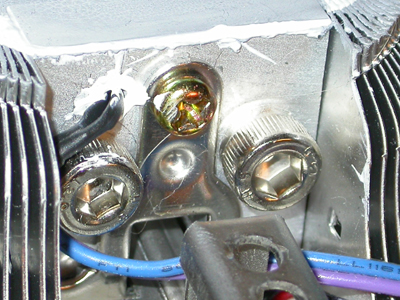 This is a close up of the side of our modded heatsink.


This heatsink fit on all the processors we wanted to test, and we were assured that degrading its cooling ability a little by drilling a hole in it would still allow it to keep the CPUs cool enough to run. We hooked up a thermistor that came with a case we had, and since it was already set up for displaying temps, we forewent building a reader for it ourselves and just ripped out the front panel as well. 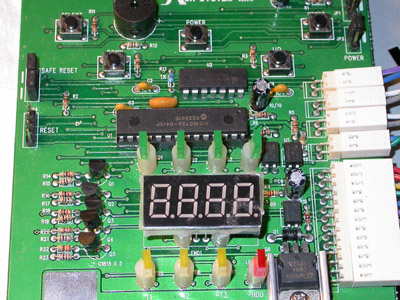 This is the front panel display we used to read the temperatures.


Some care needs to be taken when reading the data that we collected using this heatsink. First of all, this isn't a measure of the heat output of a processor. This is a measurement of the temperature at a specific position in an open system. Having the misfortune of suffering through a thermodynamics class in college isn't always a bad thing (except with respect to one's GPA), but what this means is that these numbers still aren't perfect. The processor is heating the bottom of the heatsink, while the fan is cooling the rest of it. Even though the heat is being distributed through the heatsink, if there is a hot or cold spot very close to the position from which the thermister was reading temperatures, the data could be off for that particular processor. Because we are heating and cooling this object at the same time, the equilibrium temperature we find at this position may not be directly proportional to the heat output of the chip.

But, with all that said, this is still better than using the on die thermistor or monitoring change in system temperature. Our tests were performed in a temperature controlled room with no case on the computer. In order to load the processors, we ran two simultaneous instances of Prime95 for 40 minutes (though temperatures stabilized after about 25). Our idle temperatures were taken after powering up and doing nothing for 30 minutes (no power saving options were enabled).
Index Processor Temperature Comparisons
Tweet
PRINT THIS ARTICLE
POST A COMMENT