The Intel NUC8i7HVK (Hades Canyon) was evaluated using our standard test suite for small form-factor gaming PCs. Not all benchmarks were processed on all the machines due to updates in our testing procedures. Therefore, the list of PCs in each graph might not be the same. In the first section, we will be looking at SYSmark 2014 SE, as well as some of the Futuremark benchmarks. 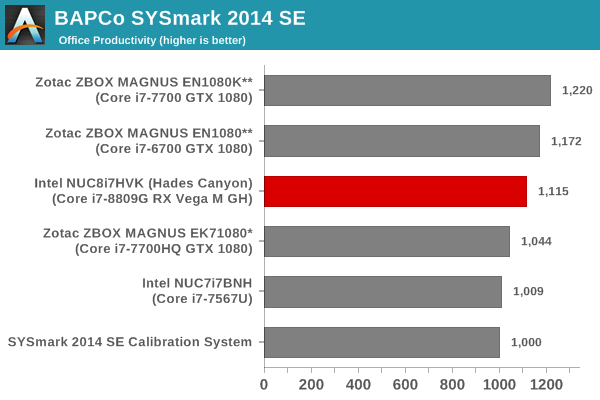 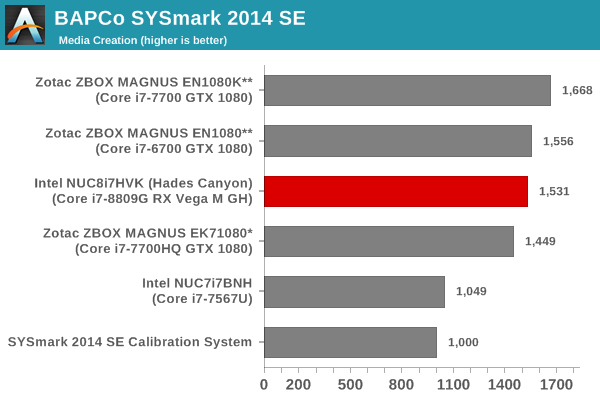 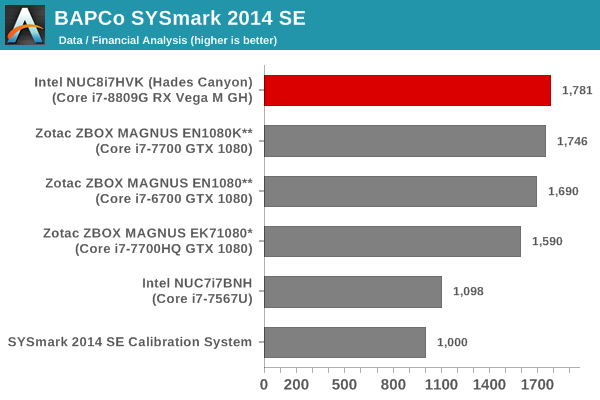 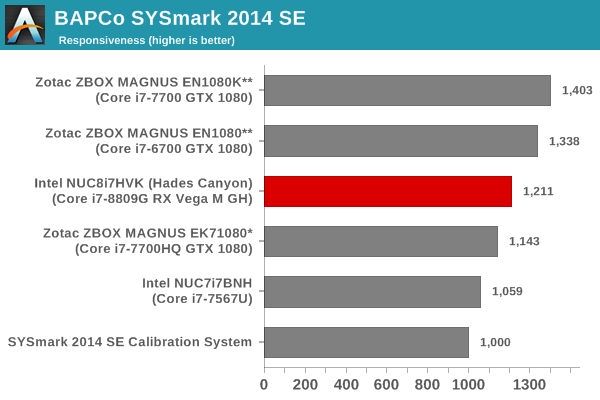 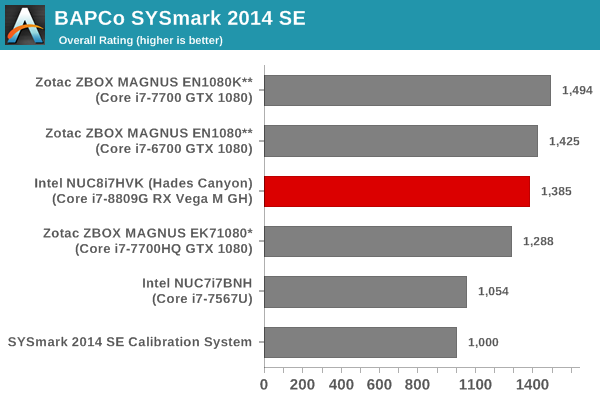 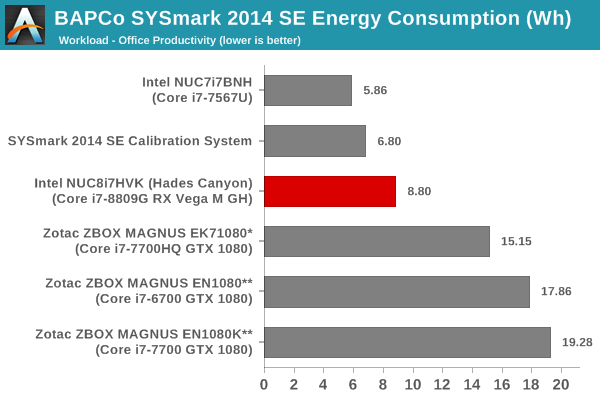 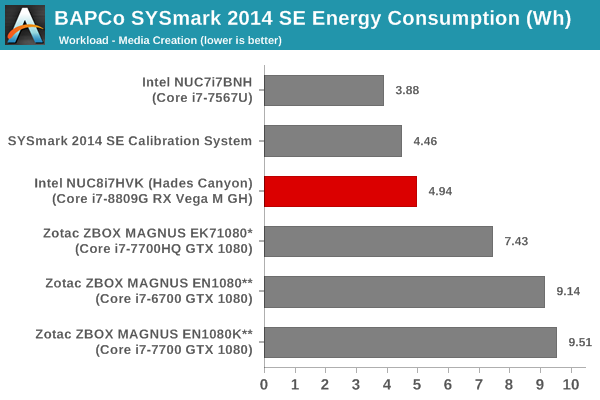 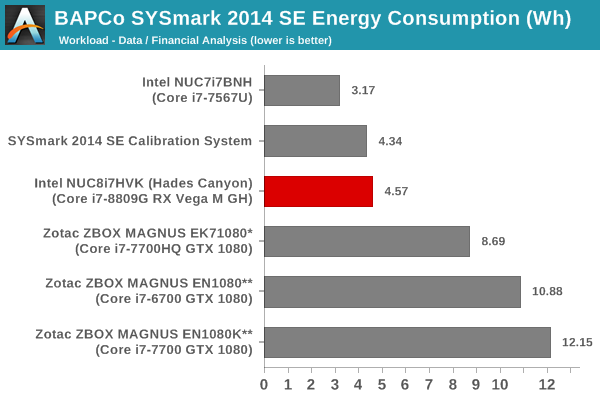 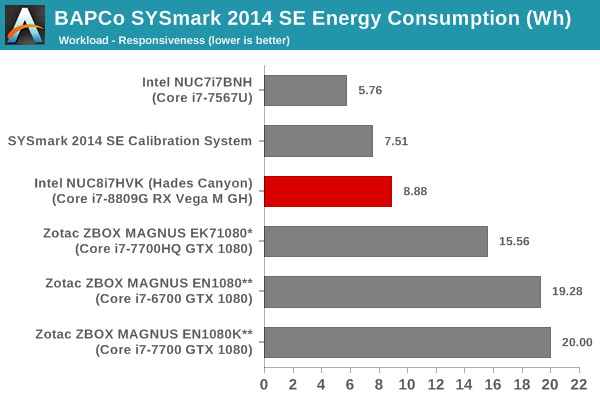 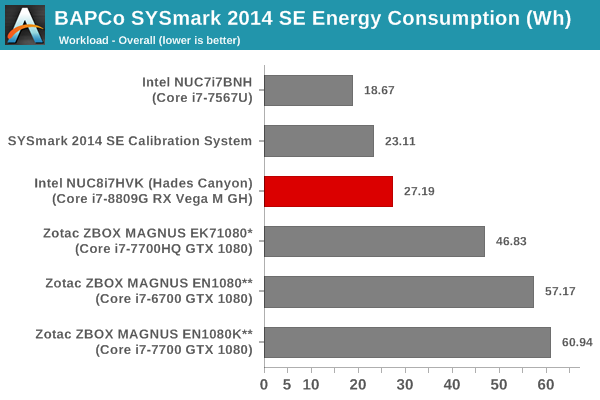 Despite being fully patched for Meltdown and Spectre, the Core i7-8809G manages to outscore the partially patched Core i7-7700HQ-based ZBOX MAGNUS EK71080. It is beat in terms of raw score by the ZBOX MAGNUS PCs using the desktop CPUs (Core i7-6700 and Core i7-7700), but, those PCs consume much more energy to complete the workloads. 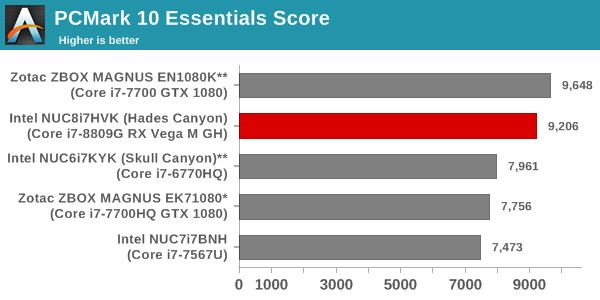 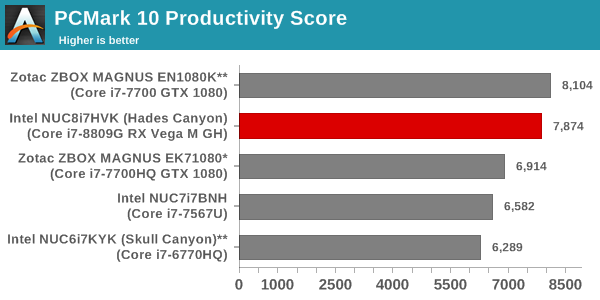 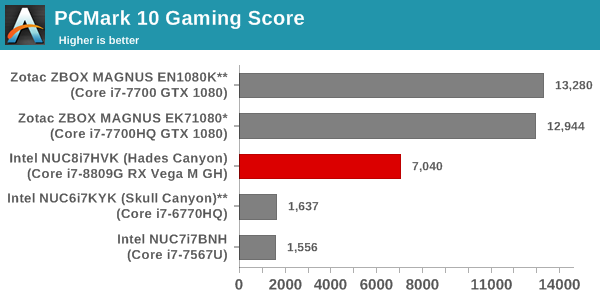 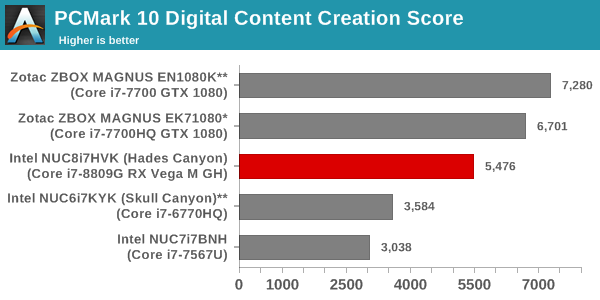 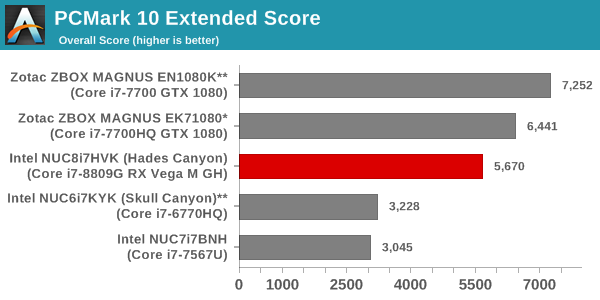 We continue to present PCMark 8 benchmark results (as those have more comparison points) while our PCMark 10 scores database for systems grows in size. PCMark 8 provides various usage scenarios (home, creative and work) and offers ways to benchmark both baseline (CPU-only) as well as OpenCL accelerated (CPU + GPU) performance. We benchmarked select PCs for the OpenCL accelerated performance in all three usage scenarios. These scores are heavily influenced by the CPU in the system. The results should be analyzed while keeping in mind that most of the comparison systems have scores from the days prior to the release of the Meltdown and Spectre patches. 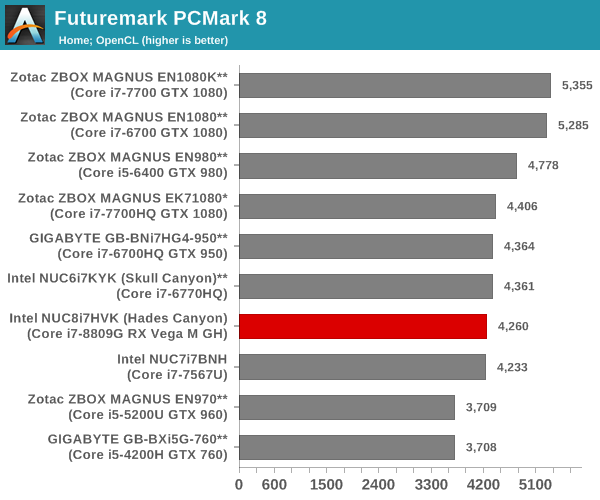 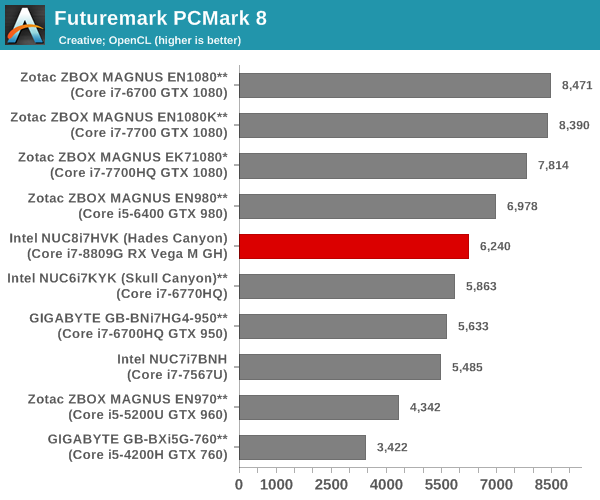 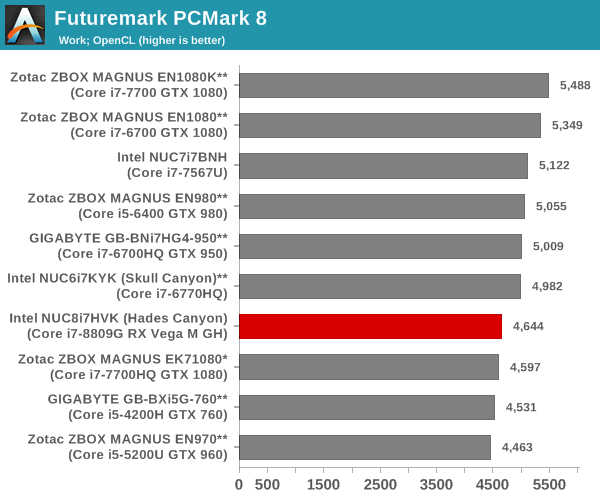 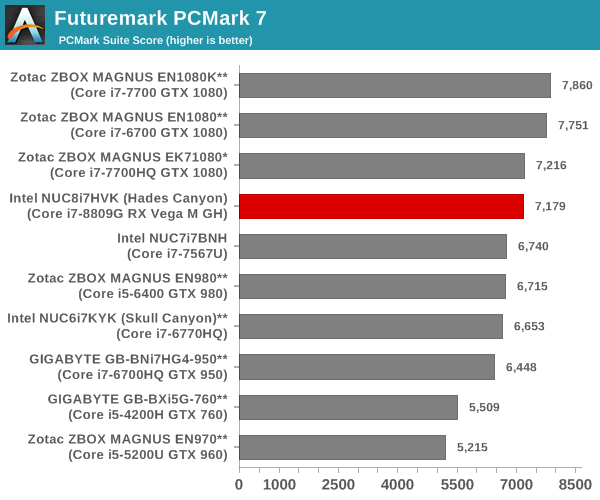 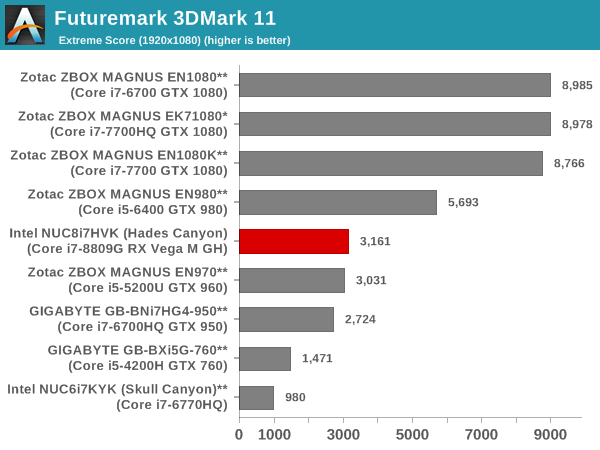 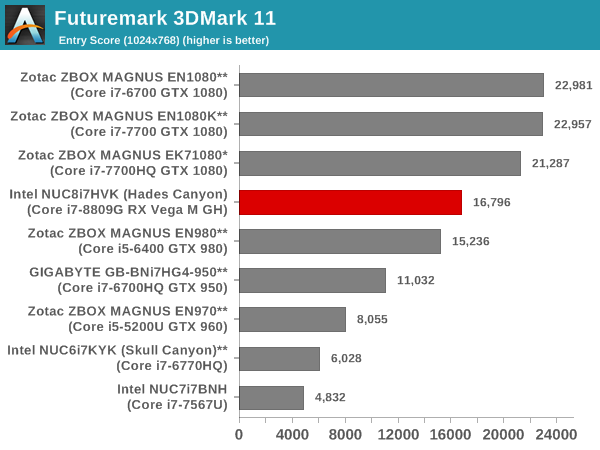 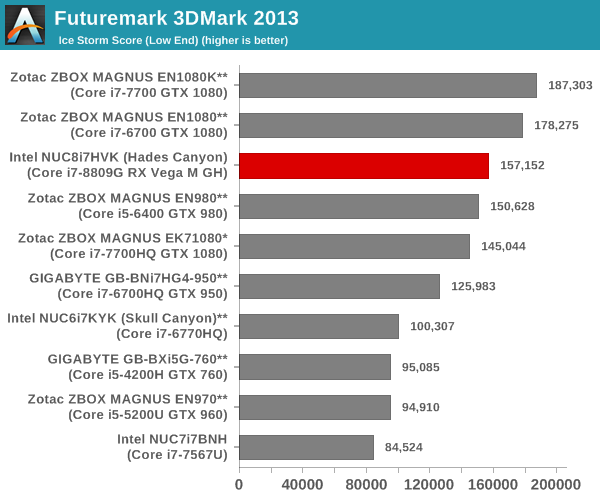 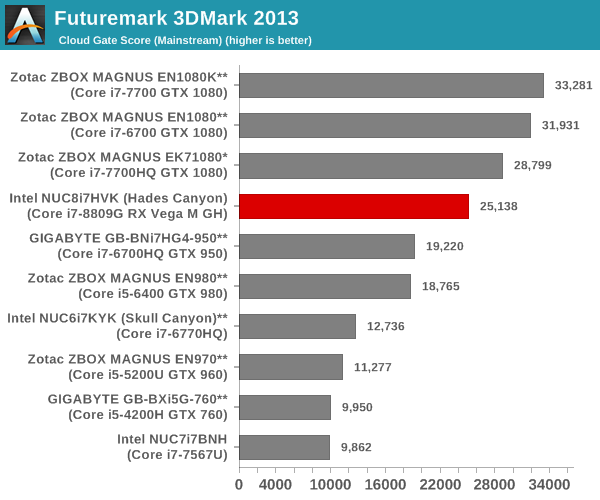 We have moved on from R11.5 to R15 for 3D rendering evaluation. CINEBENCH R15 provides three benchmark modes - OpenGL, single threaded and multi-threaded. Evaluation of select PCs in all three modes provided us the following results. Here, we see the benefits of running the CPU die with a 65W TDP. The scores match or beat the results from the Core i7-7700 in the ZBOX MAGNUS EN1080K. 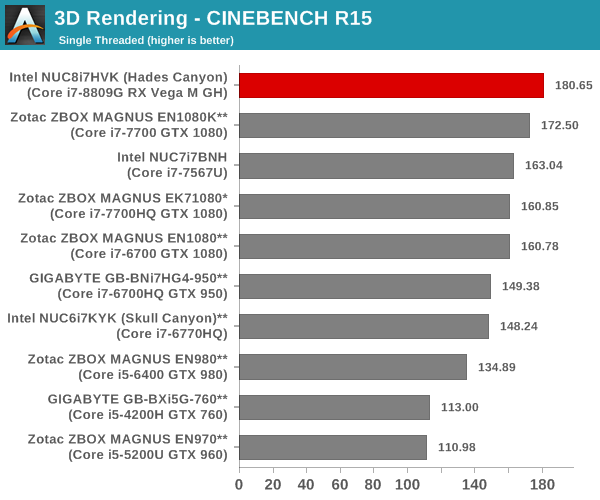 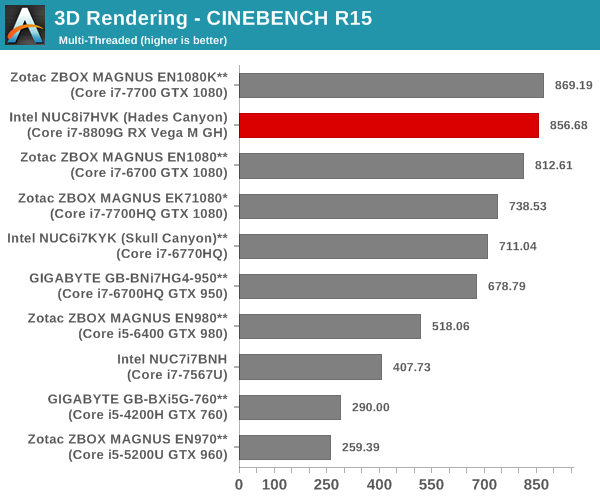 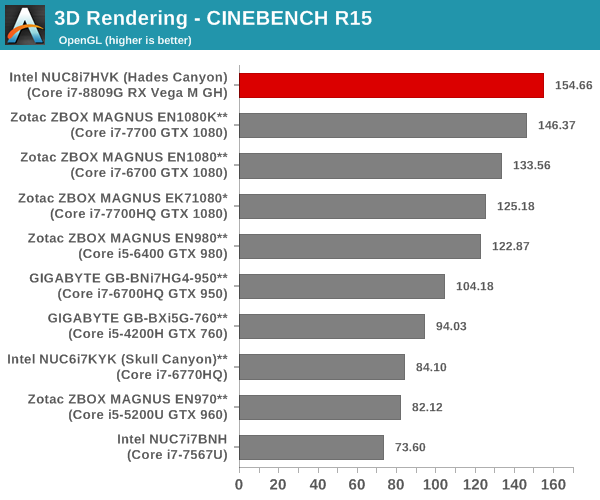