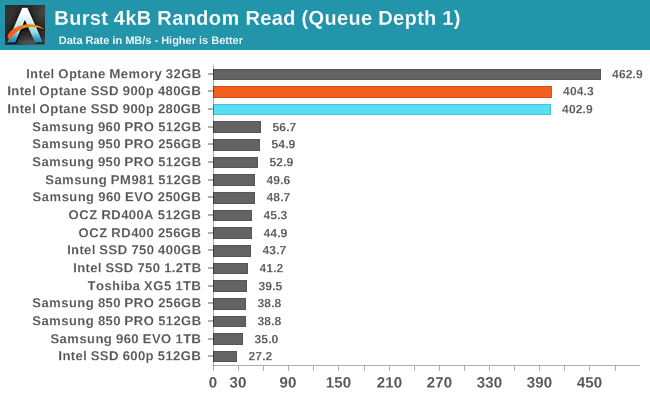 Random reads at queue depth 1 are where Intel's Optane products shine. Compared to the fastest NVMe SSDs using MLC NAND flash, the Optane SSDs aren't quite an order of magnitude faster, but only because the latency of the NVMe protocol over PCIe becomes the bottleneck. Intel's tiny Optane Memory M.2 cache drive is slightly faster in this one benchmark, but the difference hardly matters. 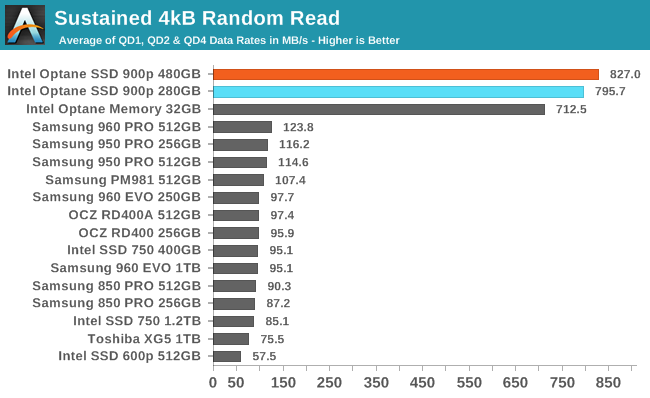 Adding some higher queue depths to the average shows a small speed advantage for the 480GB Optane SSD over the 280GB model, and the Optane Memory M.2 starting to fall behind the larger Optane SSDs. The NAND flash-based SSDs also pick up speed as queue depths grow, but they need to go far beyond QD4 to catch up. 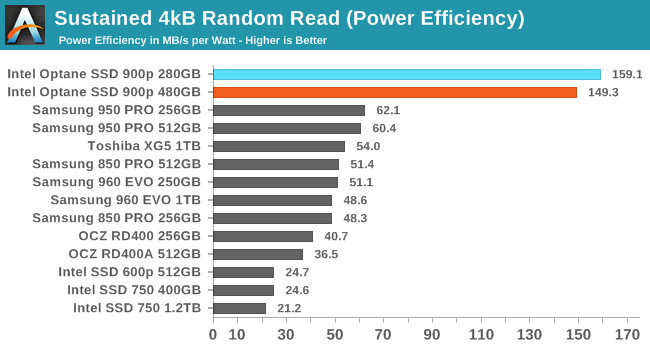 Given how thoroughly the Optane SSDs have shattered the record for random read performance, it's not too surprising to see them at the top of the charts for power efficiency when performing random reads. The 480GB Optane SSD is a bit less efficient than the smaller model because it has to power significantly more 3D XPoint memory chips with only a small performance boost to show for it. Compared to the flash-based SSDs, the Optane SSDs are only about 2.5 times more efficient, despite being about 7 times faster. The performance doesn't come for free.

At low queue depths the two Optane SSDs offer nearly the same random read performance. When they both reach saturation at QD8, the 480GB model has slightly higher performance, and is drawing about 0.85W more power—a 13% power increase for a 7% performance boost. 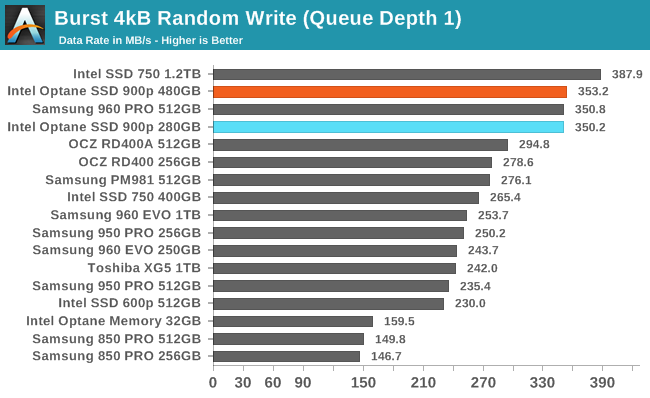 The random write performance at queue depth 1 of the Optane SSDs is great, but not record-setting. Flash-based SSDs can cache write operations in their DRAM and report the command as complete before the data has actually made it to the flash memory. This means that for most flash-based SSDs the burst random write speed is more of a controller benchmark than a test of the storage itself. The Optane SSDs don't have large DRAM caches on the drive and are actually writing to the 3D XPoint memory almost as quickly as the Intel SSD 750 can stash the writes in its DRAM. 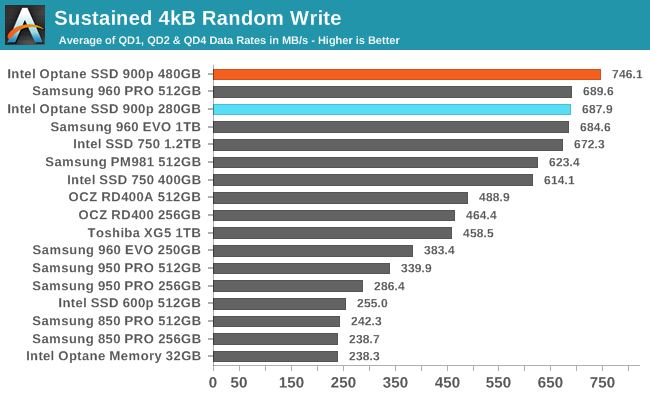 With larger queue depths and test durations long enough to defeat any DRAM-based write caching and many SLC write caches, the Optane SSDs rise to the top. With this second round of testing, the 280GB Optane SSD performed slightly worse than the first run, but it's still essentially tied with the fastest flash-based SSDs. The 480GB model is a tiny bit faster than even the previous record from the 280GB model, putting it about 8% faster than the Samsung 960 PRO. 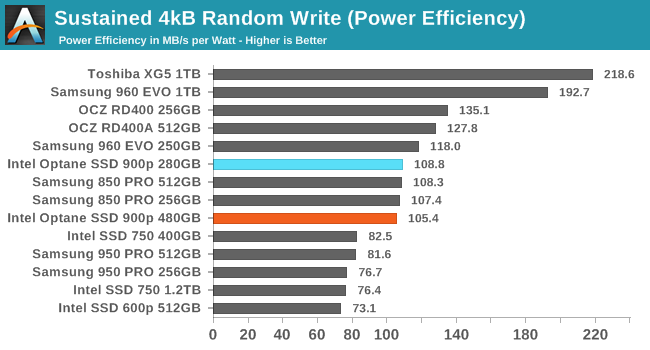 As with random reads, the performance and power consumption gap between the two Optane SSD 900p capacities widens at higher queue depths. With power consumption starting at 5W and climbing to over 10W for the larger model, the Optane SSDs are in a completely different league from M.2 NVMe SSDs, which mostly top out around 4.5W.