It was no secret — Samsung's secret weapon this year was the US unveiling of the SyncMaster 172X. Initial European sources claimed this was only to be a 16ms LCD, but product managers from Samsung confirmed that the response time is actually closer to 12ms, with 6ms Tr and Tf. You might recall that AU Optronics was the first panel manufacturer actually to produce a 16ms LCD panel, albeit 6-bit (262,000 colors, or 16M with dithering). This was very apparent in our Hitachi CML174 review from early this year. Our Samsung sources claim that the 172X panel, made by Samsung, will be a true 8-bit panel capable of 16.7M colors. Since we have had specification inconsistencies with virtually all LCD manufacturers in the past, our methodical approach to such incredible response time claims is, “we will believe it when we see it.” (This should be within a few weeks, when we get a sample.) 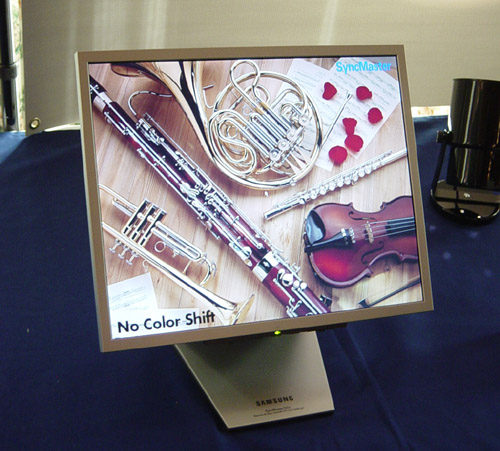 
You might notice the slightly new stand/bezel design. The 172X stand has been slimmed up considerably in relation to the 172T; weight has been even further distributed lower in the stand to keep the monitor stable. Once again, cable management will run outside the rear of the unit. Samsung certainly has the best cable management available right now, so our hats off to them. To sum up the rest of the monitor in a few words, the panel bezel has taken a different direction from the 172T; redesigned and narrowed for stack-ability and multi-display setups (think SyncMaster 191N). The control panel is still present, but the new preferred method for controlling contrast, brightness, etc., is done via Windows and OS 9/X software (we will get more into this during the actual product review). 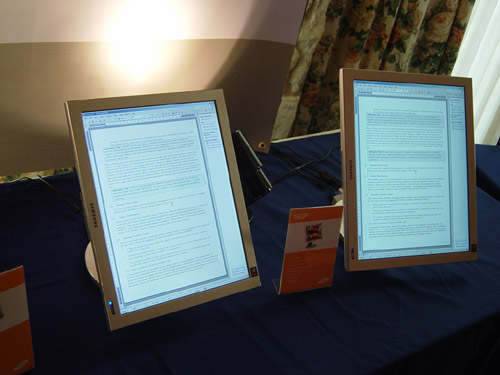 
To our delight, Samsung also unveiled its 193P (above right) to us. For those of you who are horrified that Samsung discontinued the rotate and pivot functions when they upgraded the 191T to the 192T, providence comes in the form of the 193P. This really is the sleekest monitor that we saw at the show. Samsung continues their tradition of placing cable management in the base of the display. As you can see from the rear of the unit, there really isn't much on this monitor besides the panel and the stand. A certain “Applesk” look and feel is present. 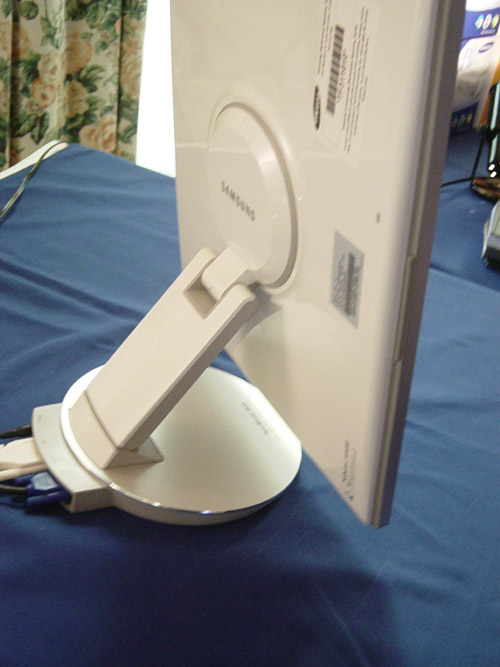 Perhaps the most interesting thing about the 193P is the lack of controls. All controls are done via Windows and Mac based software. The Power button doubles as an Auto synchronization, but everything else must be done via software. Although not many people would spend $900 or more on an LCD for a Linux workstation, you really do not even get the option to with this display. Samsung representatives commented that enough demand for Linux/Unix based drivers would probably result in additional platform ports.

Fortunately, we also got a chance to clear up some of the rumors about contrast ratio inconsistencies with the 173T and the 192T. As you may or may not know, several review sites received review panels with different specifications. As a result, the monitor in our Samsung 192T preview uses a 450:1 contrast ratio LCD, while several other samples used 600:1 (or higher) contrast ratios in their specifications. The resulting conflictions left several consumers and editors fairly confused. Our Samsung PR contact informed us that the specification change has been set back officially to 450:1. Most, if not all, 192T and 173Ts are shipping with panels capable of higher contrast ratios than advertised, but they cannot list anything better than 450:1 contrast ratios due to the existing LCDs with lower contrast ratio that are still being sold. This does not exactly differ much from original speculation, but it is good to hear a firm position from Samsung itself.

Just an interesting side note, last month Samsung and Sony agreed on a joint venture company endeavor, which would make them perhaps the largest competitor for 7th generation LCD TV production. Currently, only four companies have even announced plans for 7G production (AUO, Sharp, LG.Philips, and Samsung-Sony's new MUO).