Phanteks supplies the PH-TC14S inside a dark cardboard box with an abstract aesthetic theme, mostly based on schematic drawings of the cooler itself. It is not a very large box for a cooler that size, but it is very sturdy and the cooler is protected with polystyrene foam packaging, making it nearly impossible to damage during transport. 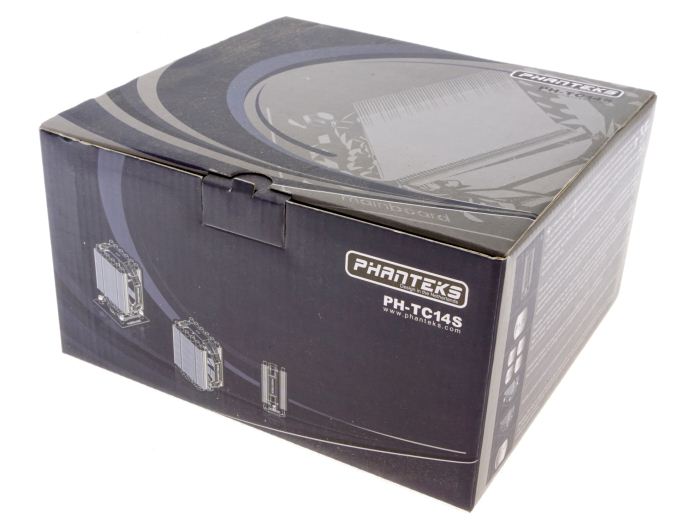 Inside the box we found four manuals, one for each of the most popular languages in the regions that the cooler is being marketed into, the necessary mounting hardware and a syringe with Phanteks PH-NDC thermal compound that should last for at least a couple of applications. 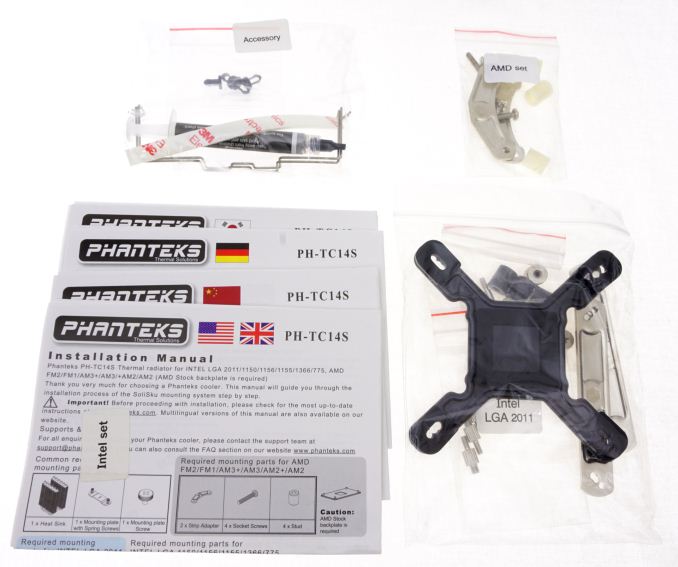 The Phanteks PH-TC14S is the “cheater” of this review, as it is not a single tower but a dual tower cooler design. It technically is a baby version of the monstrous PH-TC14PE that we had a look at a couple of years back. Still, this is Phanteks' only slim 140 mm tower cooler offering, and it is of comparable size to every other cooler in this roundup review. What the designers of Phanteks did was to split the single tower array into two very narrow arrays and place the 140 mm fan in between them. Strangely, the fins are significantly smaller than the fan without any apparent reason, meaning that there will be a significant loss of airflow to every direction. 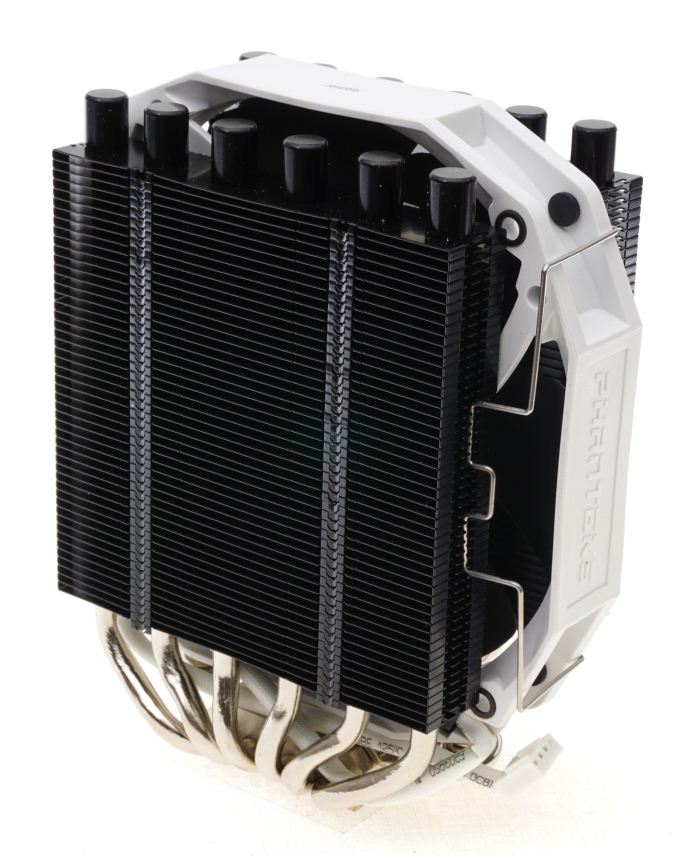 The array fins are very thin and not strong individually, but they are soldered on the thick heatpipes that are only a few millimeters apart from each other. One major feature of the PH-TC14S is its black fins. Phanteks calls this paint job "Physical Antioxidant Thermal Shield" (or Physical Antioxidant Thermal Spraying - we found both in the company's texts) and claims that it enhances thermal performance by both increasing the dissipation rate of the heatsink itself and decreasing the radiation absorption rate from other heat sources. Unlike the PH-TC14PE, the PH-TC14S is available only in black. 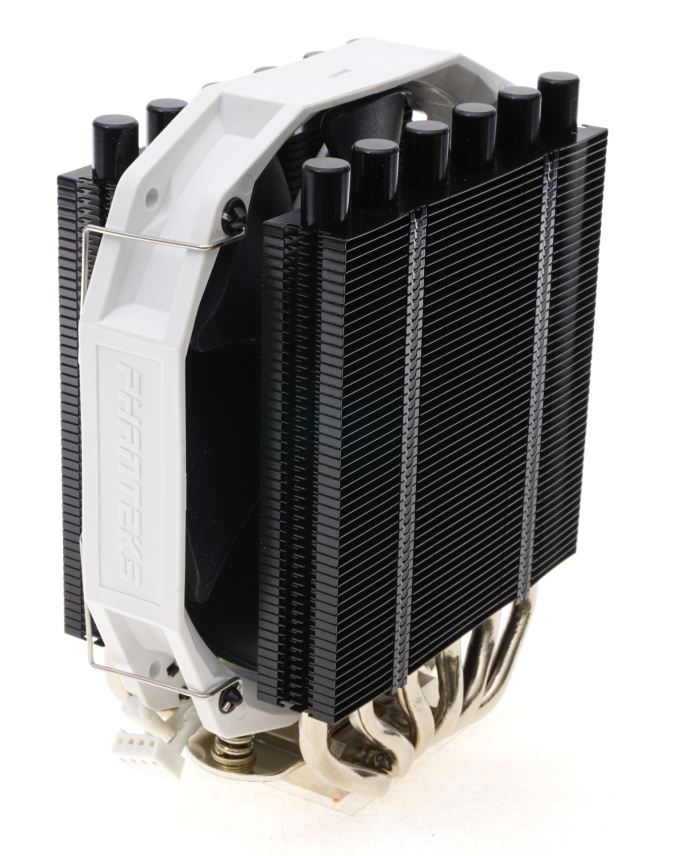 The PH-F140HP fan also is a primary marketing focus of this product. It has the lowest RPM rating of every fan in this review (1300 RPM) but impressively high static pressure specifications (1.64 mm H2O at max speed).

Six thick heatpipes expand to either side of the small base. With the fin arrays placed in parallel, each heatpipe enters both arrays. Although that design appears very symmetric and effective at first, it actually does not appear to be optimal, as the two middle heatpipes that will be right above the CPU core and will be facing the bulk of the heat transfer enter near the fin arrays near the middle, where the fan’s airflow will be the lowest due to the dead spot under its motor. 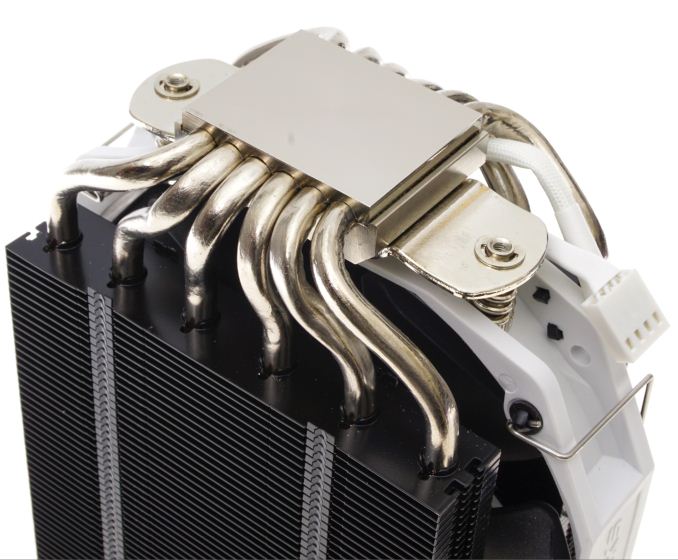 The rectangular copper base of the PH-TC14S and the copper heatpipes are all nickel plated. Like with the majority of modern coolers, the base of the PH-TC14S is made of two parts, a copper contact plate and an aluminum top frame. The lower half of the base handles the thermal energy transfer away from the CPU and to the heatpipes, while the top half only offers mechanical cohesion and support for the steel mounting brackets. The nickel plated base is very smooth and machined down to a near-perfect mirror finish. 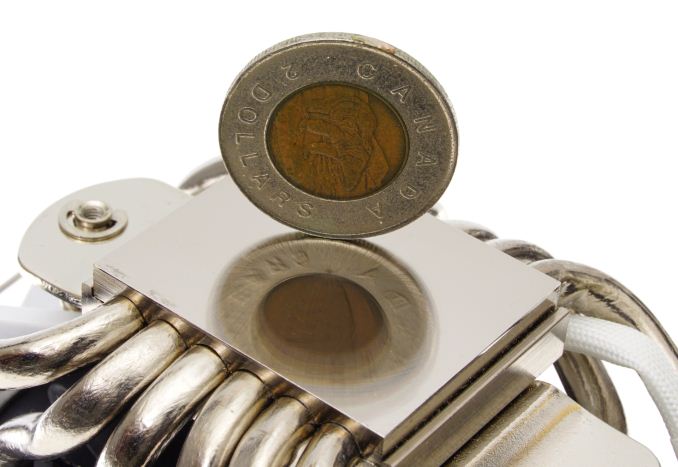