Intel provides no specifications for sequential access performance of the Optane SSD DC P4800X. Buying an Optane SSD for a mostly sequential workload would make very little sense given that sufficiently large flash-based SSDs or RAID arrays can offer plenty of sequential throughput. Nonetheless, it will be interesting to see how much faster the Optane SSD is with sequential transfers instead of random access.

Sequential access is usually tested with 128kB transfers, but this is more of an industry convention and is not based on any workload trend as strong as the tendency for random I/Os to be 4kB. The point of picking a size like 128kB is to have transfers be large enough that they can be striped across multiple controller channels and still involve writing a full page or more to the flash on each channel. Real-world sequential transfer sizes vary widely depending on factors like which application is moving the data or how fragmented the filesystem is.

Even without a large native page size to its 3D XPoint memory, we expect the Optane SSD DC P4800X to exhibit good performance from larger transfers. A large transfer requires the controller to process fewer operations for the same amount of user data, and fewer operations means less protocol overhead on the wire. Based on the random access tests, it appears that the Optane SSD is internally managing the 3D XPoint memory in a way that greatly benefits from transfers being at least 4kB even though the drive emulates a 512B sector size out of the box.

The drives were preconditioned with two full writes using 4kB random writes, so the data on each drive is entirely fragmented. This may limit how much prefetching of user data the drives can perform on the sequential read tests, but they can likely benefit from better locality of access to their internal mapping tables.

The test of sequential read performance at different transfer sizes was conducted at queue depth 1. Each transfer size was used for four minutes, and the throughput was averaged over the final three minutes of each test segment.

For transfer sizes up to 32kB, both Intel drives deliver similar sequential read speeds. Beyond 32kB the P3700 appears to be saturated but also highly inconsistent. The Micron 9100 is plodding along with very low but steadily growing speeds, and by the end of the test it has almost caught up with the Intel P3700. It was at least ten times slower than the Optane SSD until the transfer size reached 64kB. The Optane SSD passes 2GB/s with 128kB transfers and finishes the test at 2.3GB/s.

For testing sequential read speeds at different queue depths, we use the same overall test structure as for random reads: total queue depths of up to 64 are tested using a maximum of four threads. Each thread is reading sequentially but from a different region of the drive, so the read commands the drive receives are not entirely sorted by logical block address. 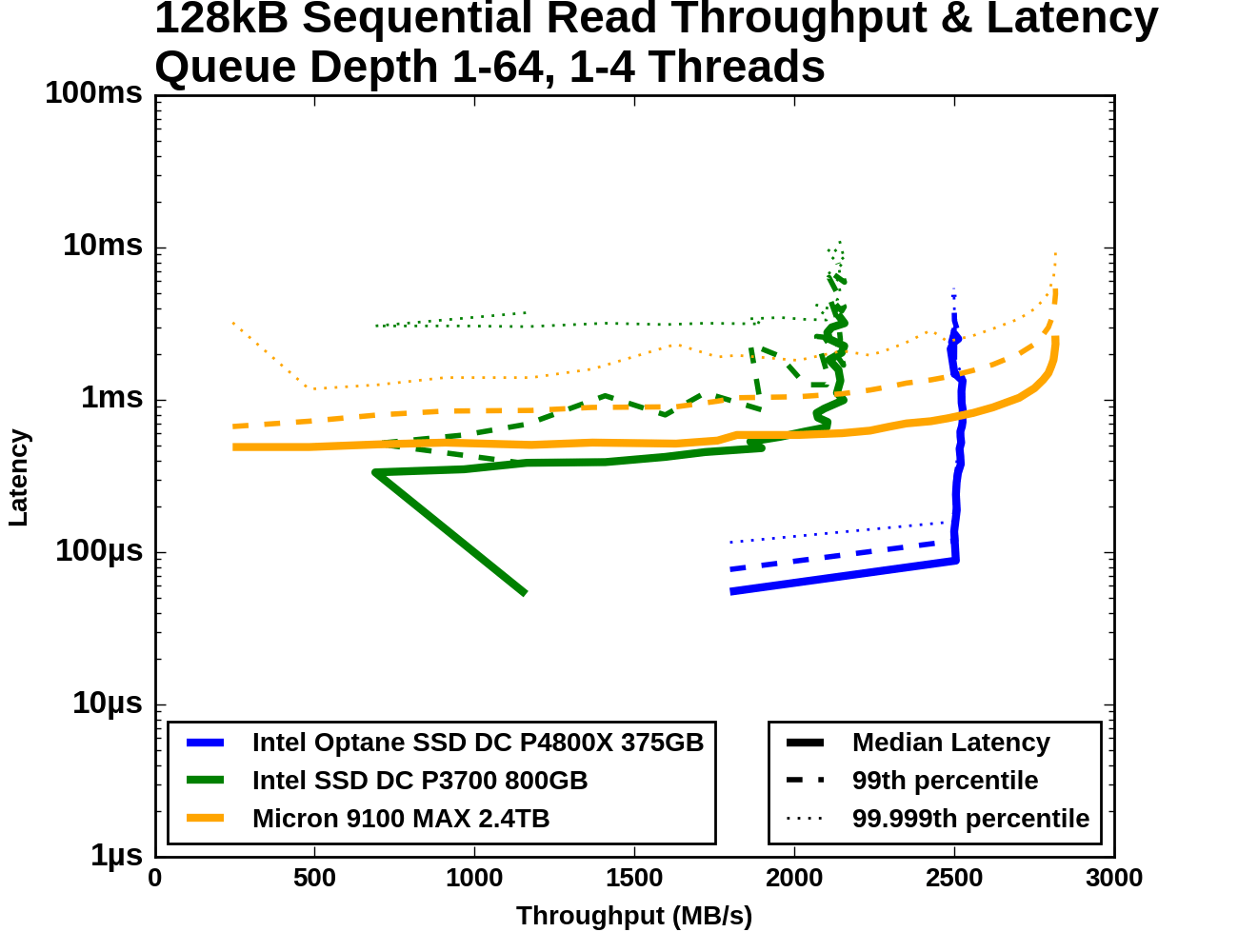 The Optane SSD DC P4800X starts out with a far higher QD1 sequential read speed than either flash SSD can deliver. The Optane SSD's median latency at QD1 is not significantly better than what the Intel P3700 delivers, but the P3700's 99th and 99.999th percentile latencies are at least an order of magnitude worse. Beyond QD1, the Optane SSD saturates while the Intel P3700 takes a temporary hit to throughput and a permanent hit to latency. The Micron 9100 starts out with low throughput and fairly high latency, but with increasing queue depth it manages to eventually surpass the Optane SSD's maximum throughput, albeit with ten times the latency.

The Intel Optane SSD DC P4800X starts this test at 1.8GB/s for QD1, and delivers 2.5GB/s at all higher queue depths. The Intel P3700 performs significantly worse when a second QD1 thread is introduced, but by the time there are four threads reading from the drive the total throughput has recovered. The Intel P3700 saturates a little past QD8, which is where the Micron 9100 passes it. The Micron 9100 then goes on to surpass the Optane SSD's throughput above QD16, but it too has saturated by QD64.

The Optane SSD's latency increases modestly from QD1 to QD2, and then unavoidably increases linearly with queue depth due to the drive being saturated and unable to offer any better throughput. The Micron 9100 starts out with almost ten times the average latency, but is able to hold that mostly constant as it picks up most of its throughput. Once the 9100 passes the Optane SSD in throughput it is delivering slightly better average latency, but substantially higher 99th and 99.999th percentile latencies. The Intel P3700's 99.999th percentile latency is the worst of the three across almost all queue depths, and its 99th percentile latency is only better than the Micron 9100's during the early portions of the test.

When testing sequential writes at varying queue depths, the Intel SSD DC P3700's performance was highly erratic. We did not have sufficient time to determine what was going wrong, so its results have been excluded from the graphs and analysis below. 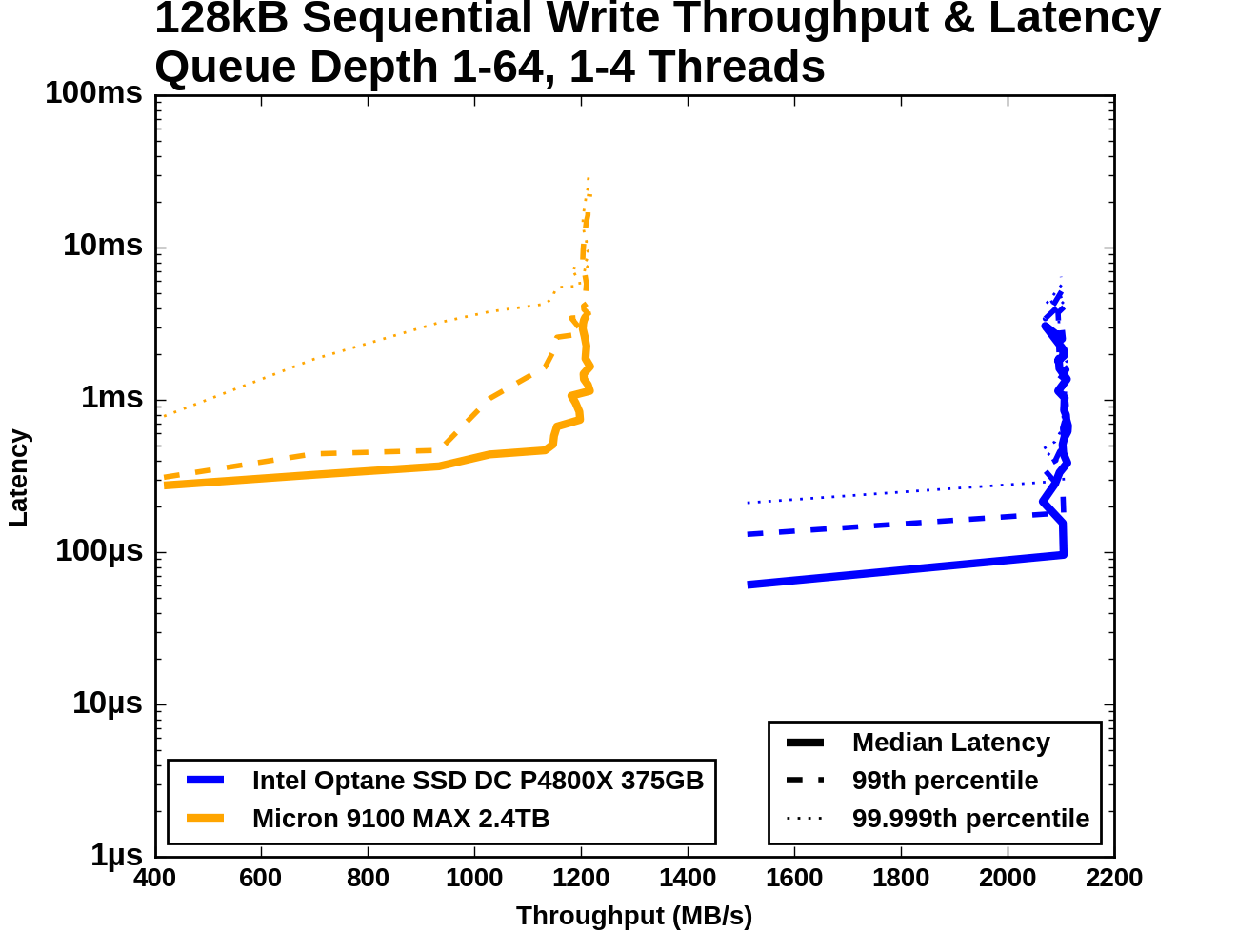 The Optane SSD reaches its maximum throughput at QD2 and maintains it as more threads and higher queue depths are introduced. The Micron 9100 only provides a little over half of the throughput and requires a queue depth of around 6-8 to reach that performance.