A Brief Rundown of Results for Kaby Lake on Desktop

At the time of writing this, we’ve managed to test all three overclockable SKUs and started on the 65W parts as well. Each of the K parts will have their own dedicated reviews which we thoroughly recommend to understand more about the specific products, but here’s a page to give a brief overview of performance.

As was to be expected, especially judging on how Intel described the upgrade between Skylake and Kaby Lake, there is no IPC gain between the two for direct performance. In our testing, a 3.0 GHz Core i7-7700K Kaby Lake part performed identical to a 3.0 GHz Core i7-6700K Skylake processor (HT disabled). The only difference is really in the memory support, given that Skylake supports DDR4-2133 and Kaby Lake supports DDR4-2400, however this has a minor effect on almost all benchmarks.

One thing I will note is that on the motherboards we tested with, some of them implemented the full supported FCLK frequency (1000 MHz) rather than the BIOS base (800 MHz) when it dedicated a K-CPU in. The FCLK issue we documented on Skylake was down to a rush to get the higher speed certified before the launch, but as a result we saw 800 MHz being the main frequency used (and BIOS updates required to even offer 1000 MHz as an ‘overclockable’ option). So while Kaby Lake seems to go at 1000 MHz out of the box, depending on which motherboard you use, from our testing we didn’t see much change in GPU performance when both CPUs are at 3 GHz.

One of Kaby Lake’s big things has been ‘same frequency for less power’, or ‘more frequency for the same power’, compared to Skylake. After all, if you want more performance out of the box but don’t have an IPC gain, then a higher frequency is required. On the box of the i7-7700K it will say that it supports a 4.5 GHz turbo with a 91W TDP, and in our power testing we practically match that number (leaving aside the fact that TDP != power consumption). 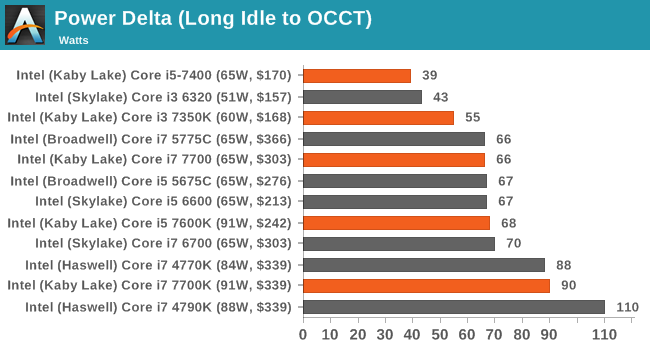 For all the Kaby Lake SKUs we tested, even when manual overclocking, the power consumption of the part was very close to the rated TDP at the box frequency. Normally when we overclock we find that the CPU vendor has vastly overestimated the voltage required to be ‘AnandTech Stable’, but in the case of Kaby Lake we saw numbers that were very close.

Overclocking perceptions will change with Kaby Lake, due to the new AVX Offset feature to be found in the BIOS of each Z270 motherboard. AVX instructions are known to cripple a good overclock, reducing the stability and making it harder to push the non-AVX code if that is the limitation. With Kaby Lake, a user can apply an AVX offset (e.g. -10x) which will reduce the multiplier when an AVX instruction occurs. This means that if an overclock of 4.8 GHz is reached and an AVX Offset of 8x is in play, then the AVX instruction will run at 4.0 GHz, generating less heat and keeping the system stable.

We will have a dedicated overclocking piece going over all our OC results, but the short of it is that all three of our K-SKUs (retail parts) happily reached 4.8 GHz AVX at a reasonable voltage. The i7-7700K was able to hit 4.9 GHz with an AVX offset of -10, and our i5-7600K hit 5.0 GHz even with AVX turned on.

At the end of the day, the Core i7-7700K takes the performance crown for practically every benchmark (there are a few in which the i7-5775C still wins, due to 128MB of eDRAM), and has a tray price of $305. This means it will probably reach shelves around $330-$350, and we haven’t heard about a new stock cooler so it will probably come without one.

The Core i5-7600K still keeps the mantra of how a Core i5 performs almost the same as the Core i7 except in lightly threaded scenarios (ray tracing), but for day to day work it certainly keeps neck and neck. The downside here is that the Core i5-7600K, due to the lack of an IPC increase, is essentially the Core i5-6600K save for a few MHz. You could consider that ours overclocked well, and the temperatures for the overclock were immensely better than the i7-7700K, but for running at stock there’s nothing out of the ordinary here.

For the most part, Kaby Lake doesn’t do much new. Optane Memory support is a plus, but the rest of the product stack is all about moving the power and efficiency curve. What used to get you 3.0 GHz last year now gets you 3.3 GHz, which means saving time doing work or saving money burning less power. There’s also Speed Shift v2, which is a really nice feature, but is limited to Windows 10 users. Arguably looking at the controller side (ALC1220, E2500, Aquantia) is vaguely more interesting. But this is what we kind of expected from an ‘Optimization’ step in the ‘Process, Architecture, Optimization’ way of doing things: we weren’t expecting to be amazed with the product, but nodding and approving of better efficiency. The fact that there’s a new performance champion gives us something to cheer about after the Skylake/Devil’s Canyon discussion is a plus for enthusiasts with a short upgrade cycle.