The Future of Mobile Gaming: New Chips from ATI and NVIDIA

The first chip that ATI is announcing today is the successor to the Radeon IGP 340 chipset announced a little less than a year ago. The Radeon IGP 340 served as an integrated graphics solution for Pentium 4 and Pentium 4-M processors and was met with some success in the market. Although not nearly as prevalent as Intel chipset solutions with discrete graphics parts, the Radeon IGP 340 did manage to find its way into a number of computers from large OEMs such as Compaq and Sony.

The Radeon IGP 7000M chipset hopes to further accelerate the adoption rate of the ATI integrated graphics solutions. The chipset has been revamped some increasing performance in both 2D and 3D situations. Aiding performance in 2D mode is DDR333 support (up from DDR266 support in the Radeon IGP 340); the first to be offered in a mobile IGP solution. The memory controller otherwise remains unchanged, meaning it is still a single channel 64-bit controller.

We have heard rumors of a second Radeon IGP chipset to be launched later this year, closer to summer time. From what we have been hearing the chipset will serve as a high performance integrated graphics chipset including a higher performing integrated video solution and a faster memory controller. This unannounced product has the potential to make the integrated graphics chipset market all the more exciting but for now the Radeon IGP 7000M will have to do. Note that the Radeon IGP 7000M is pin compatible with the IGP 340, making the transition from the old chipset to the newer one less painful for manufacturers. 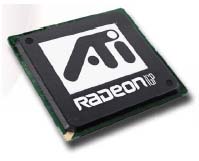 Although the AGP 8x support on the chip will not result in any performance improvements, the boost in core and memory speed should help make the Mobility Radeon 9200 more competitive in the mobile world by improving upon an already wonderful chip. The chip offers the same POWERPLAY functionality present in the Mobility Radeon 9000 as well.