One of the key internal changes that the OnePlus 3T brings to the table is a move from Snapdragon 820 to 821. At a high level, Snapdragon 821 is very similar to 820, and in the case of the OnePlus 3T it's really differentiated by its higher peak frequencies for the CPU and the GPU. Both have four of Qualcomm's Kryo cores in a 2 + 2 cluster configuration, and both use Qualcomm's Adreno 530 GPU. In the OnePlus 3 the performance cluster on the CPU had a peak frequency of 2.15GHz, which is brought up to 2.35GHz on the OnePlus 3T. On paper, this gives a performance improvement of roughly 10%, which is also what Qualcomm states in their marketing materials.

PCMark is a test that the OnePlus 3 performed exceptionally well in. This was due not only to the use of Snapdragon 820, but to software optimizations that OnePlus had made to the OS and the Android Runtime as well. The OnePlus 3T continues this trend, and provides performance improvements across the board. The writing and photo editing tests are the most interesting of the group, as these are tests where software optimizations helped the OnePlus 3 to pull ahead of other competing devices, and the OnePlus 3T pulls ahead even further. It bests the Huawei Mate 8 in the writing test to become the fastest device on record, and the photo editing test improves over the OnePlus 3 which was still the fastest device in the test up until now. 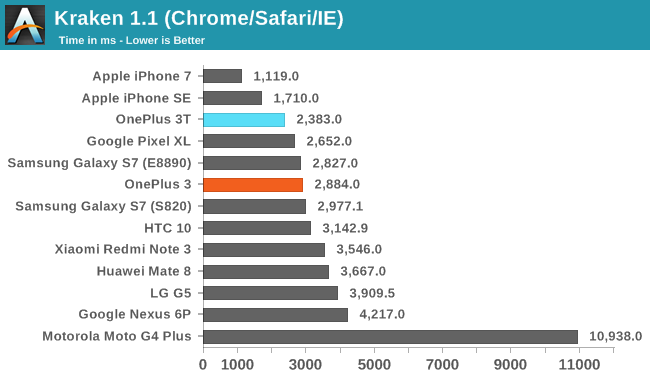 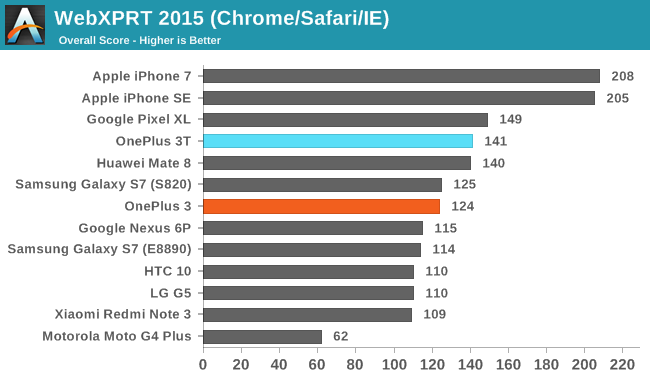 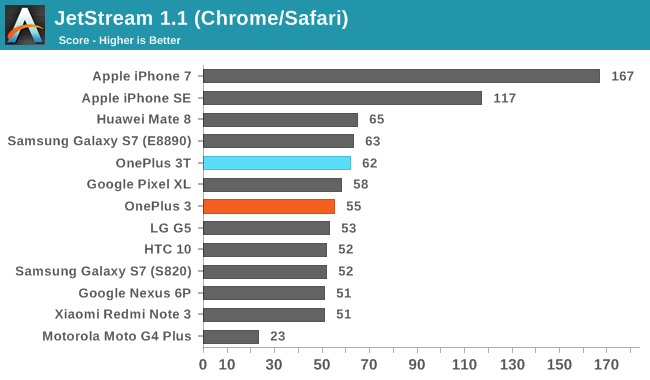 The OnePlus 3T's JavaScript performance benefits from improvements that Google has made in Chrome 54, as well as the increase in peak CPU frequency compared to the OnePlus 3. In the interest of having a fair comparison, I've updated the OnePlus 3's results using the latest version of Chrome so it can also take advantage of optimizations that have been made.

Kraken and WebXPRT 2015 both demonstrate the OnePlus 3T's improved JavaScript performance. The gap is actually a bit larger than one might expect from a 10% increase in CPU frequency, and this could simply be the result of other changes made to the operating system in the newer version of OxygenOS, or changes to the DVFS settings that have been made alongside the change in SoC. Jetstream shows a smaller improvement, but it's in line with what you'd expect to see from the CPU bump.

Ultimately, Snapdragon 821 doesn't come with any mind-blowing performance improvements for CPU-bound applications, but the update does keep OnePlus on par with the competition, and allows them to take advantage of improvements in efficiency and errata fixes in addition to a modest performance uplift. Certain parts of the PCMark test also indicate that the 3T comes with additional improvements at the software level, which will hopefully make their way to the OnePlus 3 with the next major update to OxygenOS, but for now are something you only get on the OnePlus 3T.