Along with the 10% increase in peak CPU clock speeds, the version of Snapdragon 821 in the OnePlus 3T also increases the peak GPU frequency to 653MHz, up from 624MHz in the OnePlus 3. This is a relatively modest improvement, so the corresponding increase in performance will also be rather modest as well. In the interest of merely verifying that performance has improved as expected, I've run 3DMark Sling Shot and GFXBench Car Chase on the OnePlus 3T. 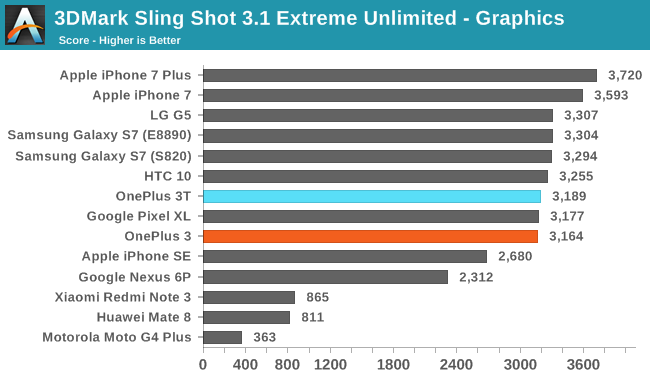 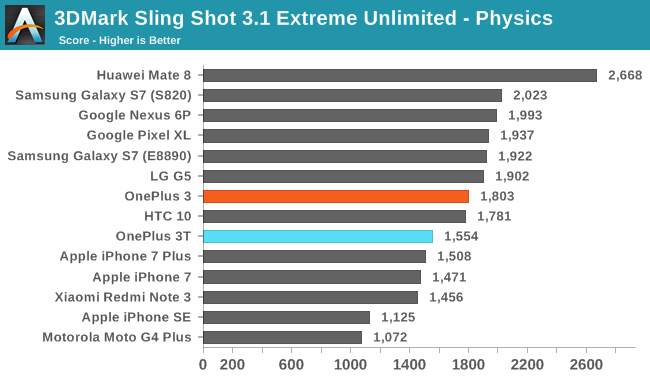 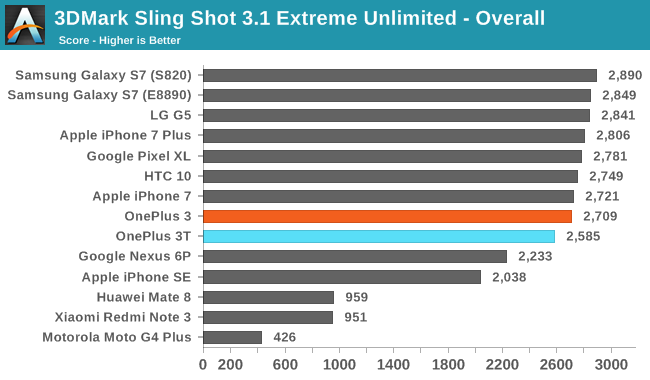 The 3DMark graphics test actually doesn't see much of an improvement on the OnePlus 3T. It may be that I simply got an exceptionally good score on the OnePlus 3, but it is interesting to see such a large gap in the physics test, which should favor the OnePlus 3T with its higher-clocked CPU cores. 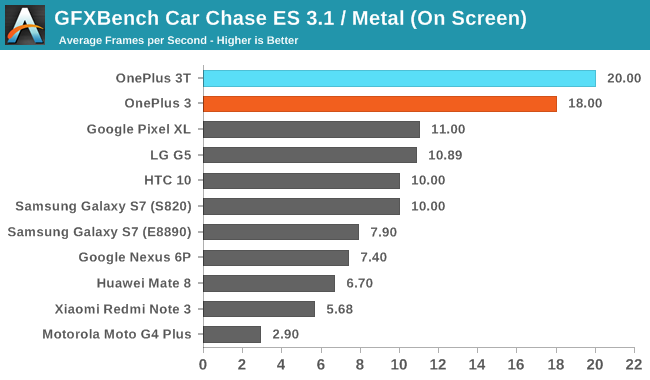 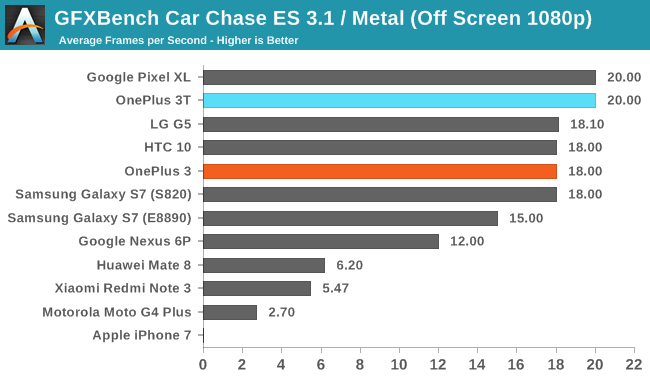 In GFXBench Car Chase the OnePlus 3T shows a performance uplift of around 10% compared to the OnePlus 3. This is slightly higher than expected, but due to the truncation of results in the latest GFXBench this may be slightly exaggerated, which tends to happen when comparing devices that differ in performance by only one or two frames per second.

In our recent review of the Pixel XL one of the problems we ran into was that AndroBench had been broken by the adoption of file-based encryption (FBE) in Android Nougat. AndroBench is the benchmark we use to measure storage performance, and since that time it has been updated with a new version that works on devices that use FBE. However, the results are not comparable to results from AndroBench 4, so going forward we will be using the AndroBench 5 test with a new data set for device results.

As always, our storage test examines the performance for random reads and writes using a 4KB transfer size, and sequential reads and writes using a 256KB transfer size. These settings are chosen to match what actually occurs when an application performs IO operations. Only one IO thread is used, which again mirrors how applications are actually designed in order to reflect the performance that will be seen in real usage instead of reflecting potentially higher speeds that the hardware may be capable of, but that will almost never be encountered in an actual use case.

In addition to the larger amount of internal storage, OnePlus has also adopted F2FS for the filesystem, which is another source of performance improvements, particularly in the case of random write speeds.

With that in mind, the results from AndroBench actually aren't that shocking. In the write tests the 128GB model of the OnePlus 3T is well ahead of every other device, including the 64GB OnePlus 3. Read performance is also improved compared to the OnePlus 3, but not to the same extent.