In our initial look at the HiSilicon Kirin 950 in the Mate 8 review, we were surprised by the SoC’s efficiency. Manufactured on TSMC’s 16nm FinFET+ process, its A72 CPU cores deliver almost twice the performance per watt of the A57 cores in Samsung’s Exynos 7420 at its maximum operating point. Part of this difference comes from the redesigned A72 core—ARM optimized nearly every block to reduce power consumption—while another chunk comes from HiSilicon’s efforts. The Kirin 950 is one of the better implementations of ARM IP we’ve seen.

To see how the Kirin 950 impacts the Honor 8’s battery life, we’ll run it through our standard suite of battery tests. To make the tests accurate and repeatable, we control as many variables as possible, including minimizing background tasks and calibrating each display to 200 nits at 100% APL. 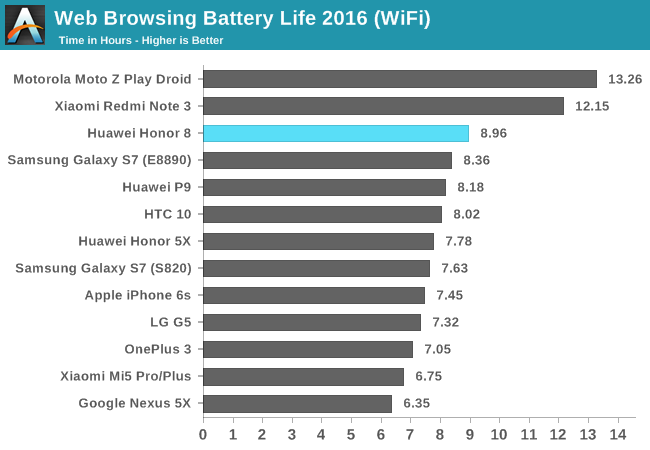 The phone’s display is still the primary power consumer in our browsing tests, but the CPU gets involved too by loading and scrolling through a set of popular pages. In the Wi-Fi browsing test, the Honor 8 lasts almost 9 hours, around 2 hours longer than the OnePlus 3 and Xiaomi Mi 5.

The average platform power (APP) figures in the table above are a rough estimate of each phone’s average power consumption, extrapolated from total runtime and battery capacity, and are not measured quantities. These values are just a different way of visualizing the data in the chart after normalizing for battery size.

We can see the Honor 8 does quite well in this test, generally consuming less power than the phones using the Snapdragon 820 SoC. There’s some variation due to display size and type, but the Honor 8 averages between 11% less than the HTC 10 and and 26% less than the Xiaomi Mi5 Pro. 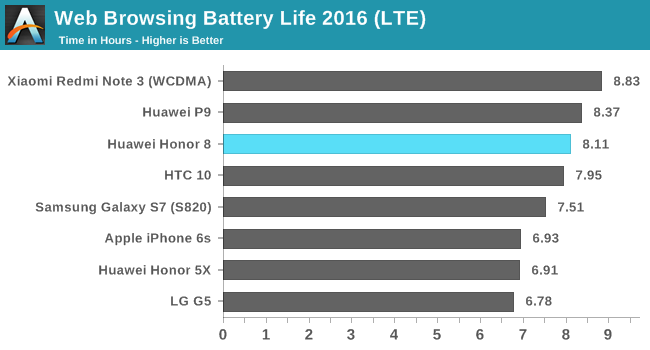 Switching over to the LTE radio, the Honor 8 still manages to last just over 8 hours, only about a 9% drop relative to using Wi-Fi. The HTC 10 and Galaxy S7 with Snapdragon 820 show even less change in total power consumption, allowing them to close the gap with the Honor 8. The Huawei P9 actually lasts 2% longer in the LTE test, jumping over the Honor 8, but the difference is small enough that it falls within the error level of these tests. 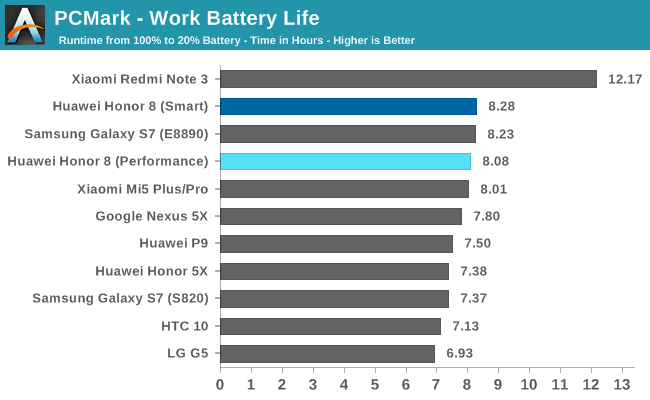 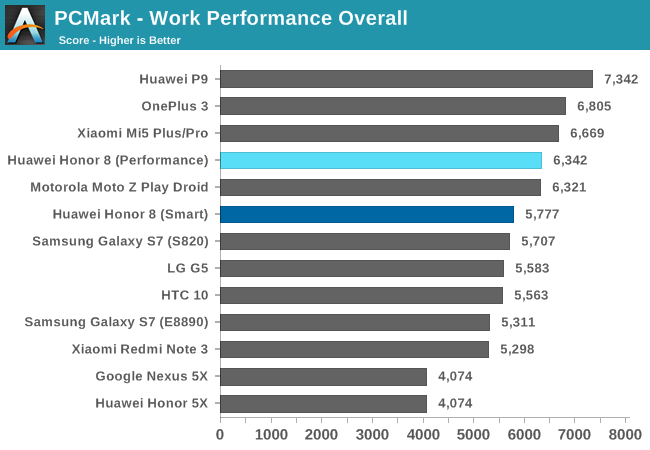 The Honor 8 is no match for the Redmi Note 3 and its big battery in PCMark, but it still lasts more than 8 hours, placing it among the best flagship phones. It manages this feat while still delivering very good performance too. With 8 hours of screen on time while running a continuous workload, the Honor 8 should have no problem lasting a full day on a single charge for most people.

The Honor 8 does manage to last a few minutes longer using its Smart battery mode, but the difference relative to the Performance mode is negligible. This is not all that surprising considering that the Smart mode seems to primarily affect the target frequency for the lower-power A53 cores, dropping it from 1.5GHz to 1.3GHz in moderate workloads. This small power savings is overshadowed by the display, but its 9% impact on overall performance is easier to see. There does not seem to be much advantage to using the Smart mode, at least not for the types of workloads used by PCMark. 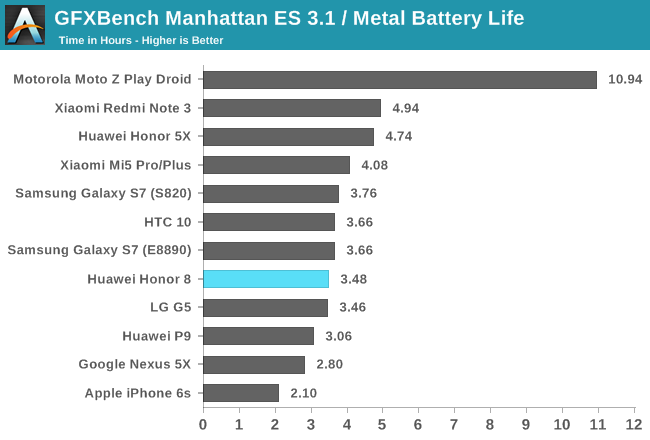 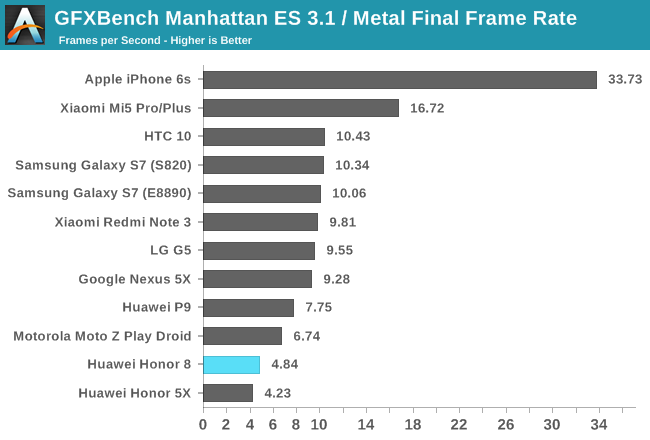 In the GFXBench Manhattan 3.1 battery life test, which predicts runtime while playing games, the Honor 8 lasts 3.5 hours, an average result that turns disappointing when you factor in performance. The LG G5, for example, lasts just as long but delivers 38% better peak onscreen performance, which extends to almost 100% by the end of the test. Granted, the G5 is a more-expensive phone, but even the Xiaomi Redmi Note 3 Pro, which is around half the Honor 8’s price, lasts 42% longer, with the help of its large battery, and while the Honor 8’s peak performance is 16% better, its sustained performance is less, with a final frame rate almost half of the Redmi’s value. 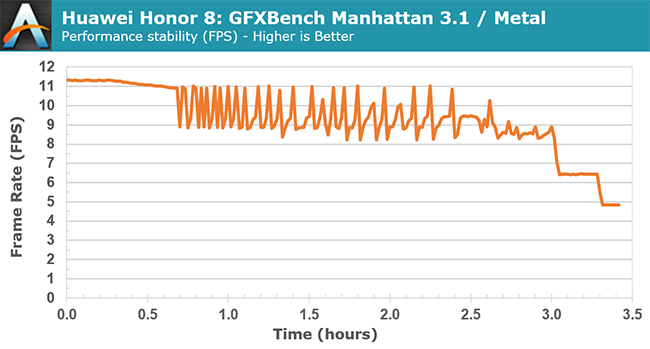 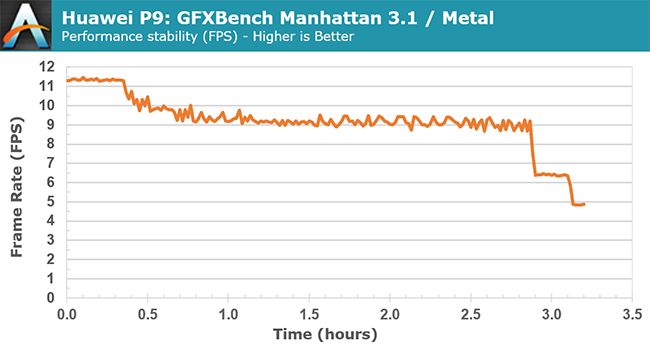 The Honor 8 is able to maintain peak gaming performance for 42 minutes in GFXBench Manhattan 3.1 before it’s forced to reduce GPU frequency to avoid overheating. Frame rate then oscillates wildly between 8-11fps until a series of forced battery saving steps kick in, which cannot be disabled. The first step occurs at the 2.4 hour mark when the battery level hits 30%, reducing frame rate to 8-9fps. The next step occurs just past the 3 hour mark when the battery level hits 10%, with the final step occurring at 3.3 hours with only 4% charge left, dropping performance to 4.8fps.

I’ve also included the P9’s performance stability graph for comparison. It starts throttling GPU frequency only 22 minutes into the test, so the Honor 8 maintains near peak performance for nearly twice as long. The P9’s performance is much more stable, however, avoiding the Honor 8’s big oscillations. It still goes through the same series of steps where it reduces GPU frequency to save battery power. The step with 30% charge remaining is not really noticeable because performance is already in the 9fps range. When the battery level hits 10% 2.9 hours in, it reduces performance to the same 6.4fps level as the Honor 8, and then down to 4.8fps with 4% charge left at the 3.1 hour mark. 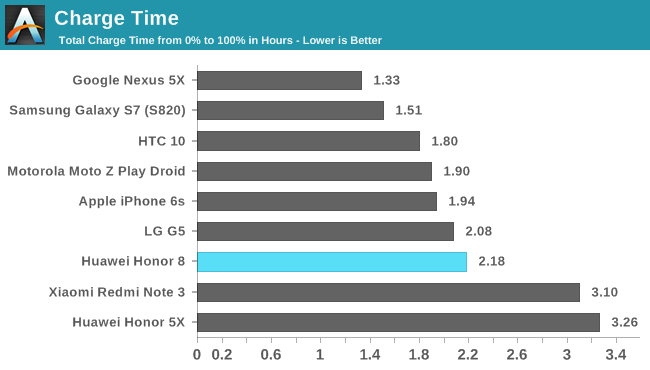 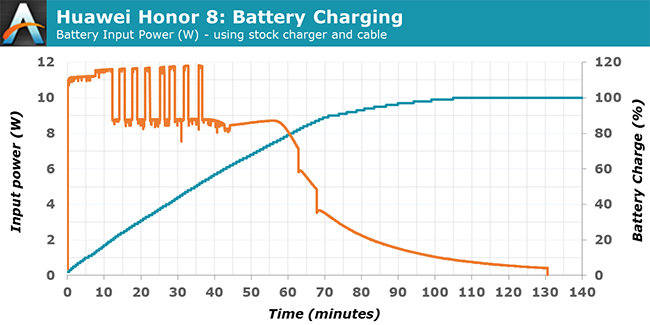 The Honor 8 includes a fast-charging system that incorporates Texas Instruments’ MaxCharge components, including the BQ25892 battery charger IC that implements battery temperature monitoring and overvoltage/overcurrent protections. The included wall charger is rated for 5V or 9V operation at 2A for a theoretical maximum of 18W at the wall and about 12W at the battery.

The Honor 8 oscillates between 8.5-12W for the first 37 minutes of charging. It then holds at a fairly constant 8.5W for another 20 minutes before tapering off quickly into a trickle charge. This charges the battery to 25% in 15 minutes and to 50% in 32 minutes. It reaches a full charge in 2.2 hours. As a side note, Huawei claims the Honor 8 reaches 47% charge in 30 minutes, which is exactly what I measured. It still does not charge as quickly as the Galaxy S7 or some other phones, but it still charges plenty fast.