The most stunning part of the GeForce FX 5800 Ultra is its utterly insane cooling system and the first thought that popped into our minds when we saw it was: noise. With the GeForce FX, NVIDIA borrowed some of their mobile technology to help minimize the amount of noise their cooling system would produce. 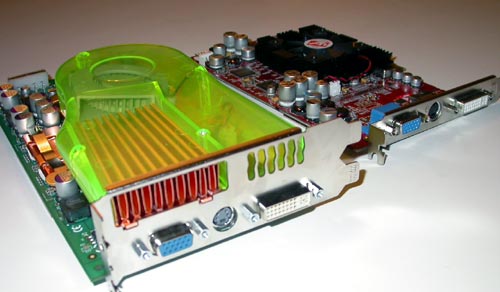 For starters, when the 3D pipeline is not in use the card will operate at lower clock speeds (300 core / 600 mem to be specific). The lower clock speeds enables NVIDIA to run the very loud fan at a much slower speed and still provide adequate cooling to the GPU and its memory. As soon as there is activity in the 3D pipeline, the clock speeds increase to their 3D setting (500/1GHz) and the fan spins quicker to deal with the increased temperatures.

To give you an idea of how loud the GeForce FX 5800 Ultra can get we've recorded two videos several inches away from a GeForce FX 5800 Ultra and a Radeon 9700 Pro for comparison purposes. The FX 5800 Ultra video starts out in 2D mode and then we start up a game, triggering an increase in clock and fan speed which you'll definitely be able to hear. Remember that these videos were made very close to the actual source of the sound, so it's much like putting your ear up to either one of these cards.

To further extend the comparison, the GeForce FX 5800 weighed in at 77 dBA on our sound meter with the fan spun all the way up vs. 64 dBA on the Radeon 9700 Pro. With the fan in its "slow" mode the card was still louder than the Radeon 9700 Pro but not nearly as bad. The rear heatsink on the GeForce FX 5800 also got quite warm, the maximum temperature of the surface reached 131F as it is still not being passively cooled. Remember that the fan setup on the GeForce FX only cools the GPU and the memories mounted on the front of the PCB, the back is cooled passively.

An interesting phenomenon we discovered while attempting to overclock the GeForce FX was that when the card got too hot (courtesy of our overclock), it automatically throttled itself down to its 2D speed (300/600MHz) and reduced the fan speed accordingly in the middle of a game. We're not exactly big fans of this method of protection, since it would make more sense to reduce the clock speed to its 3D default setting and not the significantly slower 2D clocks.

If you are curious, the card underclocked itself after running at a 540MHz core clock for a matter of minutes, and we couldn't get the memory up above 1100MHz too reliably either; as expected, there's not much headroom in the GeForce FX 5800 although that may change over the life of the chip as the manufacturing process is tuned.