SilverStone designed the ST60F-TI to be elegant and subtly stand out from a regular PSU lineup. That is the main design approach that the company takes for most of their products at this point of time. The chassis of the power supply is sprayed with a textured, grainy black paint that feels slightly rough to the touch and is highly resistant to fingermarks. This kind of paint however creates very high friction and is rather easy to scratch if the PSU body has to slide on metallic surfaces/supports. The body is 150 mm long, which actually is not abnormally short for 600 Watt units, but it did allow SilverStone to go with a 120 mm fan. The snowflake logo of the company can be seen in the form of a metallic badge over the fan’s engine. 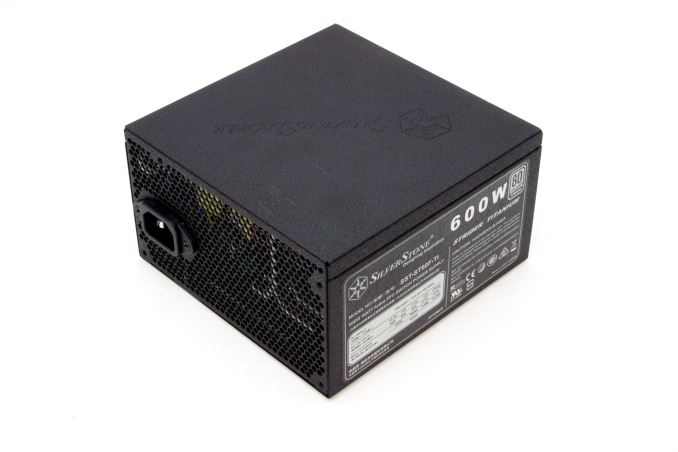 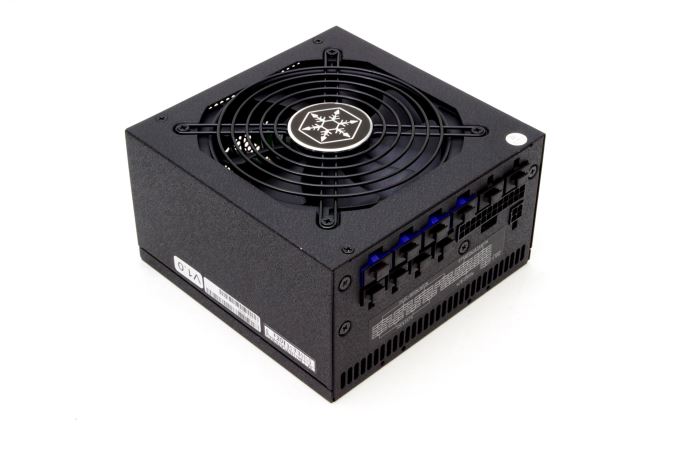 SilverStone placed the sticker with the electrical specifications and certifications of the PSU on the left side of the chassis, making it visible from a windowed side panel if the PSU is installed with its fan facing downwards. The right side of the unit is entirely plain. They also engraved their company logo on the top side, but the engraving is very subtle and most likely will not be easily visible inside a case, even if there is strong illumination. If SilverStone wanted it to stand out, it should be recessed but with a white lettering design. 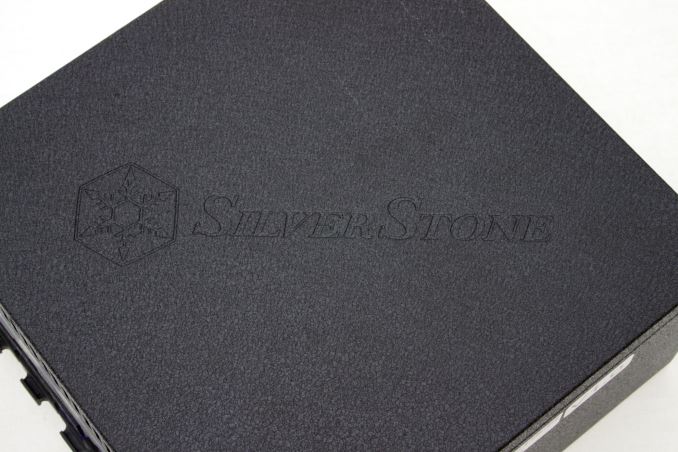 Only an AC cable receptacle can be seen at the rear side of the Strider Titanium, giving us a hint as to who the OEM behind it is. Numerous connectors for the modular cables can be found at the front side of the PSU. With the exception of the 24-pin ATX cable connectors, the rest have simple plastic caps attached. The blue connectors are for PCI Express cables and SilverStone is using them to differentiate from the similar CPU EPS connectors, which are black. The connectors are keyed, meaning that by default a user cannot really push a PCI Express cable into the EPS connector and vice versa. Finally, there are two connectors for the 24-pin cable because of the voltage sense connector found on the 24-pin ATX cable, which is supposed to improve the power quality of the PSU. 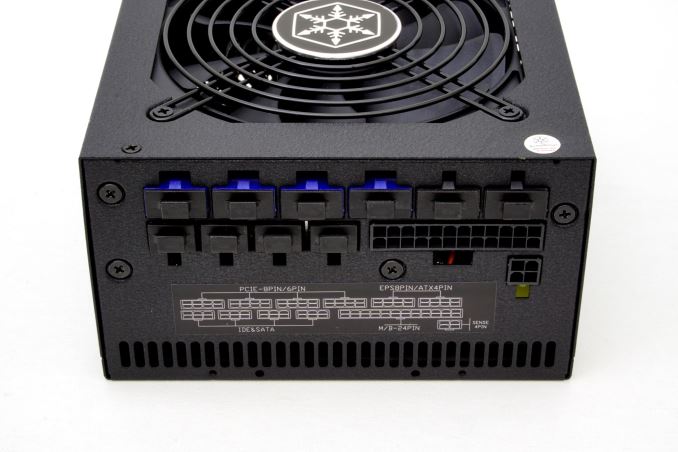 Hong Hua supplies the 120 mm fan for the cooling needs of the PSU. The 120 mm fan is a high quality model with an FDB (fluid dynamic bearing) engine and with a maximum speed of 2200 RPM. It has a wide operating range and, considering the very high efficiency of the PSU, it should remain inaudible most of the time. 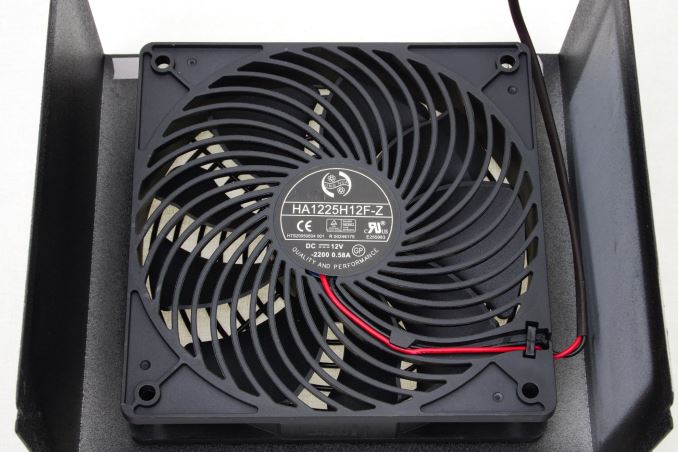 SilverStone entrusted Enhance for the creation of their new Strider Titanium PSUs. Enhance is using an upgraded version of their Platinum-approved designs that is relatively simple. Basically, the designer just went with higher quality components and removed secondary parts that would reduce the PSU’s efficiency, such as, for example, the switch. The upside is that these heatsinks are greatly oversized for a PSU this efficient and ought to aid the thermal and acoustic performance of the design. 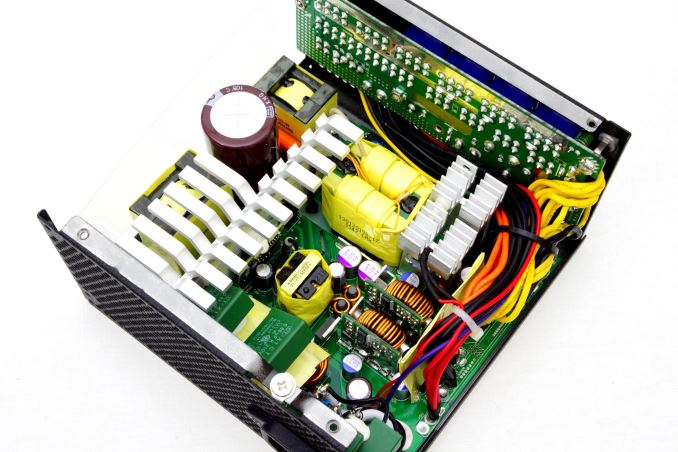 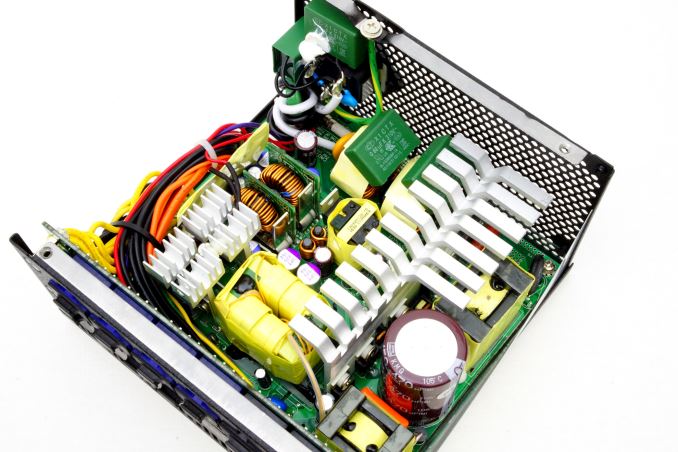 The input filtering stage consists of four Y capacitors, four X capacitors, two filtering inductors and one surge-suppressing MOV, ending to two input conversion bridges that can be seen sharing the same large heatsink with the active components of the PFC and primary inversion stages. The passive APFC components are a 450V/470μF capacitor supplied by Nippon Chemi-Con and a shielded inductor. The primary inversion stage is a half-bridge design and the main transformer has a single 12V output. 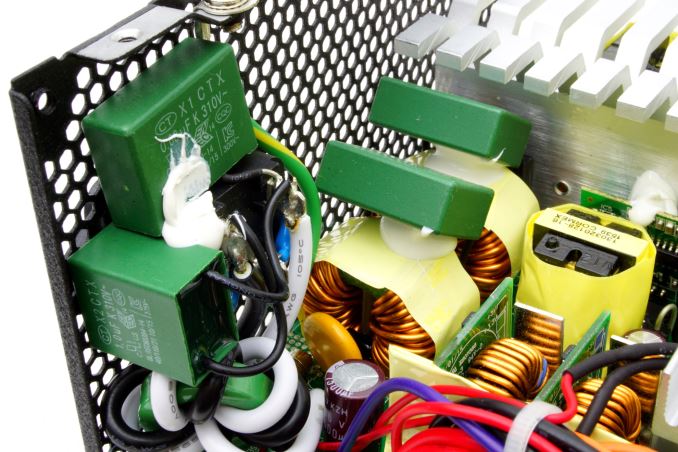 On the secondary, the DC to DC conversion circuits used to generate the minor voltage lines can be seen on their own vertical PCBs. Colored wires are being used to connect the main PCB with the connector’s PCB, which is a messy but effective solution. Nippon Chemi-Con and Rubycon supply the electrolytic capacitors on the main PCB and a few small Suncon products can be found on the connector’s PCB. Polymer capacitors are supplied by Unicon and Nippon Chemi-Con. 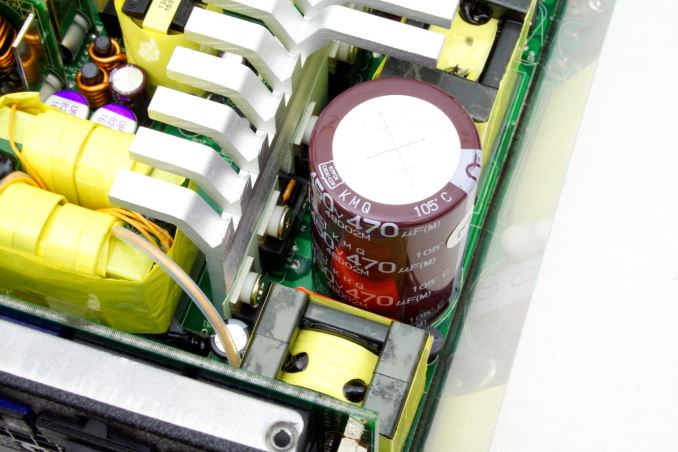 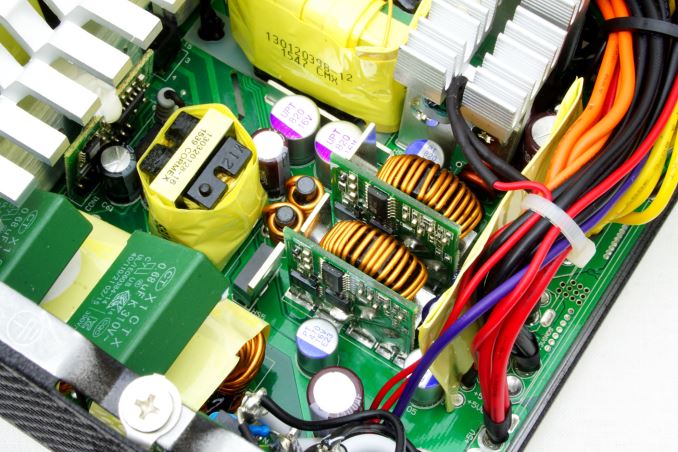