Logitech’s Gaming software is well designed, offering very good options and flexibility while being easy to use. The main screen has no practical purpose, as it merely illustrates the selected Logitech peripheral, the G910 Orion Spectrum in our case. Access to other devices and features is possible via the buttons docked in the bottom row of the user’s interface. 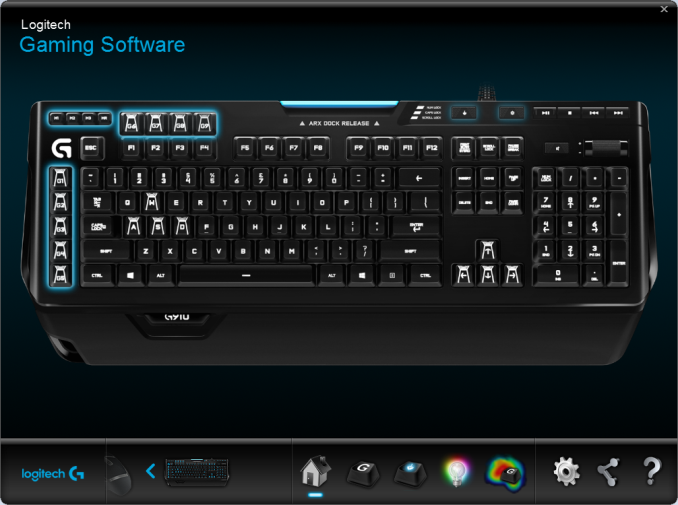 An entire screen is dedicated to the keyboard’s “Game mode” button. From this screen the user can select any keys of the keyboard that wants to have disabled once the game mode button has been pressed. 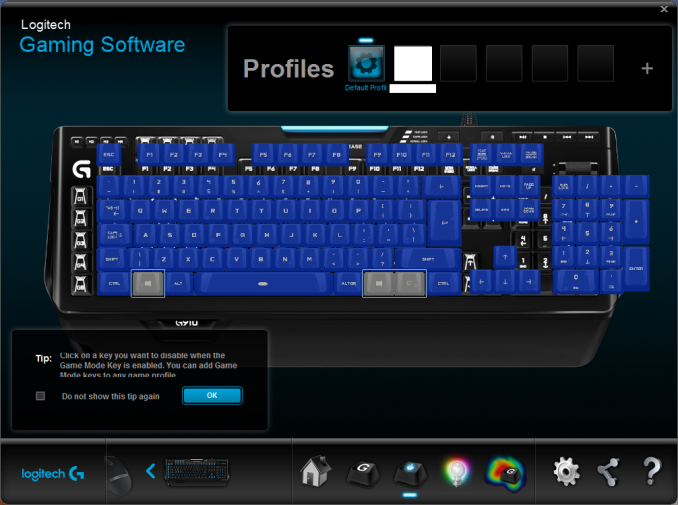 The lighting button allows the programming of the keyboard’s lighting mode and effects. The keys can be individually programmed to a specific color or keyboard-wide effects can be initiated. 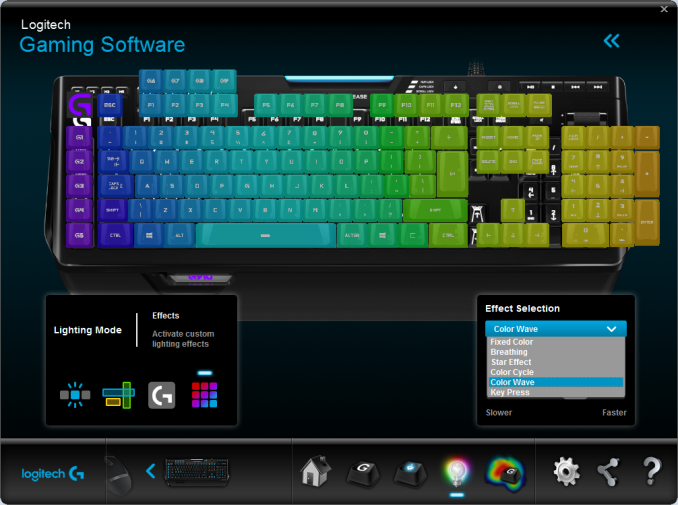 The heat map button is purely informative, allowing the user to record the number of keystrokes that the software will then present into a “heat map” that will indicate which of the keys are getting more keystrokes than others. Note that the recording has to be manually initiated, by default this option has been disabled. 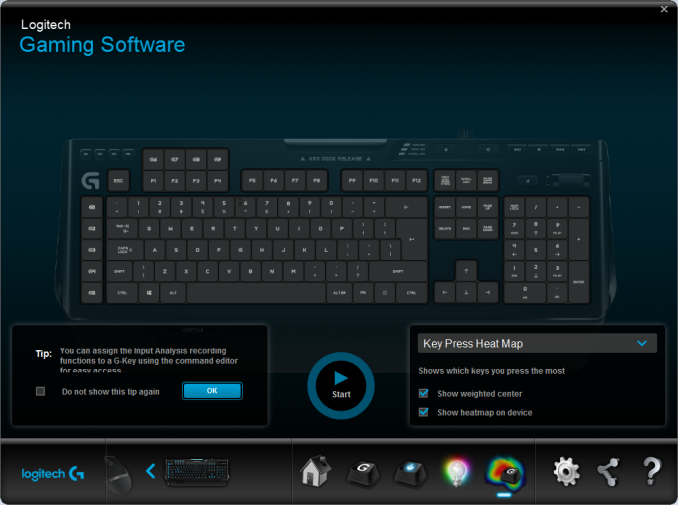 The G button leads to the most important section of the interface, the section that allows for the programming of profiles, modes and advanced commands (macros). Profiles can be linked to specific applications/games and automatically initiate once they have been launched. Sadly, only the nine extra “G” keys of the G910 Orion Spectrum can be programmed, severely reducing the versatility of the keyboard. 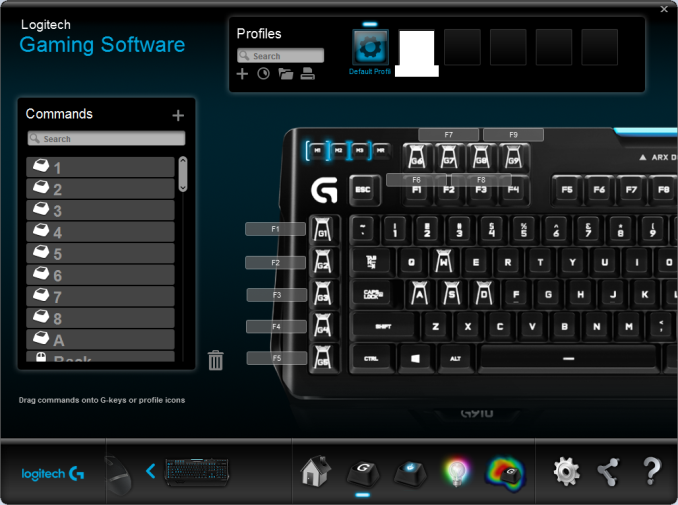 The command editor is simple, yet flexible enough. The first tab simply inserts a normal keystroke, with or without modifier keys. The sixth tab virtually offers some popular keystroke commands and we feel that it should just be merged with the first in a future version of the software. The fourth and fifth tabs are also similar, only they respectively insert single mouse key presses and media control commands instead.

The third tab inserts a string of characters, making it ideal for both short and long repetitive messages or code. It does not paste the characters into the application, it has the keyboard virtually typing it (with or without delay between the characters), so there should not be any compatibility problems.

The seventh tab allows the programmed G key to launch an external application. This could be any virtually any file, from external macros compiled with third-party software to games and applications, or even non-executable files such as a picture or a music file. The eighth tab offers some popular application shortcuts. The ninth and final tab includes the most basic functions of Ventrilo, a freeware VoIP software.

We also had a quick look at the ARX Control, the application that Logitech provides for Android and iOS devices. The software is relatively lightweight and responsive, offering informative screens and direct access to some of the keyboard’s advanced functions, but it feels that it still needs a lot of work to live up to the hype Logitech raised about it. 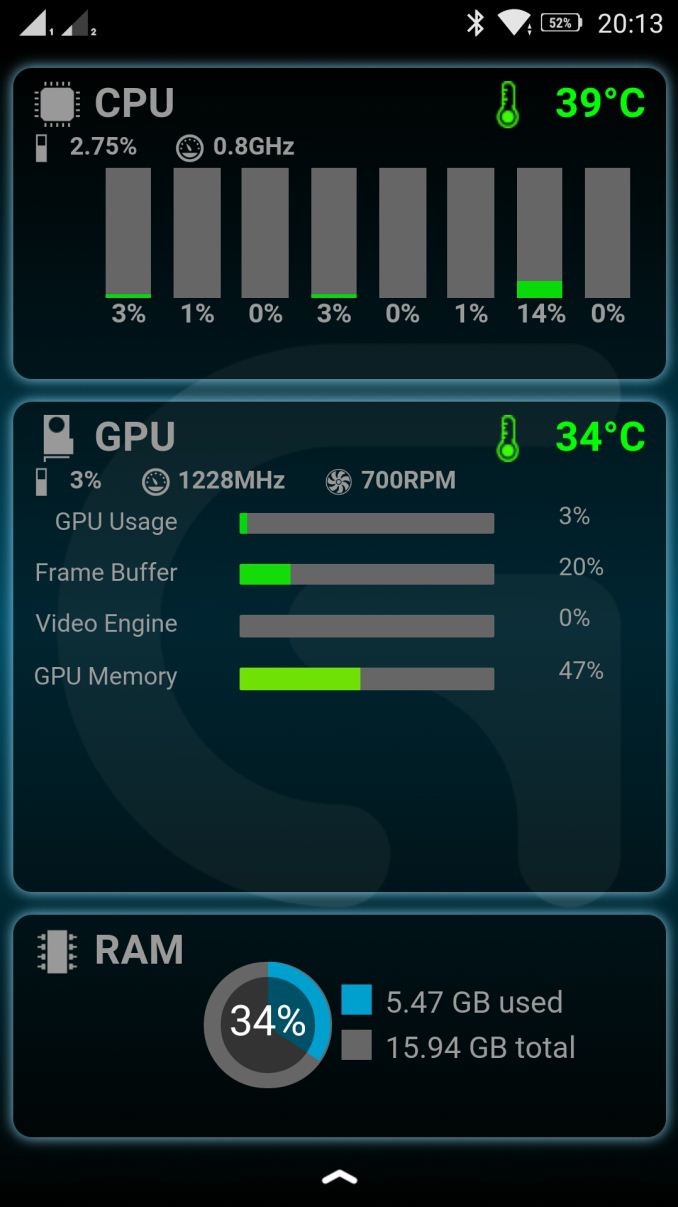 The first screen of the software is a real-time system report, indicating the overall performance of the CPU, GPU and RAM. The second screen offers direct access to manually initiate any programmed profiles (except the default profile). Assuming that there is an advanced Logitech mouse present, the third tab allows for the monitoring of its battery life and programming of its DPI settings. The fourth tab offers sound and media controls, but it did not work as intended with our device, as nearly all of the icons were extremely tiny and gathered to the left side of the screen. The corresponding buttons of the keyboard itself are just centimeters to the right of the ARX Dock anyway. Finally, the fifth tab allows for the basic programming of the G keys, but with simple or preprogrammed commands only.

The basic features of the ARX Control software do seem unimportant, but the application can actually tap into the game and act as a secondary information monitor. For example, it can display information about the car in a racing game, health/ammunition info in an FPS, or a panel for the VoIP software that is currently running. The catch is that there are very few games and applications that currently support the ARX Control software and even these available applets are, in their vast majority, unofficial packages that have been developed by individuals.