Given AMD’s focus on power efficiency with Polaris – not to mention the overall benefits of the move to 14nm FinFET – there is a lot of interest in just how the RX 480 stacks up when it comes to power, temperature, and noise. So without further ado… 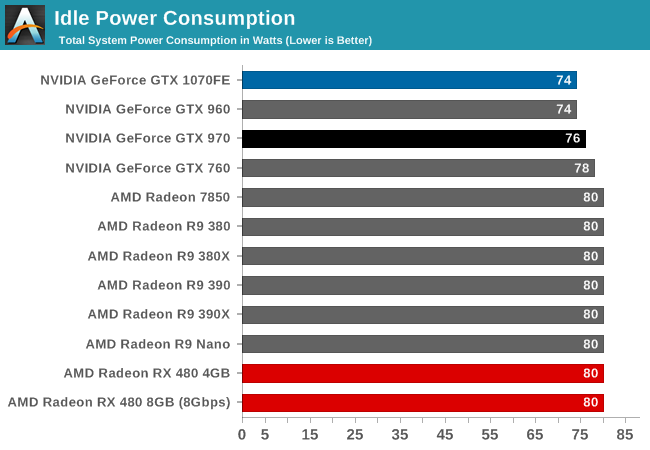 When it comes to idle power consumption I'm posting the results I've measured as-is, but I want to note that I have low confidence in these results for the AMD cards. Ever since the GPU testbed was updated from Windows 8.1 to Windows 10, AMD cards have idled 3-5W higher than they used to under Windows 8.1. I believe that this is an AMD driver bug – NVIDIA’s cards clearly have no problem – possibly related to the GPU tested being an Ivy Bridge-E system. In this case I don’t believe RX 480’s idle power consumption is any higher than GTX 960’s, but for the moment the testbed is unable to prove it. 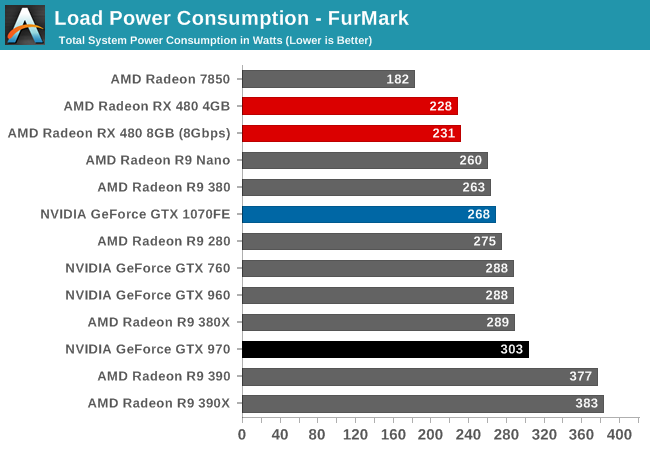 Traditionally we start with gaming load power before moving on to FurMark, but in this instance I want to flip that. As a power virus type workload, FurMark’s power requirements are greater than any game. But because it’s synthetic, it gives us a cleaner look at just GPU power consumption.

Among AMD’s cards, the RX 480 is second to only the Radeon HD 7850 in power consumption. Even then, as a GCN 1.0 card, the 7850 is one of the last AMD cards without fine-grained power states, so this isn’t a true apples-to-apples comparison. Instead a better point of reference is the GCN 1.2 based R9 Nano, which has a 175W TBP. Compared to the R9 Nano we find that the RX 480 draws about 30W less at the wall, which almost perfectly translates to the 25W difference in TBP. As a result we can see first-hand the progress AMD has made on containing power consumption with Polaris. 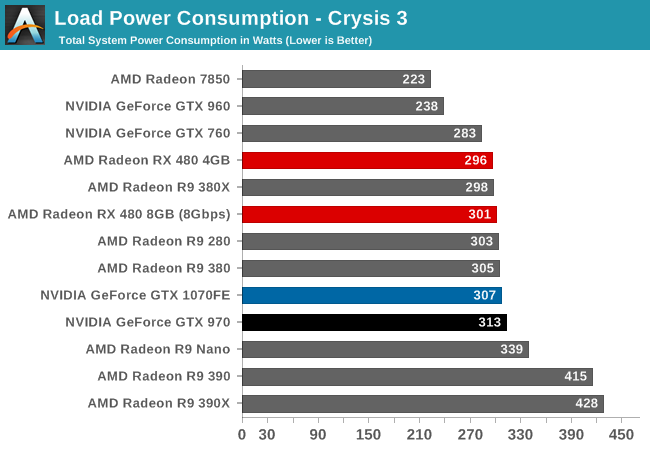 However things are a bit more mixed under Crysis 3. RX 480 is still near the top of our charts, and keeping in mind that higher performing cards draw more power on this test due to the additional CPU workload, the RX 480 compares very favorably to the rest of AMD’s lineup. System power consumption is very close to R9 280/380 for much improved performance, and against the performance-comparable R9 390, we’re looking at over 110W in savings. Hawaii was a solid chip from a performance standpoint, and Polaris 10 picks up where that left off by bringing down the power consumption to much lower levels.

The drawback for AMD here is that power consumption compared to NVIDIA still isn’t great. At the wall, RX 480 is only about 10W ahead of the performance-comparable GTX 970, a last-generation 28nm card. 1070FE further complicates matters, as its performance is well ahead of RX 480, and yet its power consumption at the wall is within several watts of AMD’s latest card. Given what we saw with FurMark I have little reason to believe that card-level power consumption is this close, but it looks like AMD is losing out elsewhere; possibly with driver-related CPU load. 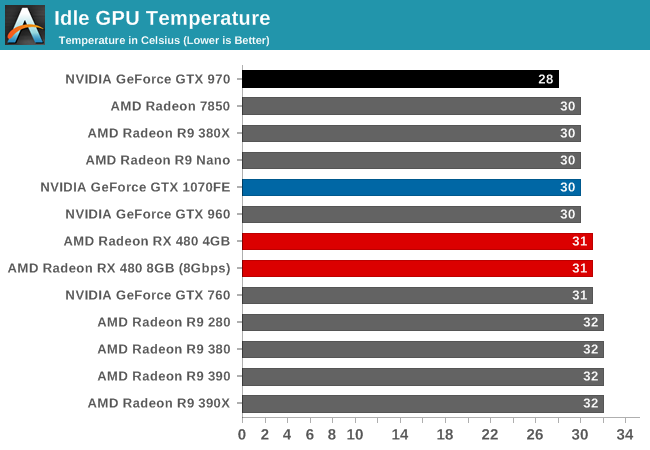 Moving on to idle GPU temperatures, there’s little to remark on. At 31C, the RX 480’s blower based design is consistent with the other cards in our lineup. 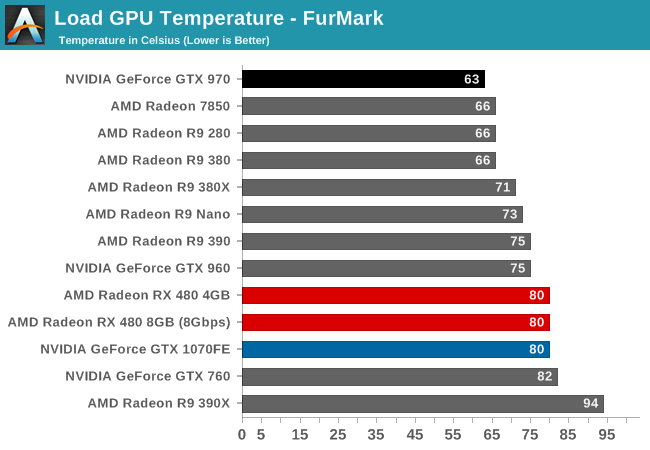 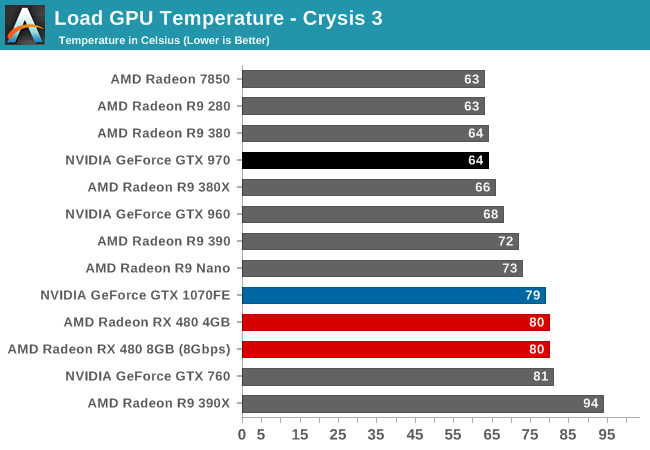 Meanwhile with load temperatures, we get to see the full impact of AMD’s new WattMan power management technology. The RX 480 has a temperature target of 80C, and it dutifully ramps up the fan to ensure it doesn’t exceed that temperature. 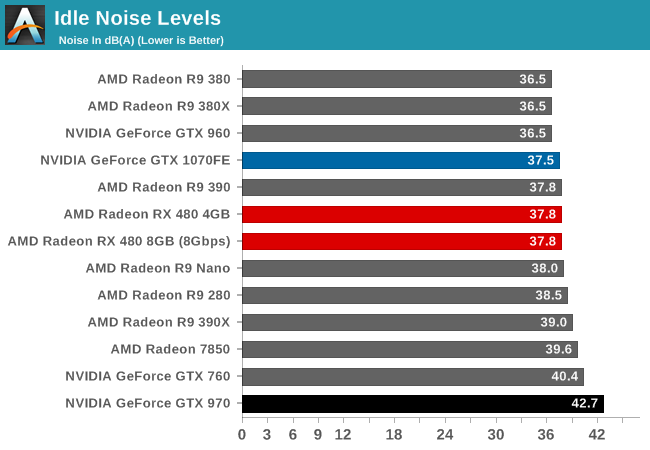 With idle noise levels RX 480 once again posts a good result. At 37.8dB, it’s in good company, only meaningfully trailing cards that idle silently due to their respective zero fan speed idle implementations. 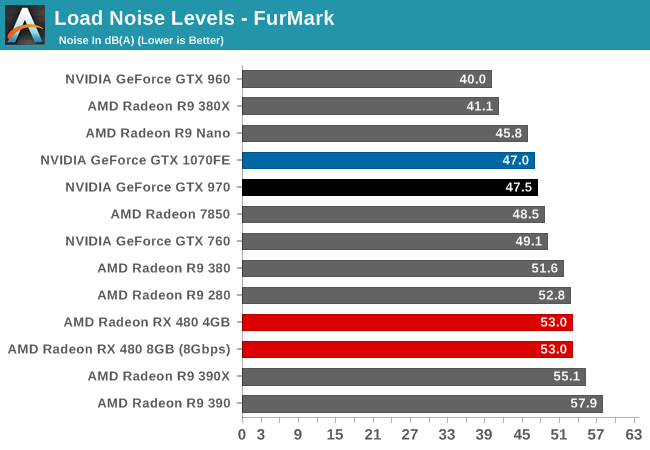 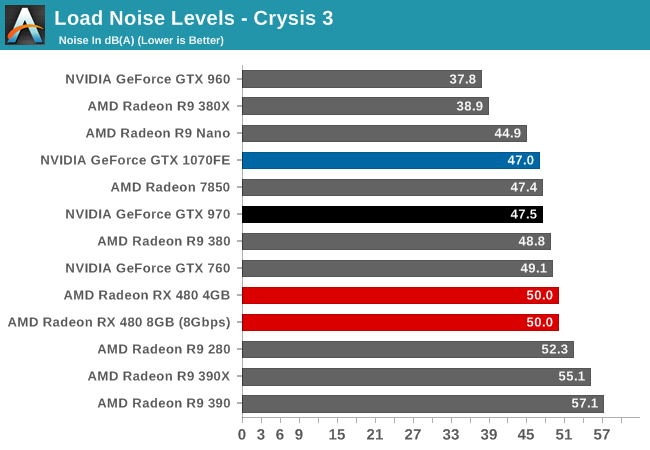 Finally, with load noise levels, RX 480 produces middling (but acceptable) results. Given that we have a mix of blowers and open air coolers here, the RX 480 performs similarly to other mainstream blower based cards. The $199 price tag means that AMD can’t implement any exotic cooling or noise reduction technologies, though strictly speaking it doesn’t need them.