One of the neatest features of Multimedia Center 8 is called MulTView. MulTView allows for up to two tuners to be installed in the system, giving one the ability to watch two channels or record one channel and watch another. The All-in-Wonder 9700 Pro works in conjunction with a PCI-based TV tuner such as the ATI TV Wonder to make this possible. Installation is fairly easy: simply plug the PCI card in and make an internal audio connection from the All-in-Wonder 9700 Pro to the sound card. Plug in the TV Wonder's sound cable into your microphone or line-in port and you are ready to go.

Two channels can be watched at the same time in separate windows. Audio preference is giving to the active window or the window that was last active. Clicking on one feed to the other switched audio instantly without hitch. 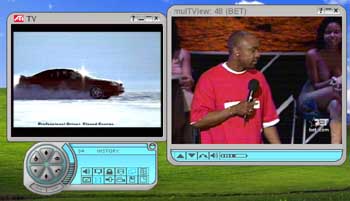 It is also possible to watch one channel in full screen mode and have a second picture-in-picture display anywhere on the screen. The included ATI remote makes things easy by having dedicated buttons for changing from one video image to the other.

The new Multimedia Center 8 also allows for applications to be skinned. The base install comes with a few different skins and ATI hopes that more skins will be come available as the product catches on.

Another interesting feature is the ability to search closed caption text and have the video go to the appropriate section of the captured stream. The feature did work as advertised and proved useful for finding touchdowns in time shifted video.

The final major addition to Multimedia Center 8 is an improved Library program that keeps track of all your media files in one easy place and even suggests files that can be deleted.

Also added to Multimedia Center 8 is the ability to display two DVD subtitles at once (for different languages) and the addition of alpha blending throughout the entire suite.

We mentioned in our preview that ATI has switched from bundling Ulead Video Studio with the All-in-Wonder 9700 Pro to including a special version of Pinnacle Studio 8. We got a chance to play around with Studio 8 and must say that we were very impressed. Overall the functionally provided by the program was greater than that of the often confusing Ulead software package and offers extra features such as the ability to detect scene changes in recorded video (making transitions and editing much easier). The software also includes built-in DVD burning capability which is as simple to use as hitting "make DVD".

Also included in the software package is Matchware Mediator 7 for producing web-based content and Morrowind - The Elder Scrolls III for having a bit of fun.