It was teased earlier in the review, but it makes sense at this stage to talk about power consumption.

With a system as complex as a modern APU or SoC, the initial plans for this review involved getting a development system with the right shunts and hooks to measure the core and graphics power separately in a thermally unconstrained environment for both Kaveri and Carrizo, but unfortunately the parts didn’t come together at the time they were needed. Instead we had access to a Watts Up PRO, a power outlet based monitor with some recording capabilities. While the hardware was not ideal for what we wanted to test, it provided a large chunk of interesting data.

We did a number of tests with data monitoring enabled on both the HP Elitebooks. When AMD released Carrizo, a lot of fuss was made about video playback for several reasons. Firstly, Carrizo implements an adjusted playback pathway for data so instead of moving data from the decoder to the GPU to the display controller, it moves data directly from decoder to display, saving power in the process. 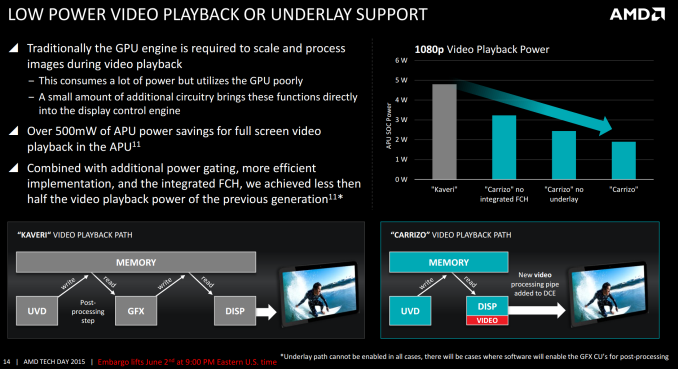 AMD also listed the video playback power of Carrizo (as compared to Kaveri) as significantly reduced. In the example above in the top right, the Kaveri APU is consuming nearly 5W, whereas Carrizo will consume only 1.9W for 1080p content. 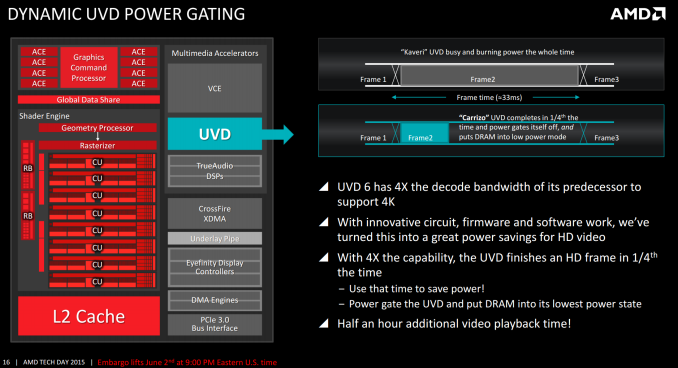 The other video playback optimization in Carrizo is the Unified Video Decoder. The bandwidth and capability of the UVD is increased four-fold, allowing the system to ‘sleep’ between completed frames, saving power.

For the first test, we took a 1920x1080 resolution h264 video at 30 FPS (specifically Big Buck Bunny) and recorded the power consumption for playback. 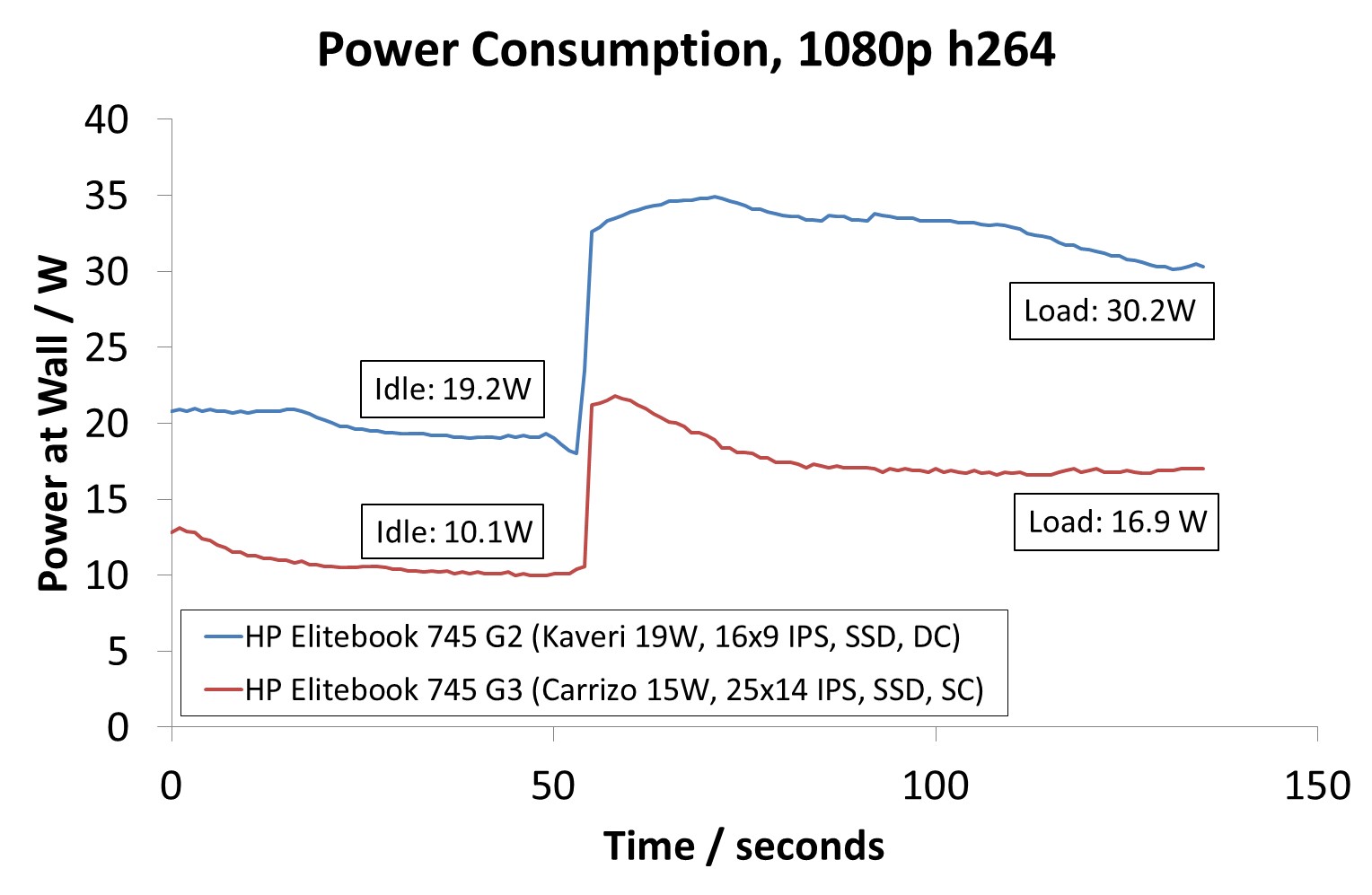 The difference here is striking. The Carrizo system in this instance has sustained power consumption lower than that of the Kaveri system. Overall the Kaveri system draws 11W over idle to play back our test video while the Carrizo system only draws 6.8W over idle for the same task. Put another way, the load power cost at the wall for  watching 1080p video is about 4W lower on Carrizo as compared to Kaveri, which is close to what AMD claimed in the first slide above (and note we’re measuring at the wall, so chances are there are other chipset optimizations being done under the hood).

The same video but in 4K format was also tested on both systems. It is at this point I should say that the Kaveri system was unable to play the 4K video properly (Kaveri doesn't officially support 4K decoding to begin with), and would only show about 20% of the frames. Audio was also affected. 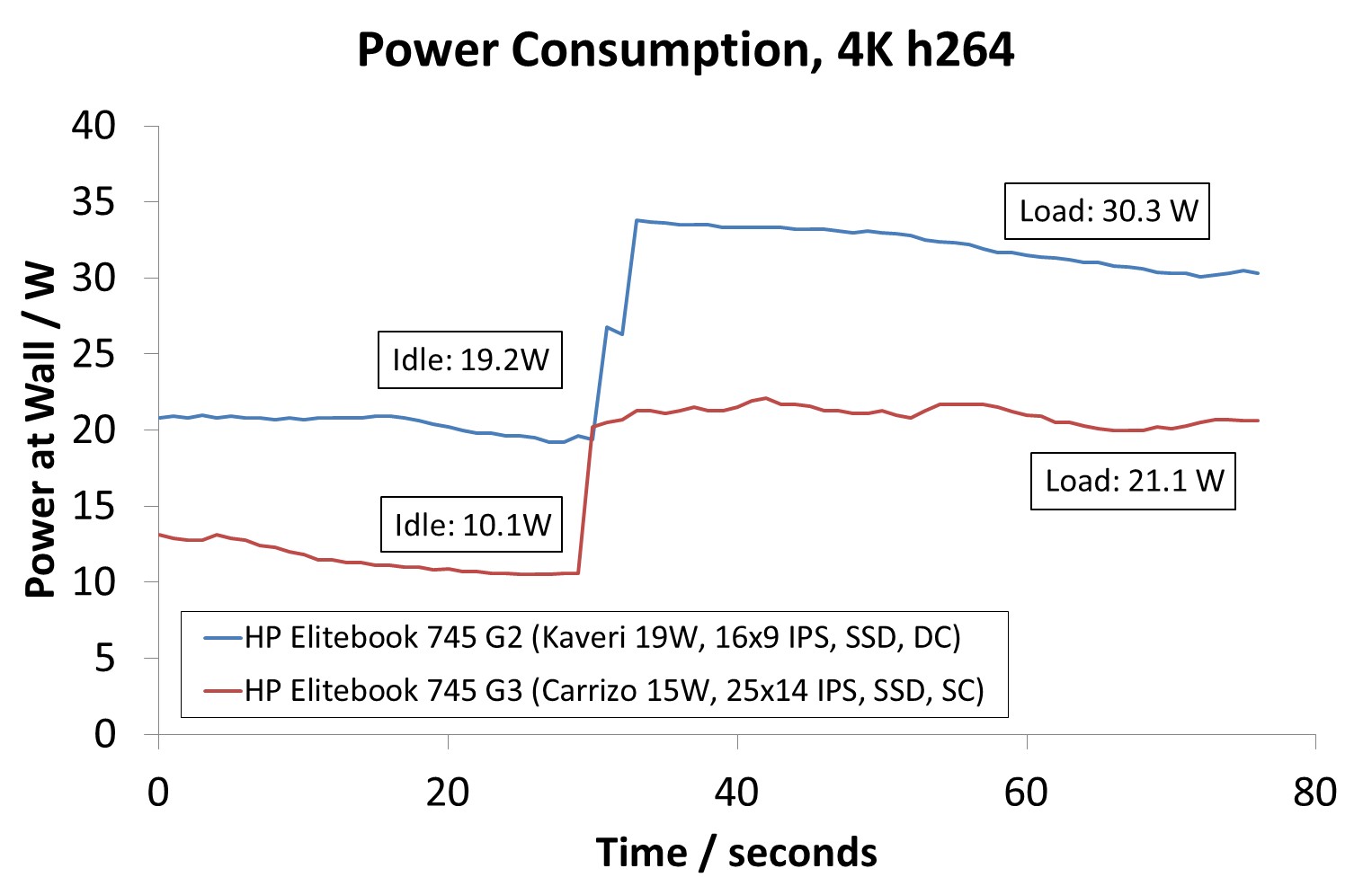 In this case power consumption is above that of the 1080p video, and both systems require around 11 watts from idle to sustained performance. The added benefit with Carrizo though is that you can actually watch the video.

We also ran power tests on a set of our regular benchmarks to see the results.

In our 3DPM test, we typically script up a batch of six runs and take the average score. For this we did it to the single thread and multithreaded environments. 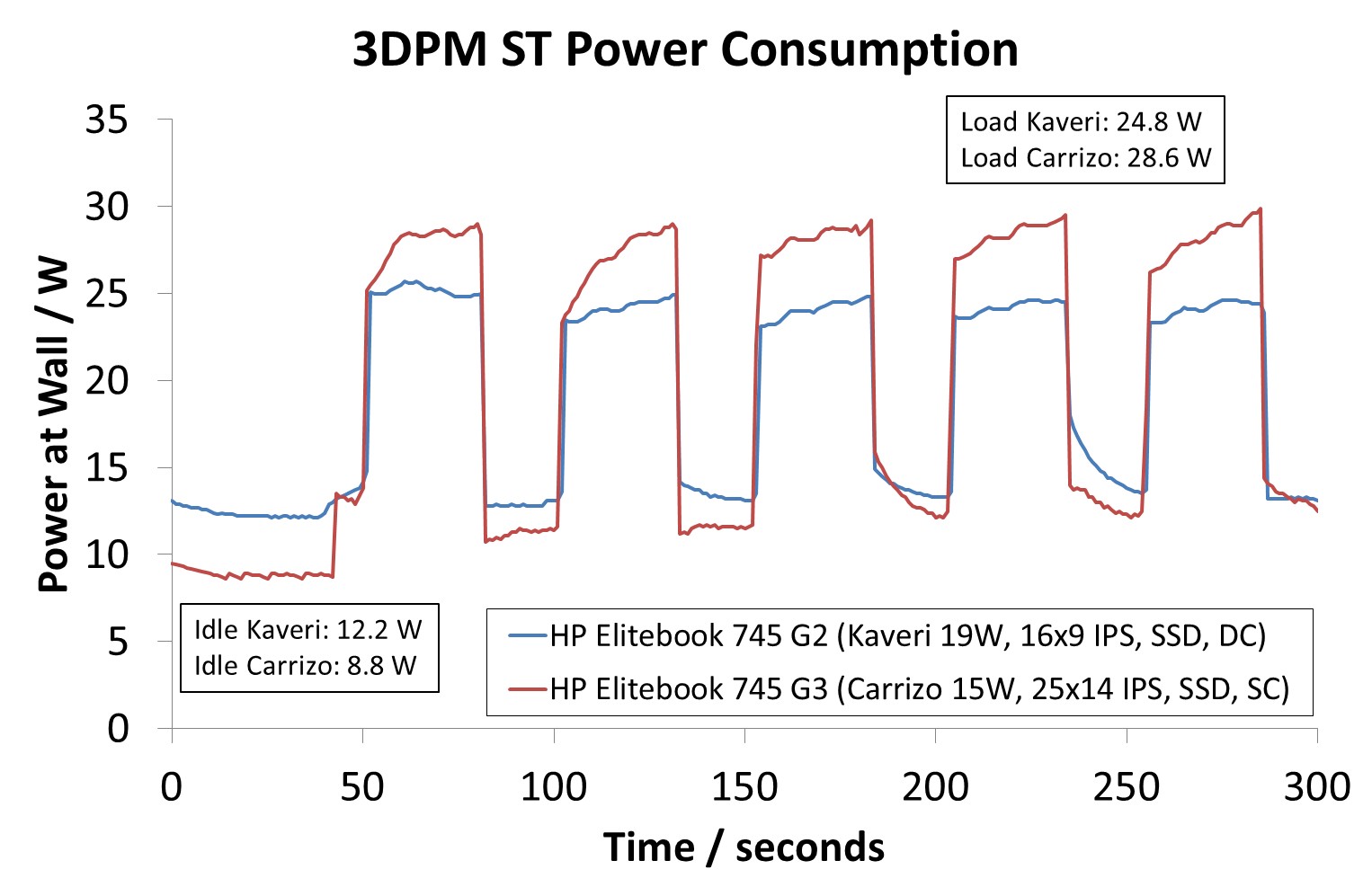 In single threaded mode, two interesting things occurred. First, as we expected, the Carrizo system can idle lower than the Kaveri. Second is that the Carrizo system actually goes into a higher power state at load by almost 4W. This means that the delta (Load to Idle) is 8W higher for Carrizo than Kaveri.

It is easy to take away from this that Carrizo, as an APU, uses more power. But that is not what is happening. Carrizo, unlike Kaveri, integrates the chipset onto the same die as the APU (better integration, saves power), but it also means that it is essentially shut off at idle. Part of Carrizo’s optimizations is power management, so the ability to shut something down and fire it back up again gives a larger low-to-high delta automatically. Essentially, more things are turning on. The fact that the Carrizo power numbers are higher than Kaveri during the benchmark is correlated by the performance, despite Kaveri having the higher TDP. 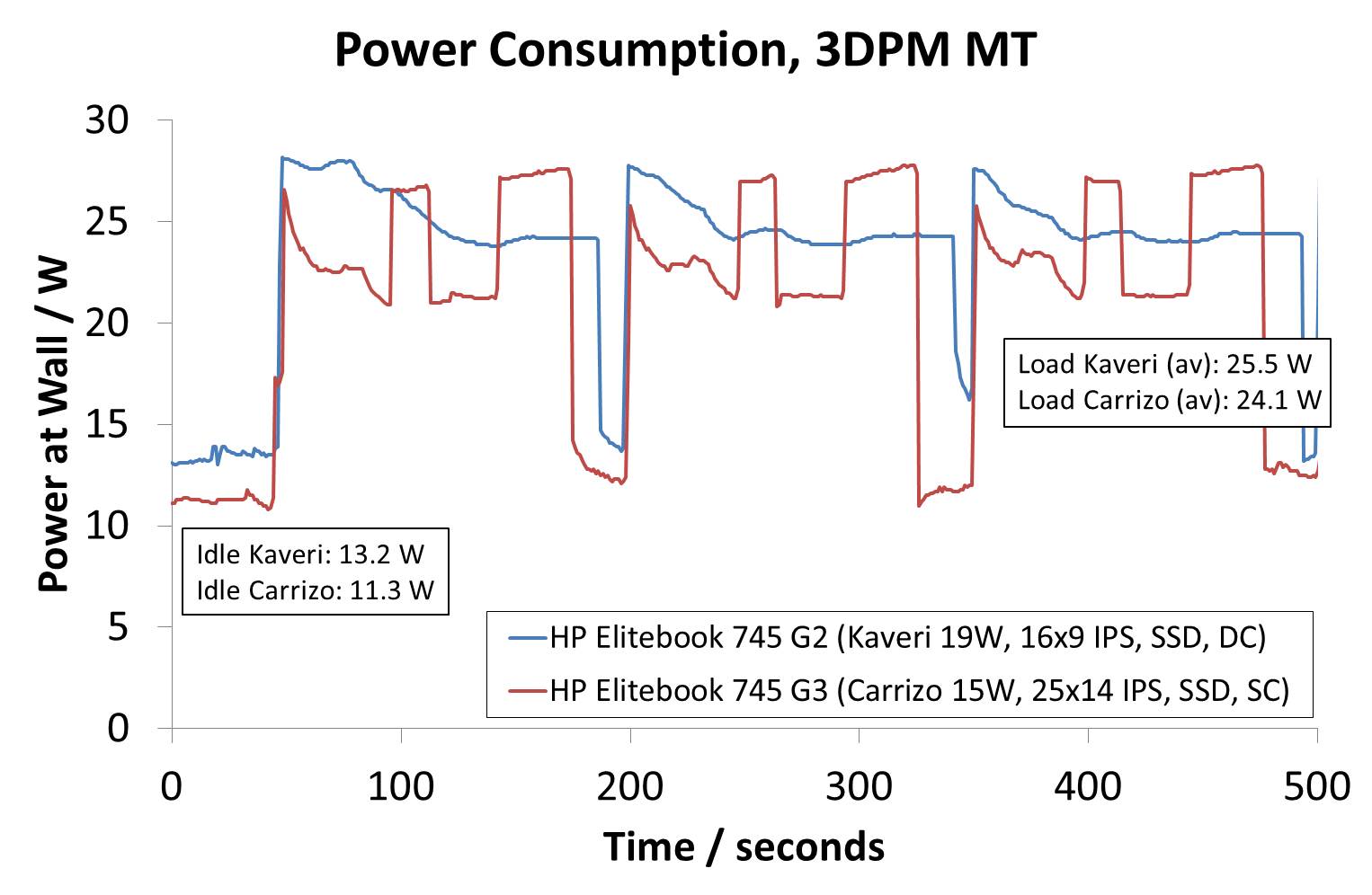 For the multithreaded test, both systems settle to similar power consumptions as the single threaded test, although the Carrizo system has a much more varied power profile, which also finishes the benchmark earlier than the Kaveri.

For the web tests, we expect them to be partially threaded but because they probe a number of real-world and synthetic tests, there should be some power variation. 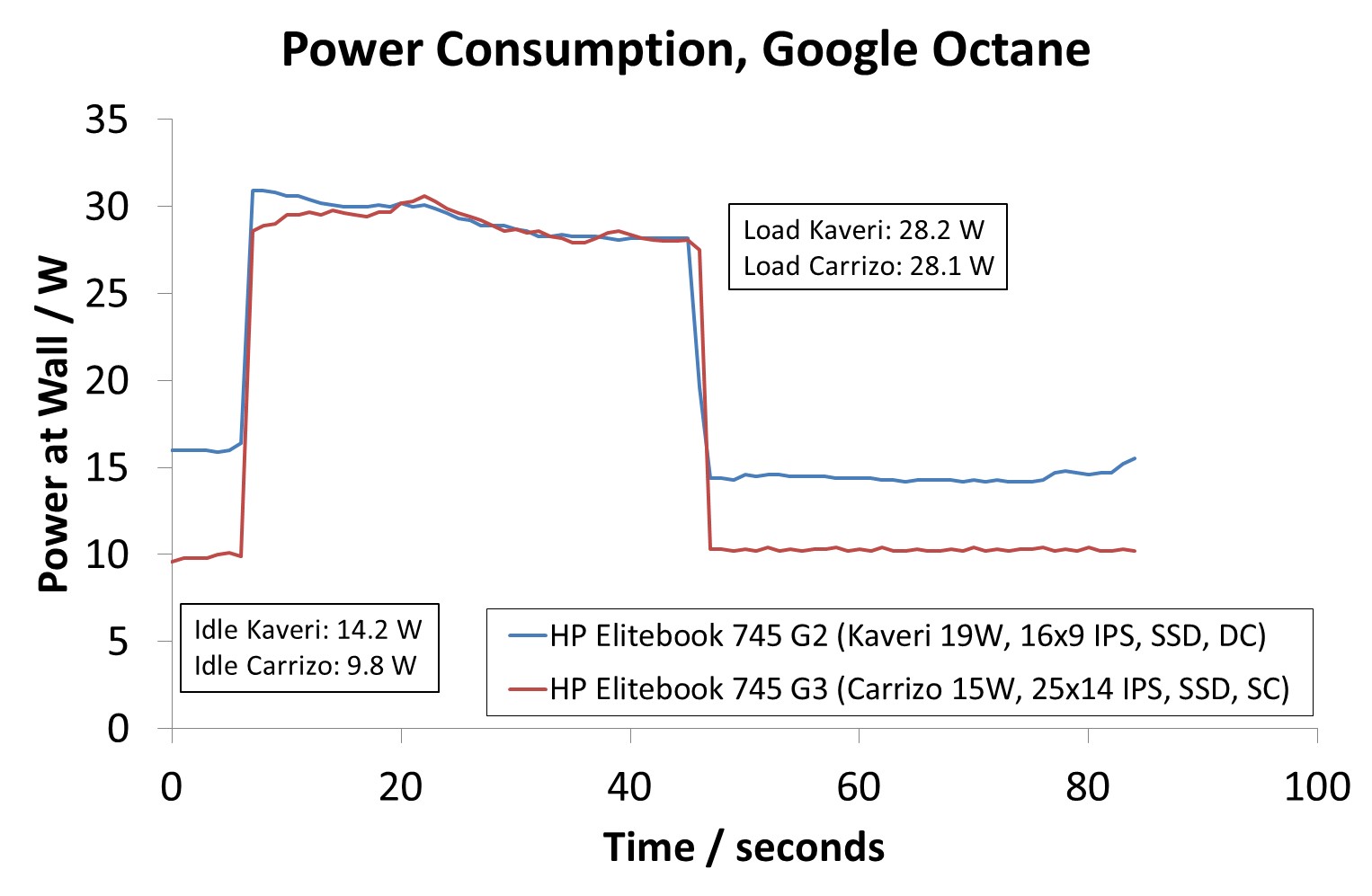 Octane is actually relatively flat, instigating similar power profiles to both. Again, it looks like that Carrizo expends more energy to do the same amount of work, however it is easy to forget that the Carrizo idle power state is lower due to optimizations. 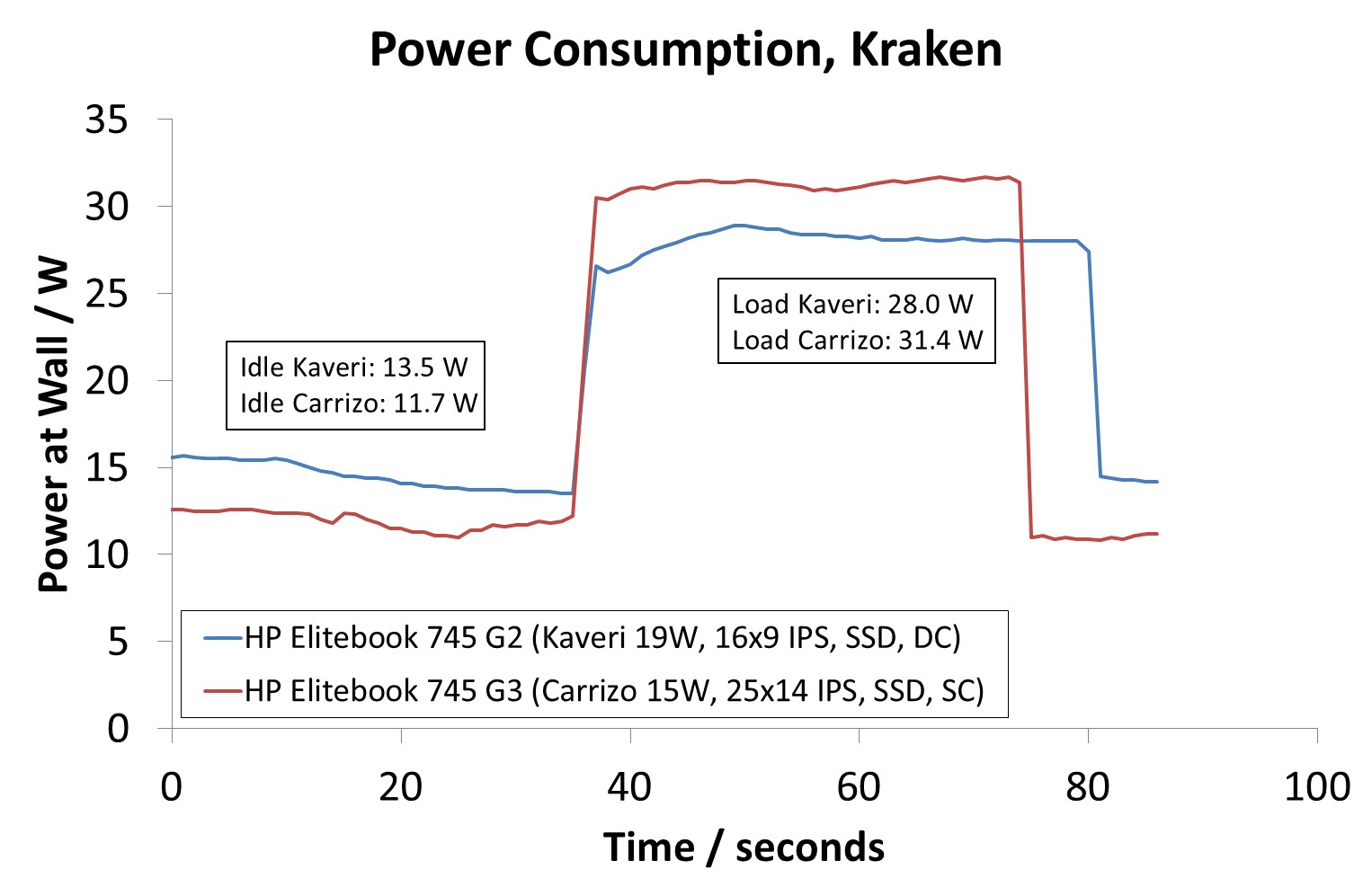 With Kraken we also get a flat profile, although one could argue that we’re seeing a classic case of running quick and finishing the benchmark sooner vs. a more sedate path.

This graph was shown earlier in the review, but let’s look at it again, as it is a good example of a bursty workload: 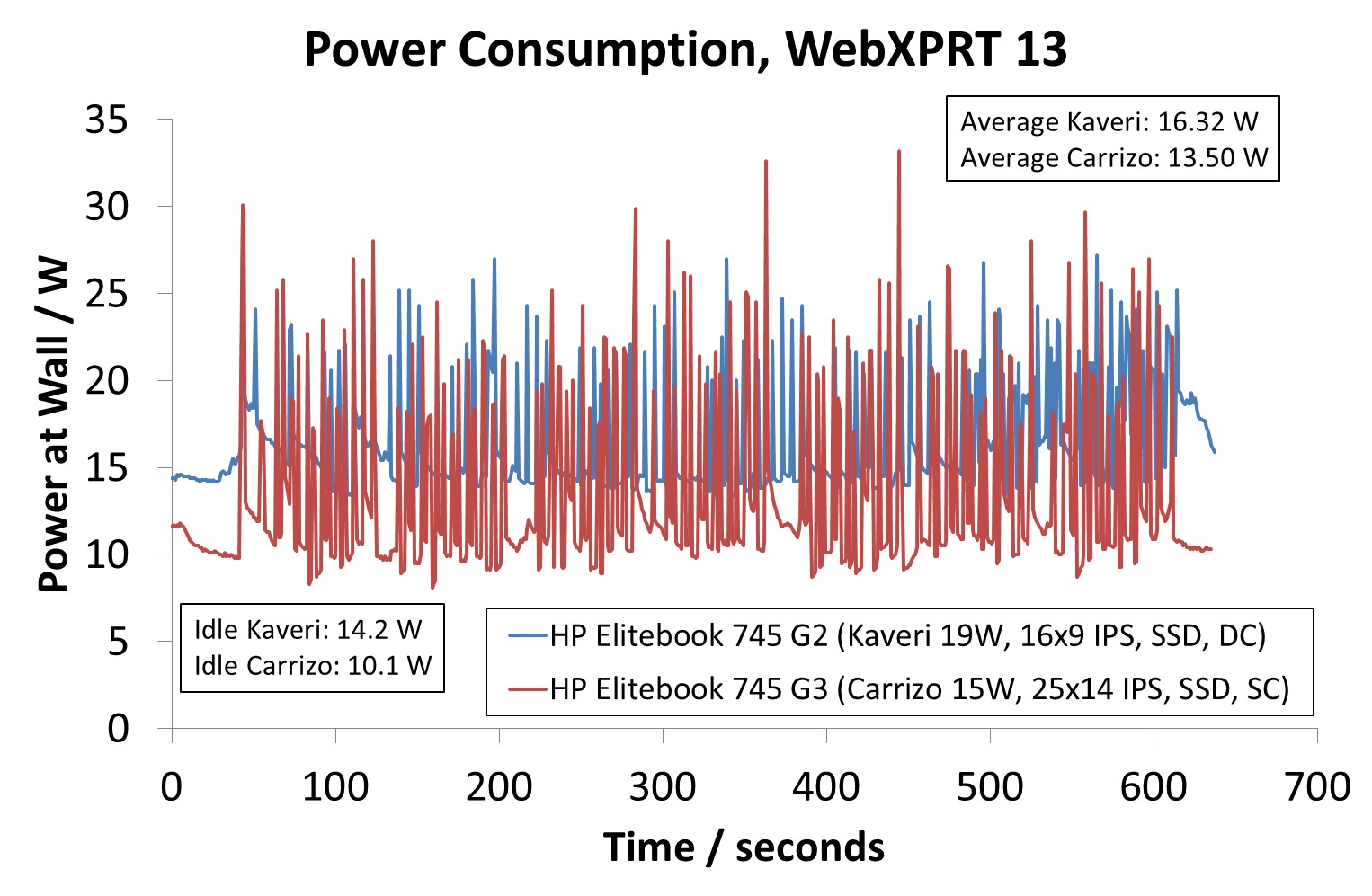 With average power numbers only a few watts above the idle numbers, both systems do a good job on overall power though again it is easy to think that the larger delta of the Carrizo numbers means that the APU is consuming more power. This is where if you try and calculate the actual energy consumed for each system, you get stupid numbers: 1208.7 joules for the Kaveri and 1932.8 joules for the Carrizo. Without starting from the same platform (or without taking numbers direct from the cores), there are obviously other things at play (such as Carrizo’s capability to control more power planes).

Our final power test is WinRAR, which is characterized as a variable threaded load involving lots of little compressible web files and a handful of uncompressible videos. 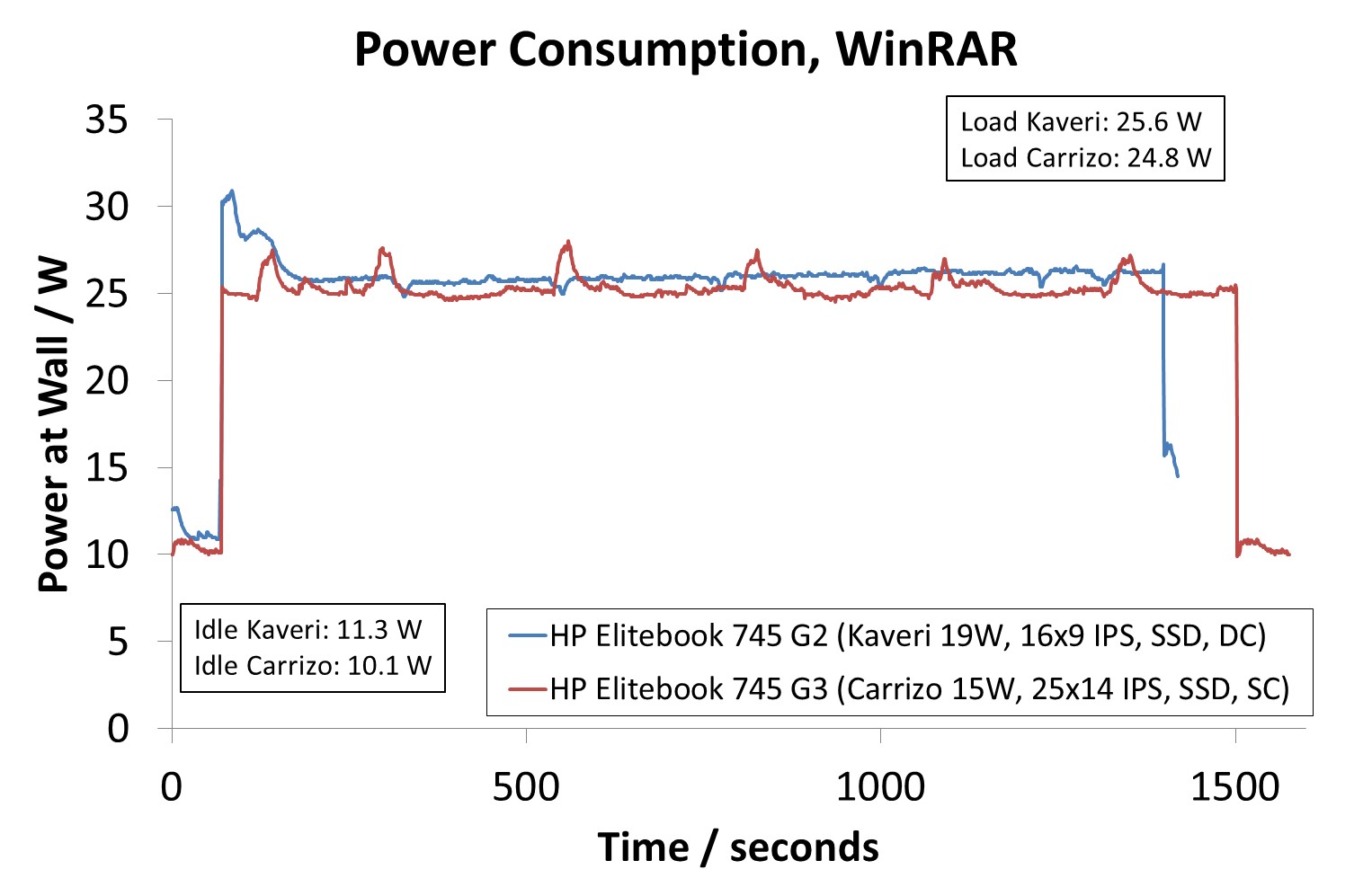 In this instance I was surprised to see both systems perform similarly. The HP Elitebook G2 actually has the upper hand here, as it is equipped with dual channel memory. WinRAR is a very memory bandwidth affected benchmark, so the G2 has an upper hand in performance but will also balance between drawing more power for two modules or running in a more efficient mode if there is sufficient data at the CPU.