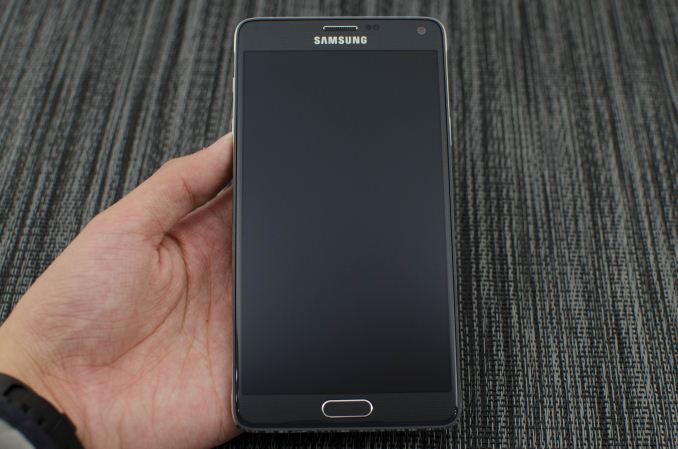 At this point, the Galaxy Note line needs little introduction. After all, the Galaxy Note is Samsung’s biggest success in mobile. While Apple redefined the smartphone and tablet segment, Samsung defined the phablet segment. Despite widespread skepticism, the original Galaxy Note was a massive success. Combined with the Galaxy S2, 2011 was a watershed year for Samsung as they leapfrogged other Android OEMs. Since then, we’ve seen continuous improvement from year to year with each Galaxy Note. While there were competitors, Samsung managed to hold on to their first-mover advantage for multiple generations. However, with the release of Apple’s iPhone 6 Plus we see one of the first significant threats to Samsung’s dominance of this segment.

The Galaxy Note 4 is Samsung’s latest iteration of the Galaxy Note phablet, and on the surface Samsung has put their best foot forward. With the highest bin of Qualcomm’s Snapdragon 805 or Exynos 5433, the latest generation AMOLED display, a 16MP camera with OIS, and a new design, the Galaxy Note 4 encompasses some of the best hardware that Samsung can deliver. I won’t spend too much time here, but the spec sheet below should cover most of the key points.

While all of these things are easily discovered, the most immediate impressions always come from the design of the phone. In this respect, Samsung has done a surprisingly good job. On the front of the phone, we see a relatively standard design for Samsung. This entails a pattern on underneath the glass, which appears to be a bit shimmery in nature, along with dark black pinstripes. This causes a noticeable pattern in the capacitive buttons when lit, as with the LED notification light. There’s the standard earpiece and Samsung logo on top of the display, and a home button on the bottom, which serves as a fingerprint scanner as well. This home button is noticeably clicky in nature, and feels much better than the Galaxy Note 3’s home button. 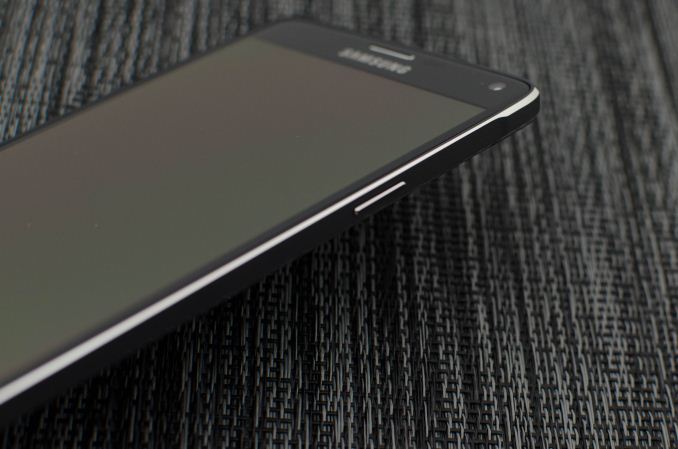 On the sides, we see a similar level of improvement. The volume rocker, which is on the left side, and power button, which is on the right side, feel fantastic in comparison to most phones, and is quite close to the iPhone 6 and 6 Plus in feel. Unlike most Galaxy smartphones, we see an aluminum frame that runs all along the side of the phone, which also has a chamfered edge to eliminate sharp edges. In this area, Samsung has made serious strides as the frame really helps to make for a better in-hand feel that far exceeds what we saw with the Galaxy Note 3 or even the Galaxy S5. Along the top of the frame are cutouts for the 3.5mm headphone jack and IR port which enables TV remote functionality. Along the bottom of the frame, we see the microUSB 2.0 port. While this is technically a regression from the microUSB 3.0 port in speed and power delivery, I suspect compatibility issues and the ungainly design of the microUSB 3.0 standard justified a move back, at least until USB Type-C is ready for shipping devices. 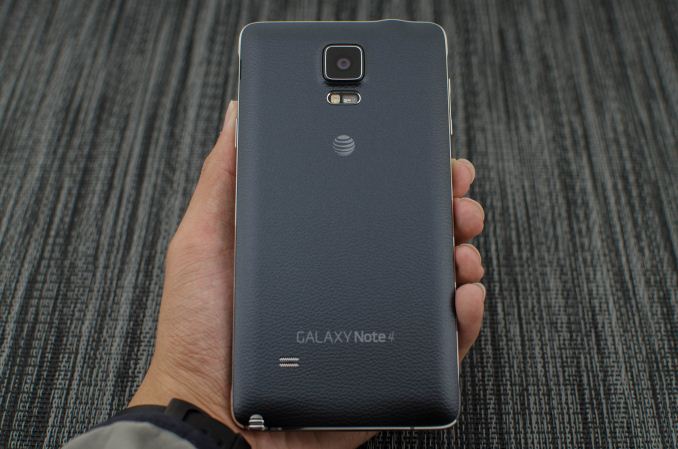 On the back of the phone, we see some more changes. Instead of the downward-firing speakers of the Galaxy Note 3, we see that the speaker has been moved to the back of the phone. The design of the back cover is more an evolution of the Note 3’s back cover than the Galaxy S5’s, which has a noticeable faux leather pattern although the feel is closer to soft touch plastic. There’s also no stitching to try and make it seem more like leather. Instead, at the edges it seems to meet with the metal frame. A similar level of fit and finish is seen around the LED flash module, which is now flush with the back cover instead of sunk into the phone as with the Galaxy S5.

Overall, the design of the Galaxy Note 4 is massively improved. While it isn’t quite as amazing as the rounded design of the iPhone 6 and 6 Plus, it’s one of the best designs I’ve seen for a phone with a removable back cover. The only complaint I have is that Samsung should use a flat black pattern under the glass to accentuate the high contrast of the AMOLED display, but this is quite minor in nature.