by Ganesh T S on January 7, 2014 8:00 PM EST
98 Comments | Add A Comment
98 Comments + Add A
Comment
Gigabyte is targeting the BRIX Pro towards professional consumers with compute-intensive workloads. For general office use (including web browsing and light word processing work), systems such as the Core i5-based NUC we reviewed last week are more than enough. In order to bring out scenarios where the extra grunt provided by the Pro unit becomes necessary, we are presenting some real world benchmarks below. These are tasks carried out by workers where time in money, and the premium paid upfront for the better configuration is trivial compared to the time saved.
WinRAR Benchmark
We present two benchmarks using WinRAR. The first one involves decompressing a 4.36 GB split archive and recording the time taken to complete the process. This is a test of the CPU power as well as the storage subsystem. 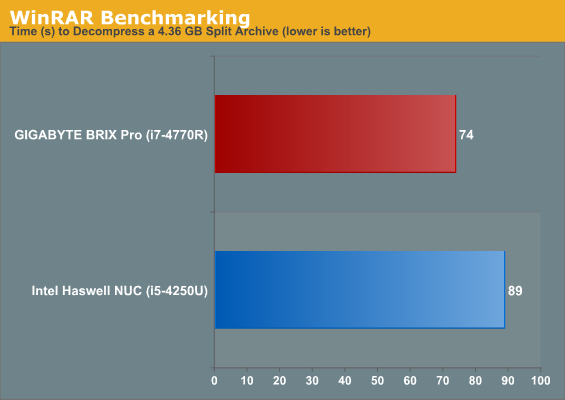 The graph below presents the internal WinRAR benchmark numbers. In this benchmark, the program takes compresses / decompresses random data in the RAM. This is a test of the CPU power as well as the DRAM capabilities. 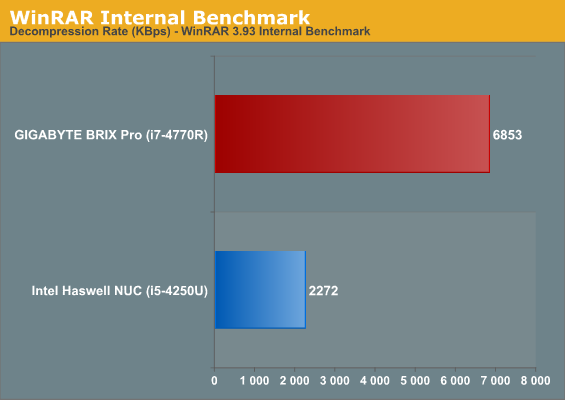 TrueCrypt Benchmark
As businesses (and even home consumers) become more security conscious, the importance of encryption can't be overstated. CPUs supporting the AES-NI instruction for accelerating the encryption and decryption processes have, till now, been the higher end SKUs. However, with Bay Trail, even the lowly Atom series has gained support for AES-NI. Both the i5-4250U and the i7-4770R have AES-NI instructions support. The TrueCrypt internal benchmark provides some interesting cryptography-related numbers to ponder. In the graph below, we can get an idea of how fast a TrueCrypt volume would behave in the two different systems. 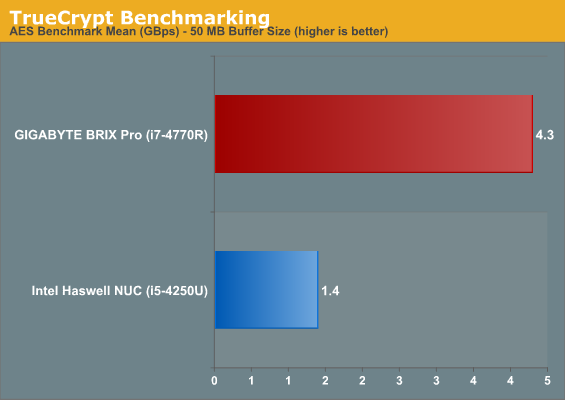 Agisoft PhotoScan
Agisoft PhotoScan is a commercial program that converts 2D images into 3D point maps, meshes and textures. The program designers sent us a command line version in order to evaluate the efficiency of various systems that go under our review scanner. The command line version has two benchmark modes, one using the CPU and the other using both the CPU and GPU (via OpenCL). The benchmark takes around 50 photographs and does four stages of computation:
Stage 1: Align Photographs
Stage 2: Build Point Cloud (capable of OpenCL acceleration)
Stage 3: Build Mesh
Stage 4: Build Textures
We record the time taken for each stage. Since various elements of the software are single threaded, others multithreaded, and some use GPUs, it is interesting to record the effects of CPU generations, speeds, number of cores, DRAM parameters and the GPU using this software. 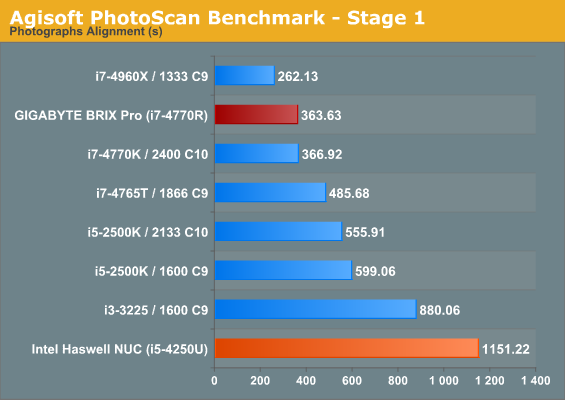 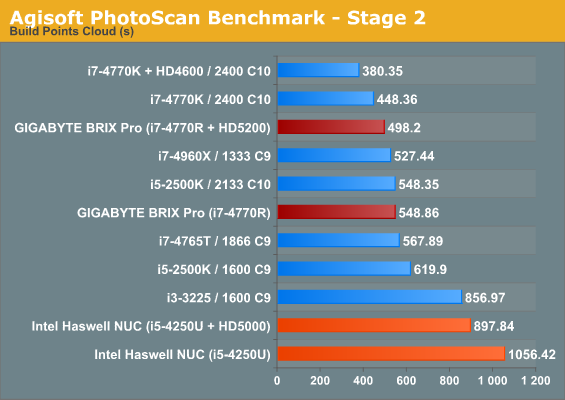 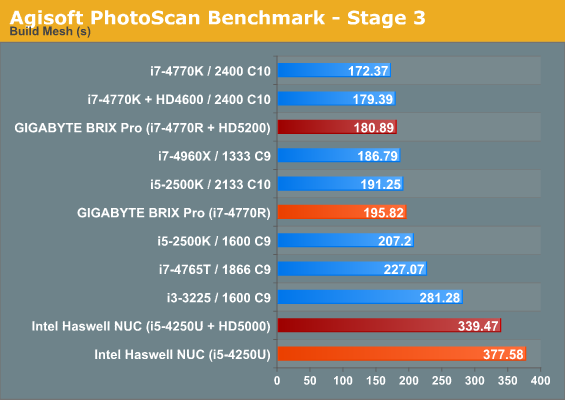 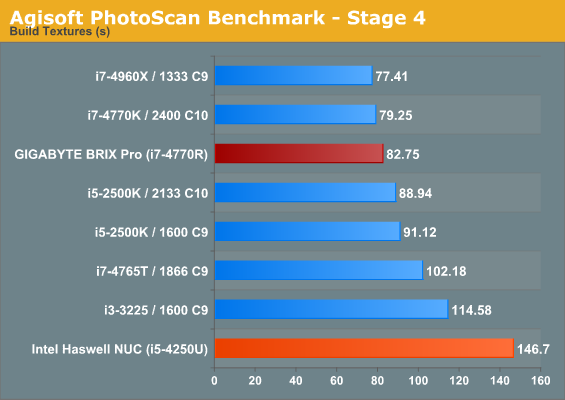 The second stage also reports the throughput rate of the CPU and GPU in million points per second. For the BRIX Pro, in the CPU only mode, we had a rate of 124.99 mp/s. Using OpenCL acceleration, the CPU and GPU had rates of 69.5 mp/s and 98.32 mp/s respectively. The corresponding numbers for the NUC were 68.36 mp/s, 20.39 mp/s and 78.59 mp/s.
Essentially a prosumer real-world test, we hope to put more of our systems under this benchmark in the future. Ian already has a large number of custom-built systems for which he will present benchmarks in his motherboard reviews.
Synthetic Benchmarks Thermal Performance and Power Consumption
Tweet
PRINT THIS ARTICLE
POST A COMMENT