As mentioned in the BIOS section, on the high end segments for motherboards often the manufacturer will partition the top range with new features or a new look. Gigabyte for the most part has not done this specifically with the UP7 – the usual gamut of EasyTune6 and 3DPower are here in their original form, as well as some of the newer Gigabyte software utilities such as USB Blocker and TweakLauncher. The only ‘new’ skin comes with the Gigabyte branded version of CPU-Z, the system identification tool used by overclockers to verify and confirm the hardware they are using to others. The CPU-Z skin is an ‘OC Oriented’ feel for the G1 range as well, rather than something orange and shouty for the UP7.

First up is the driver CD itself, which is still the same design layout as far back as P67 at least: 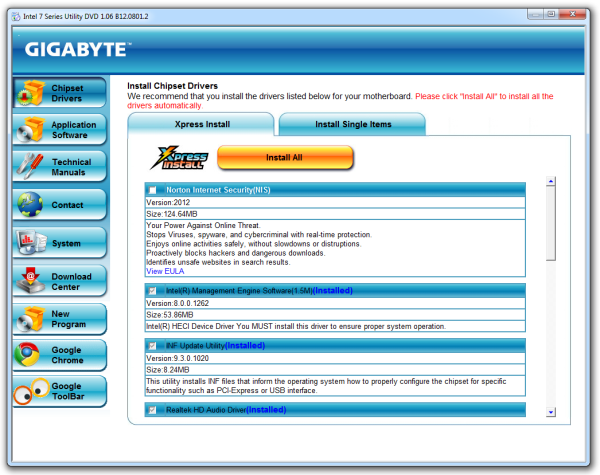 The disk first shows a list of ‘Chipset Drivers’ from which the user can install all at once, or deselect the ones not needed. Notice in the screenshot above that ‘Norton Internet Security’ is considered a chipset driver, rather than application software. All the installs are silent, leaving the user to click reboot after they are done. After a driver install, the disk asks if the user wants Gigabyte utilities installed (EasyTune6 and AutoGreen), which are installed with a click on the Yes button.

Other software on the CD has to be installed individually: 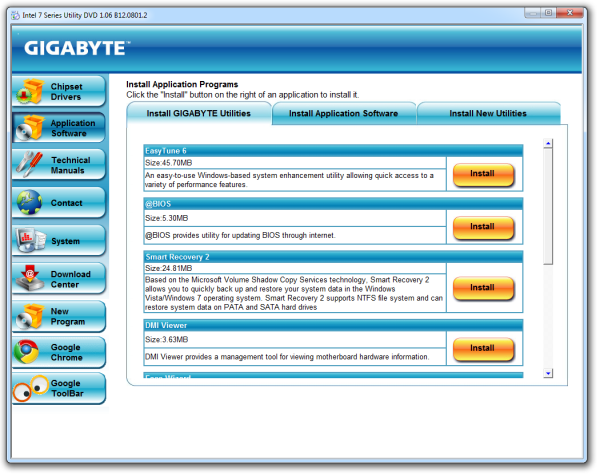 Anything under the ‘Install New Utilities’ tab is a one-by-one install process, such as 3D Power and 3TB Unlock. Annoyingly Gigabyte has not included the newer software on the CD, such as USB Blocker, TweakLauncher and CPU-Z GB Edition – this has to be downloaded via the website.

The main part of the software is EasyTune6. One issue with ET6 is that it requires Flash to run, which is not normally part of my regular testing system install. I noticed that if I loaded ET6 after install and I was not connected to the internet, it would try and load a Flash installer. This installer would keep loading/unloading itself from memory and not do anything - only when I connected the internet did it silently do stuff in the background and load ET6. This is slightly odd behavior. Nevertheless when ET6 is finally opened, the first screen is the QuickBoost options: 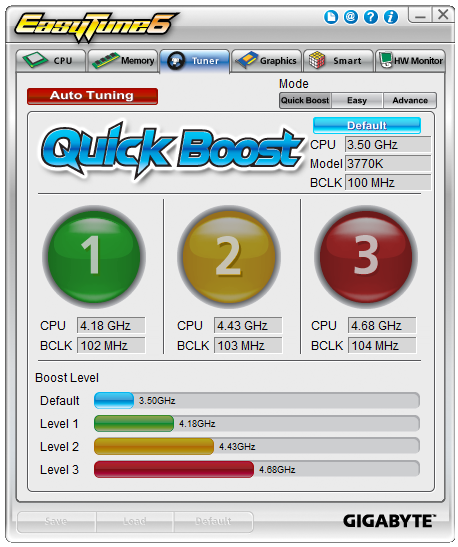 The software probes the system being used, and offers three different overclock profiles from fairly conservative (4.18 GHz) to mildly extreme (4.68 GHz) on our i7-3770K. The Auto Tuning option at the top is another way to go, which attempts to find the peak overclock of the system environment automatically through stress testing and consecutive improvements. We cover these in the Overclocking section later.

For manual overclocks, users can select ‘Easy’ of ‘Advance’ on the top right of the QuickBoost screen which opens up manual adjustment of frequencies and voltages: 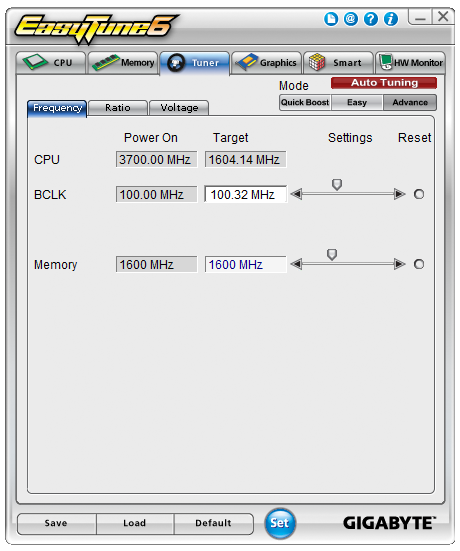 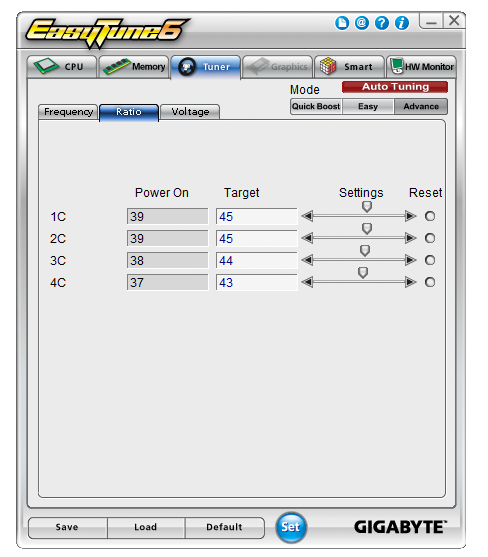 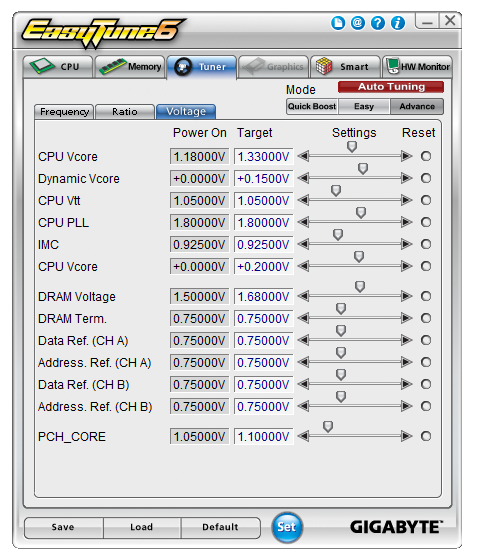 As the Z77X-UP7 has onboard OC buttons, most extreme overclockers will not even install ET6 and use the buttons instead. For when the system is in a case, ET6 offers the OS tools to perform the overclock, although some options may require a system reboot. Even then, the settings are applied after ET6 is loaded. This leads to some issues if the user requests a BIOS reset, which is often the regular way to deal with an overclock. As ET6 can load an OC profile on entering the OS, it essentially does not matter what the BIOS says. I had issues when ET6 would load an overclock after a BIOS reset, and then forcefully apply the previous BCLK adjustment via BIOS and the multiplier in the OS. Despite restoring the BIOS to defaults, the BCLK OC was still there, until I disabled ET6 loading any overclock profile. I have mentioned this to Gigabyte, to make ET6 take note if a BIOS reset was instigated and adjust appropriately / put up a message box asking to apply the previously saved overclock. 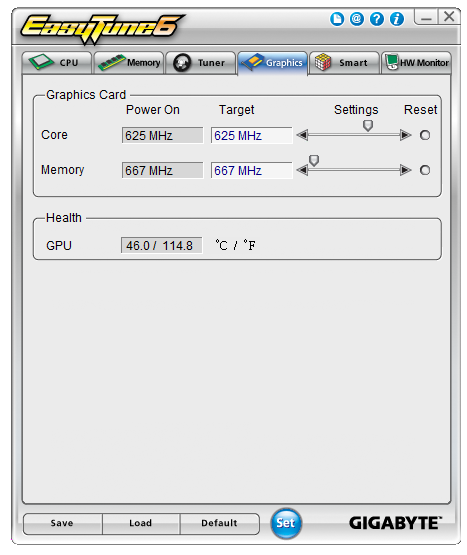 The HWMonitor tab is another oddity of the package – while monitoring tools as a whole are part of the motherboard ecosystem, this tab does everything the wrong way round. The tab with the graph of value vs. time initially shows voltages (which apart from VCore is not meant to change much), and the ‘Fan/Temp’ tab deals with when certain sensors get out of comfortable ranges. I would much rather have a graph of temperature and fan against time to begin with, followed by warnings when voltages go awry.

The final tab is the ‘Smart’ tab, where we can control the fan headers via the OS. 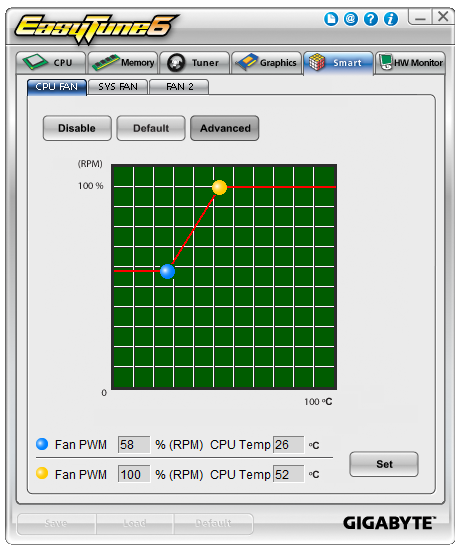 Despite the UP7 having a large number of fan headers, from ET6 we can only control 4 of them from three groups of settings. As mentioned in the BIOS section, the fan controls on Gigabyte boards a very basic, and in the OS we can only select a two point gradient for the fans with the top point of the gradient being at 100% power. Again, the OS system assumes that power applied to the fan is directly proportional to the RPM of the fan, which is completely wrong as mentioned before. In due course Gigabyte will update the fan ecosystem on their boards, and the tools to do this cannot come soon enough.

Almost all motherboard manufacturers now supply both OS and BIOS tools to update the operating system, with BIOS tools taking some time to filter down to the lower volume manufacturers. The @BIOS software from Gigabyte has been part of the software package for a number of years, allowing users to probe the online servers for new versions or dealing with BIOS files the user may have downloaded. I suspect more users are more comfortable updating the BIOS with software rather than in the BIOS itself, so it can be a relief for the user to have an easy-to-use system. The only thing missing is perhaps some integration with the rest of the software on the board, rather than dealing with multiple icons for all sorts of different things.

One of the thorns in Gigabyte’s side, after launching 3D BIOS, was the launch of 3D Power. This software is designed to take advantage of the digital power options onboard, dealing with switching frequencies, load line calibration and phase response to requests for power. 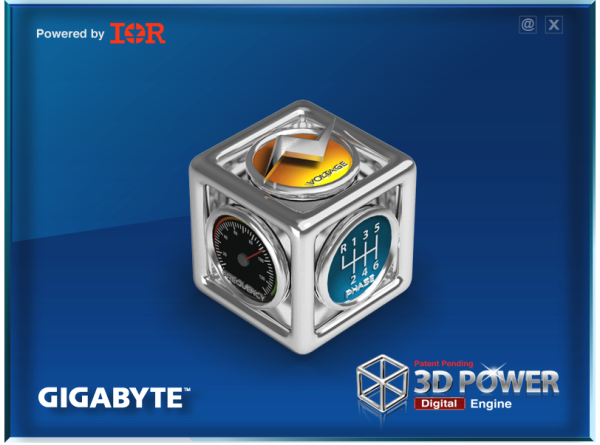 However, the software itself is poorly written. Despite being written in Flash (most likely for visuals), it fails across the board in terms of user experience – the interface is slow, the animations are awkward, and there’s no option to reduce the whole thing to a menu system for power users. At a guess, the software must have been written by an intern – in an ecosystem where smoothness is a key part of the package, I am surprised Gigabyte has not called for it to be re-written by anyone more senior.

At the request of some of Gigabyte’s business clients, USB Blocker was created – a niche software utility to enable/disable USB ports to various types of devices. This allows office or public computers to reject devices (such as USB keys) for fear of viruses or theft. Last time I reviewed the software, I laid out some concerns due to the software nature of the utility. Yes it can be password protected, but it does not apply in the BIOS, and can be uninstalled if the machine is booted in safe mode. The only way around this is to make USB Blocker part of the BIOS itself, however there might be issues dealing with different types of USB device on that front. 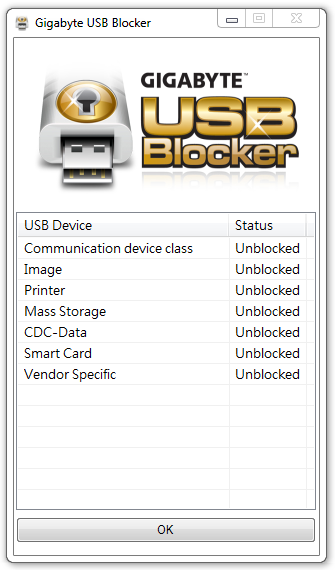 Overclockers rejoiced when Gigabyte TweakLauncher was created. Using ET6, as mentioned before, to deal with clock speeds and voltages was cumbersome and could result in system instability. When trying to go for those mammoth benchmark scores, stability is everything and GBTL is lightweight without any GUI to keep the extreme users happy. The main frequency and voltage options can be changed immediately here, along with all primary and secondary memory sub-timings. The Z77X-UP7 takes care of the CPU frequency settings portion of GBTL with the OC buttons, but extreme users will still find the program useful for everything else it does. 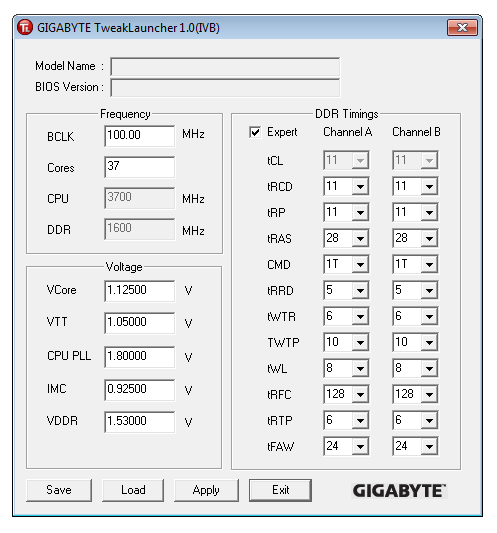 As part of a growing trend, motherboard manufacturers are spending money on designing skins for CPU-Z, the CPU recognition tool used by overclockers to verify the hardware being used in screenshots of benchmark scores. Alongside the plain CPU-Z skin, there are downloads for the ASUS ROG, Gigabyte G1 series, and now the Gigabyte OC range, but the potential downside of these skins is that the main CPU-Z software is the most up-to-date, should any new significant change happen in the code base. The software is of course compatible for any system, including other manufacturers and sockets – for example, here on Sandy Bridge-E: 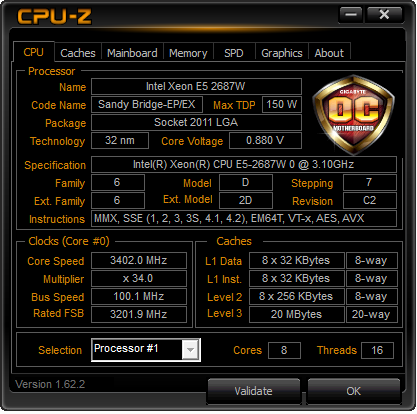