Bringing things to a close, most of what we’ve seen with Titan has been a long time coming. Since the introduction of GK110 back at GTC 2012, we’ve had a solid idea of how NVIDIA’s grandest GPU would be configured, and it was mostly a question of when it would make its way to consumer hands, and at what clockspeeds and prices.

The end result is that with the largest Kepler GPU now in our hands, the performance situation closely resembles the Fermi and GT200 generations. Which is to say that so long as you have a solid foundation to work from, he who builds the biggest GPU builds the most powerful GPU. And at 551mm2, once more NVIDIA is alone in building massive GPUs.

No one should be surprised then when we proclaim that GeForce GTX Titan has unquestionably reclaimed the single-GPU performance crown for NVIDIA. It’s simply in a league of its own right now, reaching levels of performance no other single-GPU card can touch. At best, at its very best, AMD’s Radeon HD 7970GE can just match Titan, which is quite an accomplishment for AMD, but then at Titan’s best it’s nearly a generation ahead of the 7970GE. Like its predecessors, Titan delivers the kind of awe-inspiring performance we have come to expect from NVIDIA’s most powerful video cards.

With that in mind, as our benchmark data has shown, Titan’s performance isn’t quite enough to unseat this generation’s multi-GPU cards like the GTX 690 or Radeon HD 7990. But with that said this isn’t a new situation for us, and we find our editorial stance has not changed: we still suggest single-GPU cards over multi-GPU cards when performance allows for it. Multi-GPU technology itself is a great way to improve performance beyond what a single GPU can do, but as it’s always beholden to the need for profiles and the inherent drawbacks of AFR rendering, we don’t believe it’s desirable in situations such as Titan versus the GTX 690. The GTX 690 may be faster, but Titan is going to deliver a more consistent experience, just not quite at the same framerates as the GTX 690.

Meanwhile in the world of GPGPU computing Titan stands alone. Unfortunately we’re not able to run a complete cross-platform comparison due to Titan’s outstanding OpenCL issue, but from what we have been able to run Titan is not only flat-out powerful, but NVIDIA has seemingly delivered on their compute efficiency goals, giving us a Kepler family part capable of getting far closer to its theoretical efficiency than GTX 680, and closer than any other GPU before it. We’ll of course be taking a further look at Titan in comparison to other GPUs once the OpenCL situation is resolved in order to come to a better understanding of its relative strengths and weaknesses, but for the first wave of Titan buyers I’m not sure that’s going to matter. If you’re doing GPU computing, are invested in CUDA, and need a fast compute card, then Titan is the compute card CUDA developers and researchers have been dreaming of.

Back in the land of consumer gaming though, we have to contend with the fact that unlike any big-GPU card before it, Titan is purposely removed from the price/performance curve. NVIDIA has long wanted to ape Intel’s ability to have an extreme/luxury product at the very top end of the consumer product stack, and with Titan they’re going ahead with that.

The end result is that Titan is targeted at a different demographic than GTX 580 or other such cards, a demographic that has the means and the desire to purchase such a product. Being used to seeing the best video cards go for less we won’t call this a great development for the competitive landscape, but ultimately this is far from the first luxury level computer part, so there’s not much else to say other than that this is a product for a limited audience. But what that limited audience is getting is nothing short of an amazing card.

Like the GTX 690, NVIDIA has once again set the gold standard for GPU construction, this time for a single-GPU card. GTX 680 was a well-built card, but next to Titan it suddenly looks outdated. For example, despite Titan’s significantly higher TDP it’s no louder than the GTX 680, and the GTX 680 was already a quiet card. Next to price/performance the most important metric is noise, and by focusing on build quality NVIDIA has unquestionably set the new standard for high-end, high-TDP video cards.

On a final note, normally I’m not one for video card gimmicks, but after having seen both of NVIDIA’s Titan concept systems I have to say NVIDIA has taken an interesting route in justifying the luxury status of Titan. With the Radeon HD 7970 GHz Edition only available with open air or exotic cooling, Titan has been put into a position where it’s the ultimate blower card by a wide margin. The end result is that in scenarios where blowers are preferred and/or required, such as SFF PCs or tri-SLI, Titan is even more of an improvement over the competition than it is for traditional desktop computers. Or as Anand has so eloquently put it with his look at Falcon Northwest’s Tiki, when it comes to Titan “The days of a high end gaming rig being obnoxiously loud are thankfully over.”

Wrapping things up, on Monday we’ll be taking a look at the final piece of the puzzle: Origin’s tri-SLI full tower Genesis PC. The Genesis has been an interesting beast for its use of water cooling with Titan, and with the Titan launch behind us we can now focus on what it takes to feed 3 Titan video cards and why it’s an impeccable machine for multi-monitor/surround gaming. So until then, stay tuned. 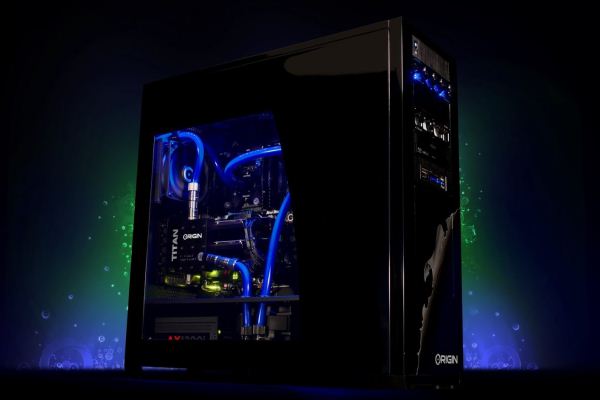