Let’s talk about cellular on the Nexus 4, which is for many people the main point of contention with the device. Google didn’t do itself any favors by initially posting incorrect specs for cellular compatibility, when in fact the Nexus 4 was capable of much more. Initially, that spec table showed inclusion of only HSDPA 21.1 (single-carrier WCDMA with 64 QAM), when in fact the Nexus 4 supports pentaband WCDMA up to HSDPA 42.2 (dual-carrier WCDMA with 64 QAM) courtesy of MDM9215. Of course, what gets left out is LTE support, and the reality of that choice is a device completely detached from carrier involvement. The realities of engineering hardware to support both LTE Bands 17 and 13 (for both AT&T and Verizon in the USA, respectively) basically necessitate at least two SKUs, and I have a feeling that Google just wasn’t ready to make that commitment. Band 4 (AWS) could essentially be supported with the power amplifiers and transceiver that already are onboard the Nexus 4, but again it ultimately comes down to a particular OEM choice whether these get supported. The rest of the LTE band support situation is similarly complicated, to say nothing of the political involvement required to support LTE and whatever CSFB (circuit switched fallback) or legacy hard handover is required for each carrier at present. I have a feeling that Google wanted to get the Nexus 4 out the door quickly and without making a million and one models it would have to build images and OTA delta updates for, and the result is a pentaband WCDMA phone with DC-HSPA+ support.

When I heard that LG would be making the next Nexus, I also heard that it would be WCDMA only. Honestly I thought it was obvious that those two go hand in hand to minimize carrier involvement in Google’s purest form of Android. The original goal of Nexus was to change the way that users shop for handsets, primarily in the USA. The goals were lofty at that time and the reality was that Google didn’t yet have the necessary infrastructure (like the Play Store) to do it, nor was hardware at the level required to deliver a single-SKU solution for all the UMTS bands out there. Galaxy Nexus was the first pentaband Nexus, thus it only makes sense for the follow up to likewise be pentaband WCDMA.

Internationally, DC-HSPA+ has widespread support, the reality is that in the USA AT&T’s lack of support for DC-HSPA+ is more of an aberration than the norm for UMTS networks across the globe. Not having LTE support would be much easier to stomach for AT&T subscribers if the carrier enabled DC-HSPA+. T-Mobile has always been something of a silent (or not so silent) target for Google’s Nexus phones, with the G1, Nexus One, and Nexus S all coming in AWS-flavors before 850/1900 (Cellular/PCS) flavors for AT&T, and T-Mobile has had DC-HSPA+ rolled out to nearly all of its WCDMA footprint for months now.

In reality, the cellular and RF architecture of the Nexus 4 is a dramatic improvement over the Galaxy Nexus, which was based on the still-ubiquitous Intel XMM6260 65nm baseband and lacked receive diversity or interference cancelation in its implementation. I was never really fully satisfied with RF performance on the Galaxy Nexus, and although I carried it as my daily driver for months, I could never shake that thought at the back of my head that I could definitely be achieving higher throughput with almost any of my other handsets even on AT&T (up to HSDPA 14.4, single carrier 16 QAM).

Anyhow, the Nexus 4 is a dramatic improvement. It includes the latest and greatest 28nm Qualcomm baseband (MDM9215M), their flagship transciever (WTR1605L) and includes full receive diversity on all WCDMA bands.

Anritsu recently loaned me an MD8475A signaling tester base station emulator for testing devices, and I decided to go and check out the maximum theoretical performance difference between the Galaxy Nexus and Nexus 4 just for illustrative purposes. In this test I corded up the Galaxy Nexus (since it has external antenna ports) and placed the Nexus 4 on top of an antenna, and setup a simulation running an HSPA+ 3GPP Release 8 network running on UMTS Band 4 (AWS). I tested using UDP over iperf on this simulated network. There were additional cabling losses due to me not being able to cable up the Nexus 4 so I adjusted Tx power appropriately. 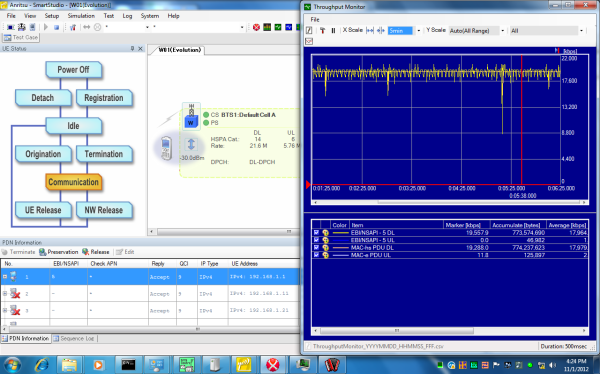 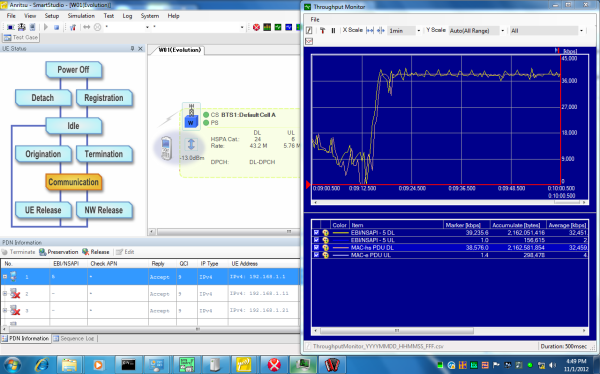 Corded up, the Galaxy Nexus can eek out just over 19 Mbps on 64QAM single carrier WCDMA which is the maximum that hardware supports. Moving to dual carrier on the Nexus 4 buys the device unsurprisingly roughly double the throughput at just shy of 40 Mbps. This is of course in basically an ideal signal environment for both devices.

In real world performance testing I turned to speedtest.net and running a bunch of tests, then making a few histograms of the resulting data. I’m still a big fan of the fact that T-Mobile has always been first to these upgrades to WCDMA, first with 64QAM, then with dual carrier (DC-HSPA+). 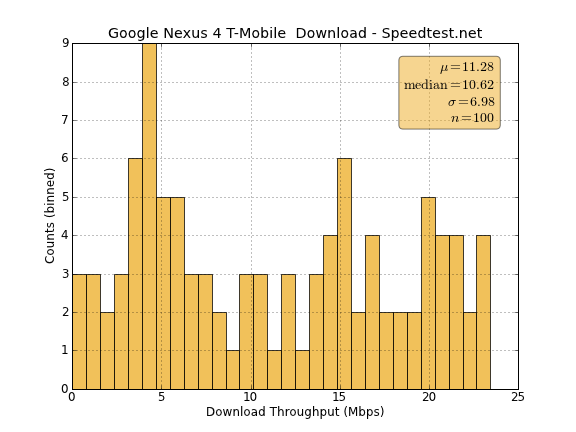 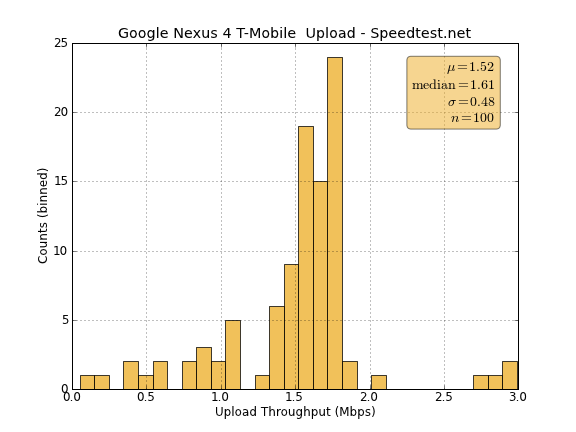 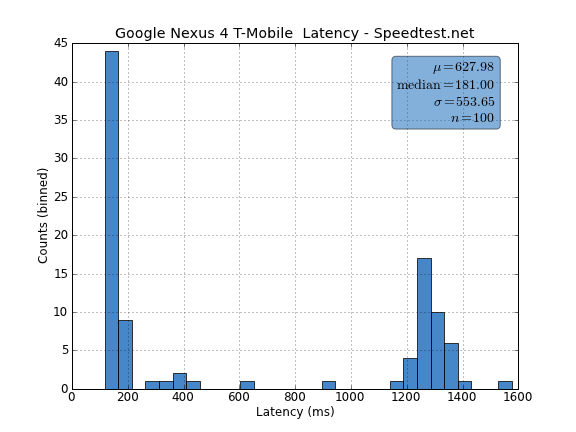 The speeds I see out of the Nexus 4 on T-Mobile are on par with my expectations for that network. The maximum downstream throughput we see at just shy of 24 Mbps is essentially the result of the maximum bitrate with two 16QAM WCDMA carriers aggregated together. Again getting to 64QAM on the downlink can be quite difficult, I’ve seen breakdowns where 64QAM only gets used sub 10% of the time in the real world for WCDMA. At cell edge the improvement that receive diversity brings should be dramatic for users upgrading from Galaxy Nexus to Nexus 4.

GNSS (Global Navigation Satellite System) is supplied courtesy MDM9215 on the Nexus 4, which offers GPS and GLONASS support. I’ve talked at length about this in other reviews, and like other implementations based around Qualcomm’s GNSS, the Nexus 4 locks very fast even indoors. There’s really nothing more to add about GNSS on the Nexus 4 except to note that it performs very well just like other MDM9x15 based devices I’ve played with.

There’s an Avago 3012 GNSS front end with LNA and filters for GPS and GLONASS on the Nexus 4 PCB that I was able to identify as well right near the GNSS antenna feed.

The Nexus 4 includes dual band (2.4 and 5 GHz) Wi-Fi support, which as far as I can tell is supplied by the Qualcomm “WCNSS” solution leveraging the digital baseband onboard APQ8064 and some external RF. I have no doubt the actual package is hidden under the last remaining EMI can I couldn’t remove on the Nexus 4 PCB right near the Wi-Fi antenna feed.

I noted that there’s an optimization toggle under Advanced for the Nexus 4 which changes some things around. There still is a band preference toggle as well. I tested the Nexus 4 the same way I always do with iperf on my myriad 802.11n networks and made some graphs. 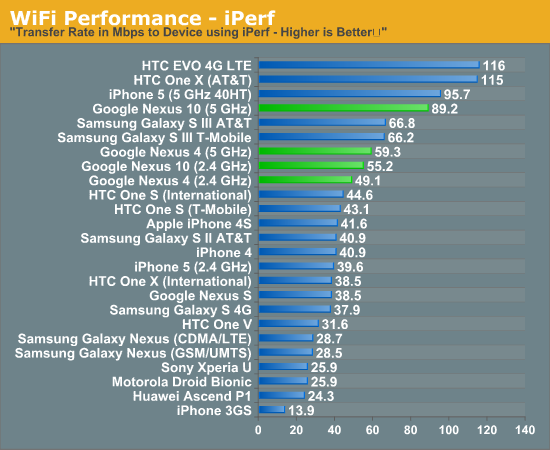 What’s curious to me is that the 5 GHz support for Nexus 4 doesn’t include 40 MHz support, instead the Nexus 4 attaches at 72 Mbps (the 20 MHz, short guard interval rate) on both 2.4 and 5 GHz. Likewise we see similar throughput on both bands. I have no complaints about range, the Nexus 4 is on par with my expectations.