We used two different approaches to benchmark the docking station. In order to get a quick idea of the capabilities of the unit, we used HD Tune Pro's benchmarks on both the Corsair Performance 3 SSD (connected through the SATA slot) as well as the Western Digital EIDE drive (connected to the IDE slot). After this, we shifted our focus to IOMeter and performed the four corners test (4KB Random Read / 4KB Random Write / 128KB Sequential Read / 128KB Sequential Write) as well as the disk performance bench (described here). First, let us take a look at the HD Tune Pro results.

The gallery below presents the various HD Tune Pro benchmarks performed on a raw drive connected to the SATA slot. The Corsair P3 128 GB SSD achieves an average of around 170 MBps and 150 MBps in sequential reads and writes respectively. Very small transfer sizes (such as 512B) bring about a large penalty, with speeds reducing to as low as 1.7 MBps reads and 4.2 MBps writes.

Moving on to the IDE slot, we repeated the above benchmarks. Sequential transfers benchmark around 17 MBps and 39 MBps for reads and writes. Small transfer sizes bring it down to 35 KBps and 55 KBps.

Our IOMeter benchmarks also present similar results. The graph below shows the SATA slot performance over USB 3.0. We also show the performance obtained by connecting the Corsair P3 SSD directly to one of the SATA 6 Gbps ports. In addition to the standard IOMeter tests, we also performed some robocopy benchmarks by transferring a Blu-ray folder structure of the HQV 2.0 Benchmark disc from local storage to the drive in the external dock and back to the local storage. Note that the robocopy benchmark speeds in the direct SATA case are probably held back by the speed of the local storage (a Kingston SSDVNow 128 GB SSD which doesn't have a SATA 6 Gbps controller). 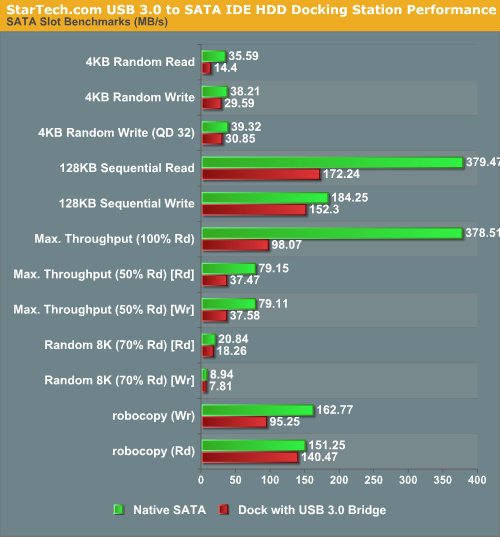 Enabling Turbo mode in the Asus control utility did improve read performance a little bit, but actually made the write performance worse. Note that UASP is not supported.

The IOMeter and robocopy tests were repeated on the IDE drive also. However, we didn't take the trouble to verify Normal vs. Turbo mode with the IDE drive. 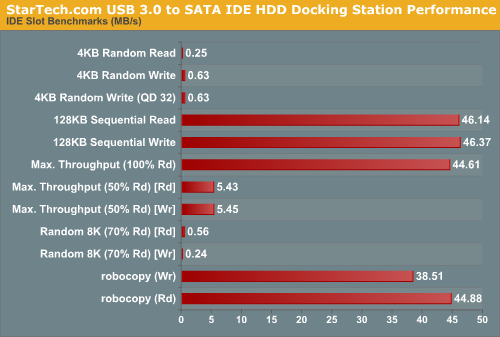 We also tried simultaneous IOMeter benchmarks on both slots. While the unit is indeed capable of dual slot operation, we found that the IDE slot occupied the major time slots in the random workloads. The bandwidth and average response times in the graphs below shed more light. 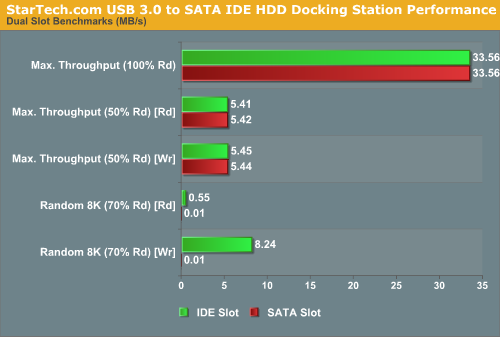 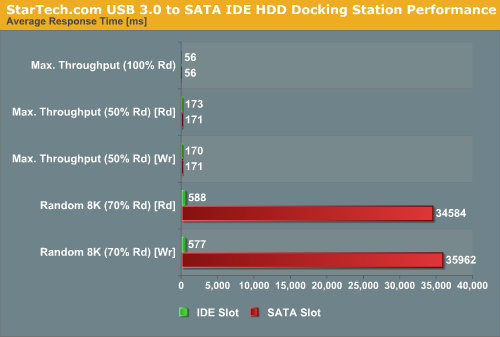 We are not sure if the results are an indication of the way IOMeter operates, or it has something to do with the bridge controller. In any case, most scenarios involving dual slot operation should not involve too many random transfers and in that case, the bandwidth is shared equally between the two slots (and held back by the slower of the two).