The ASRock Vision 3D 252B is basically a notebook solution. It wouldn't make sense to compare it with full blown desktop Sandy Bridge solutions (or for that matter, any system with a power consumption of more than 100W). In the comparative benchmarks provided in the rest of this review, we will provide the scores obtained by the Vision 3D 252B and other similar SFF HTPC solutions.

This metric is often considered meaningless, but we feel it serves as an indicator of what could be the bottleneck in a system for pre-built HTPCs. With such a premium configuration, the only letdown is the absence of a SSD, and it is duly reflected in this index with the primary hard disk weighing in at 5.9.

Using a SSD as the primary disk is the only thing that could have been done in order to improve this score.

The graphs below give an idea of where the ASRock Vision 3D 252B stands with respect to performance when compared with other SFF HTPCs. 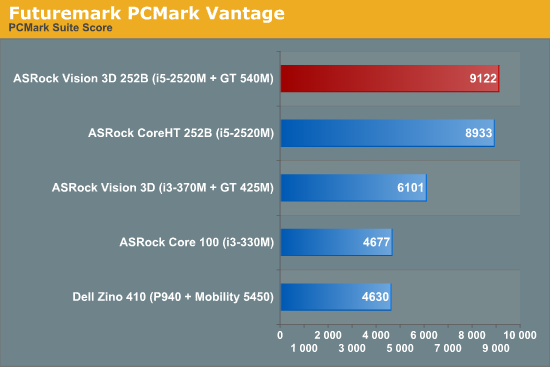 We also ran the 3D Mark Vantage and 3D Mark 06 benchmarks and the graphs below show how the GT 540M (in conjunction with the Core i5-2520M) fares when compared to the graphics capabilities of other pre-built SFF HTPCs. 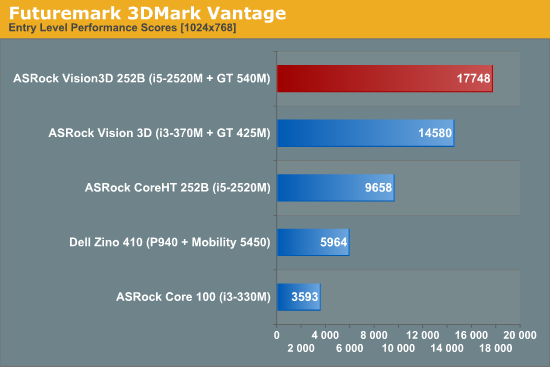 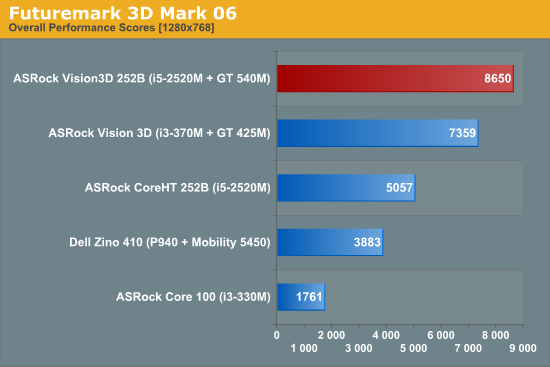 The Vision 3D 252B is miles ahead of the SFF HTPCs from last year. This goes on to prove that the bar for the high-end HTPC just keeps getting higher.

In addition to the above synthetic benchmarks, a couple of common HTPC workloads were also benchmarked. We have some data on the x264 encoding performance using the i5-2520M. Note that we are unable to utilize QuickSync for this test because QuickSync is unable to provide any for of support for accelerating x264 encode. As expected, the results match what was obtained in the CoreHT 252B review. 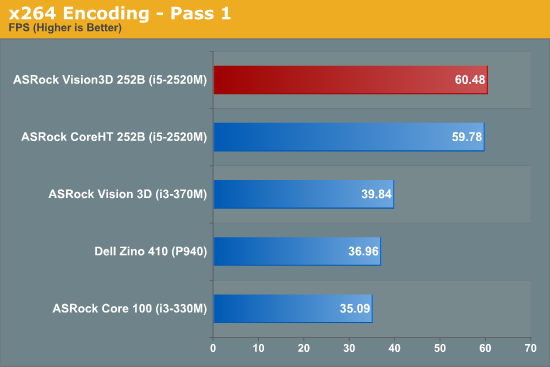 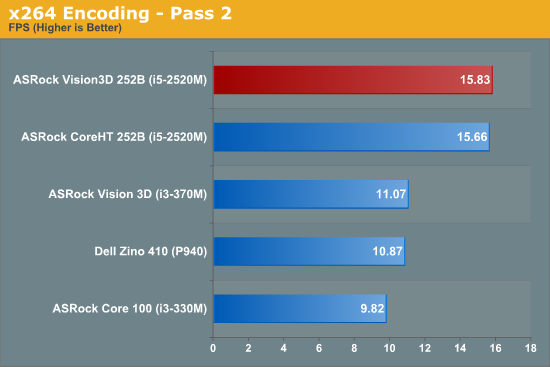 An estimate of how well WinRAR performs, particularly with respect to processing split archives, wraps up this section. To evaluate this, we take a 4.36 GB MKV file, compress it in the 'Best' compression mode into a split archive (97.1 MB each), which results in 44 files on the hard disk. The time taken to decompress this split archive is then recorded. The performance in this benchmark is heavily influenced by the hard disk in the system. It looks like both the hard disk characteristics of the Vision 3D 252B are the same as that of the CoreHT 252B. 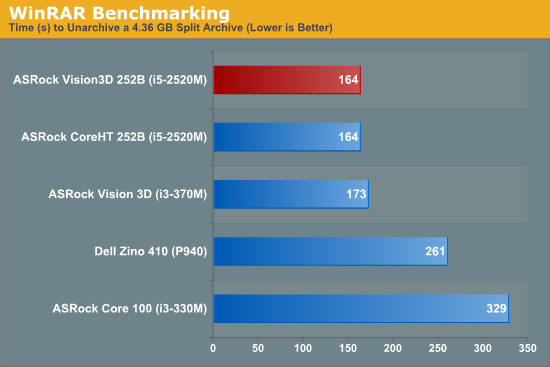 We have deliberately refrained from dealing with gaming benchmarks in this review. Instead, we will focus on very HTPC-centric benchmarks over the next few sections. For readers interested in finding out how the GT 540M fares in gaming bencmarks when coupled with a mobile Sandy Bridge processor, I suggest taking a look at Dustin's gaming benchmarks prepared as part of a notebook review. Though Dustin doesn't have kind words for the GT 540M, note that the Vision 3D 252B is definitely a step up from the first generation Vision 3D (for which we have gaming benchmarks here).