I've written previously about the SSD lottery you play when you buy a new MacBook Air. As with many commodity components, Apple sources its SSDs from two sources. For now, that appears to be Toshiba and Samsung. Apple tends to pick suppliers that can deliver a reliable product in the quantities it's interested in. In the storage space at least, Apple doesn't seem to be overly concerned with performance but rather making sure the solution works. 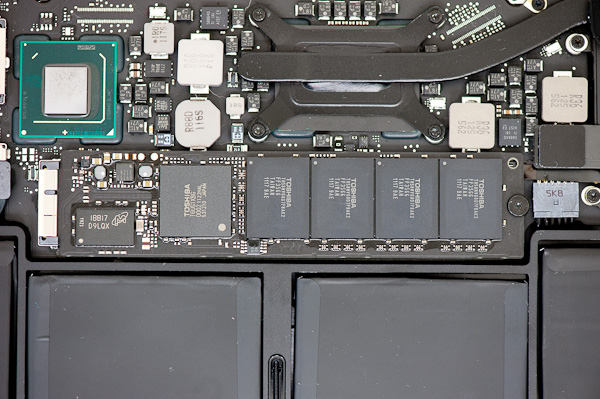 A year ago, the Toshiba and Samsung controllers offered fairly similar performance. These days the same isn't true. While Samsung has updated its controllers, Toshiba's solution still offers the fairly abysmal random write performance it did a year ago. With the recent release of the Samsung SSD 830, I expect the trend of Samsung drives increasing in performance will continue next year as well.

Unlike the rest of Apple's notebook lineup however, it's not so easy to just swap in a higher performing (or larger capacity) SSD in your MacBook Air. The very first MBAs used a PATA LIF connector, a rarity on most drives. Apple eventually transitioned to a SATA LIF connector, and then with the release of the 2010 MacBook Air we encountered a new thin form factor SSD with a custom interface connector. In all of those cases, the market for third party MacBook Air SSDs popped up at some point post-launch. The 2010/2011 MacBook Air has been no different.

If you've followed the aftermarket Mac support business then OWC should be no stranger to you. If you haven't heard of OWC from their Mac efforts, there's always the fact that second to only OCZ, no one has been quicker at releasing SSDs based on brand new SandForce controllers. 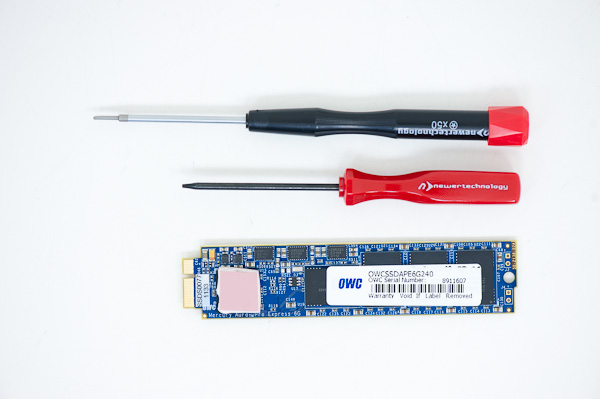 The drive is available in 120GB and 240GB capacities, for $280 and $550 respectively. Both drives come with pentalobe and torx drivers to aid in opening your MBA and replacing your old drive. 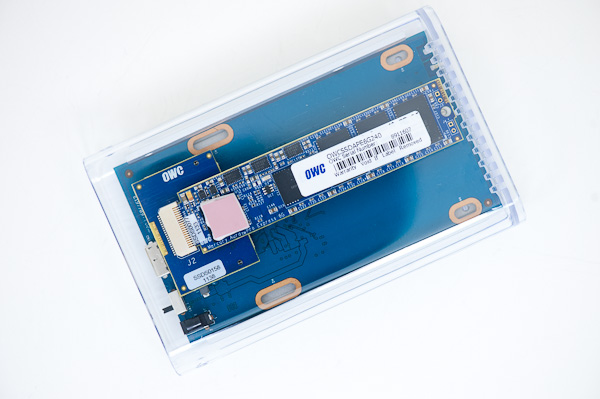 For another $35 OWC will sell you an external USB 2.0/3.0 enclosure that can house your old MBA SSD either to help you transfer your data or give you a sweet, high performance external drive once you're done.

OWC sent me a 240GB Aura Pro, which I installed into an 11-inch MacBook Air. The installation process was a cinch. The only hiccup was that I couldn't just clone my 256GB Toshiba SSD using Disk Utility since the Aura Pro was technically smaller. Instead I used Lion's internet recovery to download and install a fresh copy of OS X, before restoring my data and installing benchmarks. 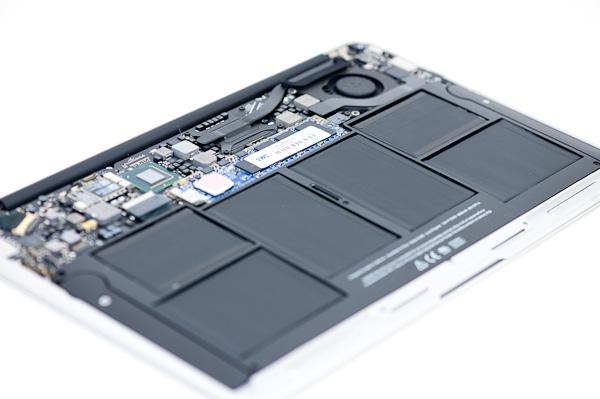 If you've followed our SSD reviews you'll know what to expect next. SandForce's SF-2281 controller is the fastest option on the market today, while the Toshiba controller Apple uses is pretty much on the opposite end of the spectrum. I ran our standard four-corners Iometer test to put into perspective just how much faster the OWC upgrade is:

Performance is just staggering. The comparison is borderline unfair because both the Samsung and Toshiba controllers Apple uses in its MacBook Air are really a generation old at this point, while the Mercury Aura Pro Express is the absolute latest and greatest 6Gbps solution SandForce offers. The performance advantage is noticeable. The upgrade does make everything feel snappier, particularly compared to a MBA equipped with a Toshiba SSD. Large file transfers complete quicker and heavy multitasking workloads see an improvement as well.

SandForce achieves this performance advantage by using real time compression and data deduplication algorithms to reduce the amount of data actually written to the NAND. Since much of what we write to our drives in the course of normal use is easily compressible data, SandForce's technology is quite effective. Where the controller falls short however is if you're moving incompressible data, for example already highly compressed videos or encrypted data. While highly compressed content like H.264 movies will really only impact sequential read/write speed, enabling full disk encryption under OS X impacts all of your data. Truly random data is impossible to compress/dedupe, so I enabled FileVault under Lion and re-ran our performance tests on the Aura Pro:

Sequential write performance takes a pretty significant hit, but the rest of the metrics look ok. In fact, I'd say even if you're running with your drive encrypted you'll have a better experience on the OWC drive than with either of the Apple SSDs.

With the OWC Mercury Aura Pro Express 6G you get much better performance than the stock Apple SSDs regardless of usage. Is there any downside to going with the aftermarket drive? Unfortunately there appears to be one:

It's natural for the OWC solution to draw more power under load, you're getting over twice the performance so the increase in power draw is actually not an issue (better power efficiency since you'll be at idle quicker than with a stock SSD). The bigger concern is what happens at idle. My 11-inch MacBook Air typically idles at 5.5W, swapping in the OWC drive increased that idle power consumption to 6.2W. Now this is measured at the wall, so it takes into account AC adapter inefficiency. The actual impact at idle should be somewhere in the 300mW - 400mW range. For a mostly idle workload you'd probably see a 30 minute reduction in battery life.

The OWC Mercury Aura Pro Express 6G is a well executed SSD upgrade for 2011 MacBook Air owners. You get an absolutely huge performance increase and an option for users who want the entry level 2011 MBAs but with a larger capacity SSD. If your MacBook Air is your primary workhorse, perhaps even your desktop replacement, and you got stuck with a Toshiba SSD the OWC option makes a lot of sense. OWC thankfully provides everything you need in the box to get into your MacBook Air and swap drives. 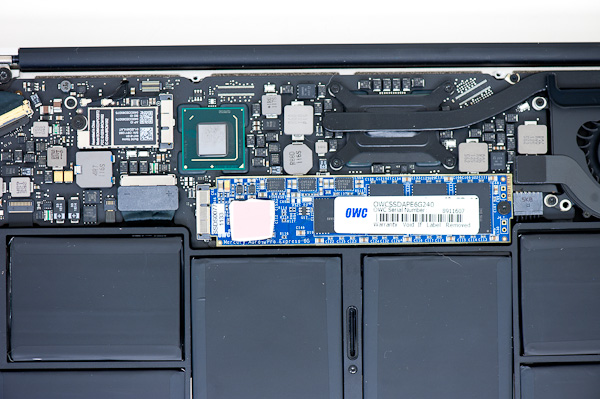 The downside is power consumption. At idle the SandForce controller simply draws more power than the Toshiba controller in the MBA we tested. The overall impact on battery life won't be tremendous (perhaps 5% on a mostly idle workload), but if you're already on the edge of usability with the battery life from your stock MacBook Air you may want to remain stock.