Given the relatively similar configurations of the two M18x units we've reviewed, it should come as no surprise that thermals are remarkably close between them as well. For reference we're including the results from the NVIDIA GeForce GTX 580M-equipped system to compare against the pair of Radeons in this unit, though it bears mentioning that HWMonitor could only read the temperatures from one Radeon HD 6990M. The RAID 0 configuration also prevents HWMonitor from getting temperature readings from the hard drives. 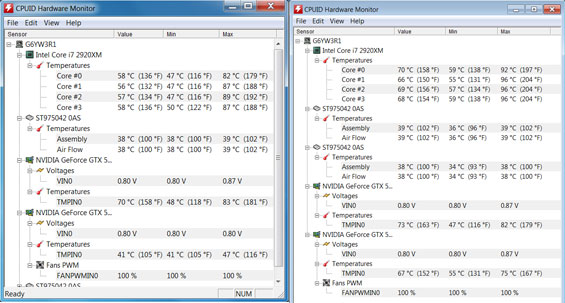 So what can we gather from this information? First, it seems that the pair of GeForces run ever so slightly hotter than the Radeons, and that produces warmer peak core temperatures on the overclocked i7-2920XM. While the GeForces are really pushing the i7-2920XM to its thermal limits, the Radeons still get peak temperatures above 90C on the cores, more than anyone wants to see. 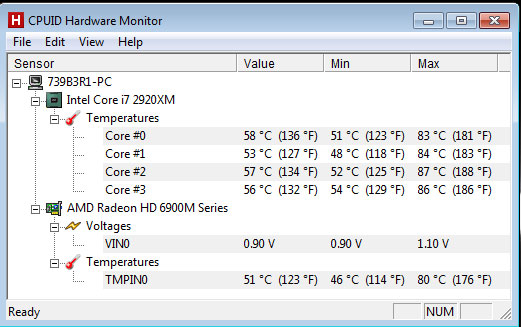 On the plus side, the i7-2920XM's overclock doesn't seem to be exacting too much in the way of heat. At stock speeds thermals are essentially comparable under load when only a single GPU is enabled. End users of the M18x may want to keep an eye on temperatures just to be on the safe side, but should still be reasonably comfortable with a solid overclock on their processor.

As for noise, the fans run too low to really be noticeable when the M18x is idling, but under load it picks up to about 43dB. This is still nowhere near as nightmarishly loud as the Clevo X7200 can get; that notebook has to cool roughly 330 watts of hardware in a chassis roughly the same size as the M18x. Overall the M18x is definitely noticeable when being stressed, but it's not overwhelmingly so.