As a display, the Thunderbolt Display is no different than the 27-inch LED Cinema Display. You lose some of the resolution of the older 30-inch panels but you get a much more compact form factor that feels far less overwhelming on a desk. Having the 27-inch display exclusively for the past year I can honestly say that I don't miss the 30. I've mentioned before that I'm more productive on a single high resolution display vs. two lower resolution panels, the 27 continues to suit my needs very well in that regard.

Quality hasn't changed at all since the previous generation. Color temperatures are finally more reasonable out of the box thanks to Apple's pre-calibration on all panels. Brightness and contrast are both good and calibrated color quality is professional grade. Color gamut is about the only blemish, a side effect of Apple's LED backlight. If you're coming from a notebook panel however, you won't notice the difference. 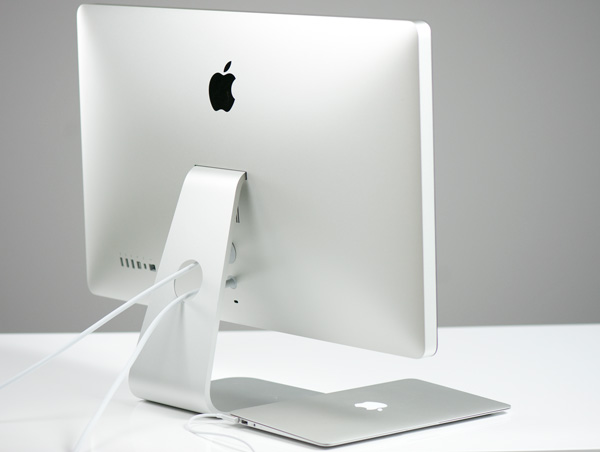 The real improvements here are obviously those enabled by Thunderbolt. Apple is turning its line of displays into docks for its mobile computers rather than just external displays. It started with integrating MagSafe and has culminated in GigE and FireWire controllers now a part of the display. For MacBook Air owners who don't have options for these high speed interfaces to begin with, the Thunderbolt Display is a must-have. If your MBA is a secondary or tertiary computer that only gets taken on trips perhaps the Thunderbolt Display isn't so life changing. For those users who have moved from older MacBook Pros to the 13-inch MBA however, the Thunderbolt Display is a wonderful companion.

For MacBook Pro owners the Thunderbolt Display is more of a convenience than anything else. If you ferry your notebook between locations frequently, having to hook up only two cables vs. several is nice. I don't know how else to word this without sounding incredibly lazy (I promise I'm not), but I'm more likely to move my notebook around if I don't have to unplug/reconnect 7 cables everytime I get back to my desk.

For me the Thunderbolt Display is good but not perfect. I wish it had a 1/8" stereo output, an SD card reader and USB 3.0 support. Give me those things and I'd be ecstatic. There's always next year's model.

Even with its limitations, the Thunderbolt Display is one of a kind. I do hope it's the start of a much larger trend. Short of a CPU and memory there's a bonafide motherboard inside the Thunderbolt Display, featuring many of the components we're used to seeing inside systems but now encased in a display. Thanks to SSDs, Turbo Boost and Thunderbolt the only thing holding notebooks back from being true desktop replacements is GPU performance. Sony has already toyed with the idea of sticking a GPU in an external box connected to their notebooks, perhaps that's something we may see more of in the future. 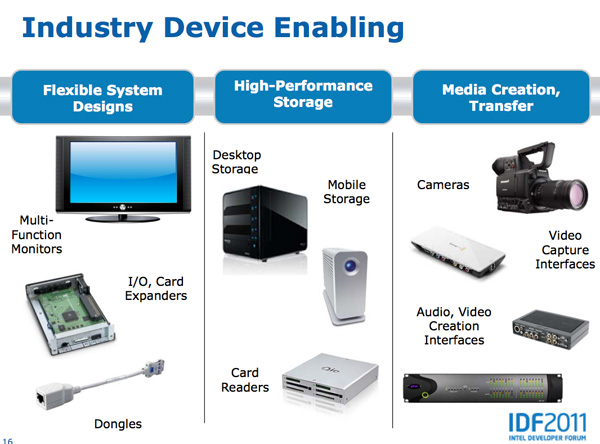 There are still significant concerns over the adoption of Thunderbolt in the future. While it may be free of royalties, there's only one company that makes Thunderbolt controllers: Intel. Not to mention the licensing fees for using the Thunderbolt logo. What made USB and PCIe successful was the ability for many companies to produce and integrate the necessary controllers. I believe we'll need to see the same from Thunderbolt for it to truly become ubiquitous.