In 2006 Intel introduced its tick-tock cadence for microprocessor releases. Every year would see the release of a new family of microprocessors as either a tick or a tock. Ticks would keep architectures relatively unchanged and focus on transitions to smaller manufacturing technologies, while tocks would keep fab process the same and revamp architecture. Sandy Bridge was the most recent tock, and arguably the biggest one since Intel started down this road. 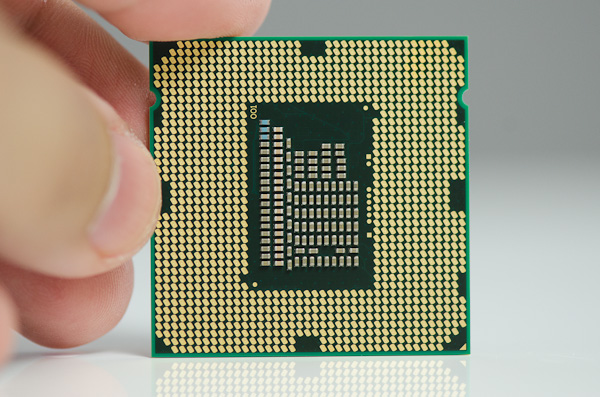 At a high level the Sandy Bridge CPU architecture looked unchanged from prior iterations. Intel still put forth a 4-issue machine with a similar number of execution resources to prior designs. Looking a bit closer revealed that Intel completely redesigned the out-of-order execution engine in Sandy Bridge, while heavily modifying its front end. Sandy Bridge also introduced Intel's high performance ring bus, allowing access to L3 by all of the cores as well as Intel's new on-die GPU.

The Sandy Bridge GPU was particularly surprising. While it pales in comparison to the performance of the GPU in AMD's Llano, it does represent the first substantial effort by Intel in the GPU space. Alongside the integrated GPU was Intel's first hardware video transcoding engine: Quick Sync. In our initial review we found that Quick Sync was the best way to quickly transcode videos, beating out both AMD and NVIDIA GPU based implementations in our tests. Quick Sync adoption has been limited at best, which is unfortunate given how well the feature performed in our tests.

Sandy Bridge wasn't all rosy however. It was the first architecture that Intel shipped with overclocking disabled on certain parts. Any CPU without Turbo Boost enabled is effectively unoverclockable. Intel killed the low end overclocking market with Sandy Bridge. 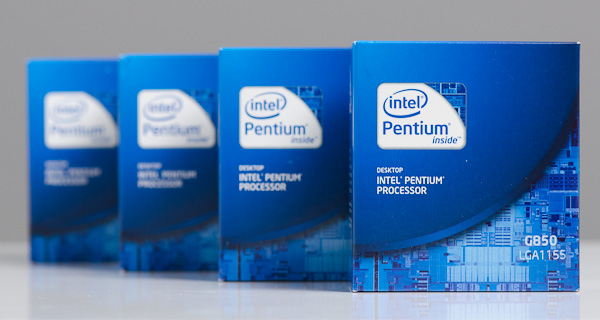 The overclocking limits were a shame as Sandy Bridge spanned a wide range of price points. The low end Core i3-2100 was listed at $117 while the highest end Core i7-2600K came in at $317. While you can't claim that Sandy Bridge was overpriced at the high end, there's always room for improvement.

Despite abandoning Pentium as a high end brand with the 2006 release of Intel's Core 2 Duo, Intel has kept the label around for use on its value mainstream parts. Last year we saw only two Pentium branded Clarkdale parts: the G6950 and G6960. This year, powered by Sandy Bridge, the Pentium brand is a bit more active.

The new Sandy Bridge based Pentiums fall into two lines at present: the G800 and G600. All SNB Pentiums have two cores (HT disabled) with 256KB L2 per core and a 3MB L3 cache. CPU core turbo is disabled across the entire Pentium line. From a performance standpoint, other than missing hyper threading and lower clocks - the Sandy Bridge Pentiums are very similar to Intel's Core i3.

Intel continues to separate the low end from the high end by limiting supported instructions. None of the Pentiums support AES-NI or VT-d. Other than higher clock speeds the 800 series only adds official DDR3-1333 support. The 600 series only officially supports up to DDR3-1066.

All standard Pentiums carry a 65W TDP. The Pentium G620T runs at a meager 2.2GHz and manages a 35W TDP. Regardless of thermal rating, the boxed SNB Pentiums come with an ultra low profile cooler: 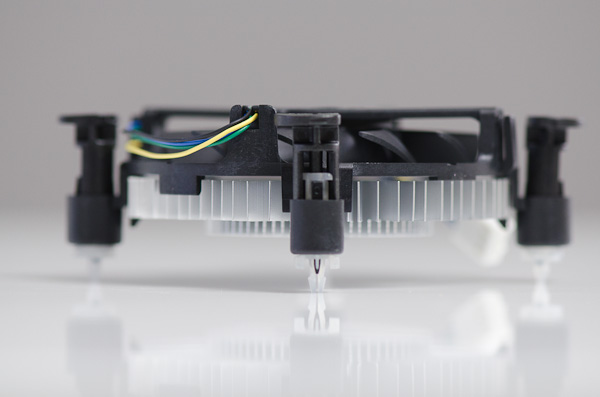 These Pentium CPUs work in the same 6-series LGA-1155 motherboards as their Core i3/5/7 counterparts. The same rules apply here as well. If you want video out from the on-die GPU you need either an H-series or a Z-series chipset.

When Intel moved its integrated graphics on-package with Clarkdale it dropped the GMA moniker and started calling it HD Graphics. When it introduced the Sandy Bridge Core i3/5/7, Intel added the 2000 and 3000 suffixes to the HD Graphics brand. With the Sandy Bridge Pentium, Intel has gone back to calling its on-die GPU "HD Graphics".

Despite the name, the Pentium's HD Graphics has nothing in common with Clarkdale's GPU. The GPU is still on-die and it features the same architecture as Intel's HD Graphics 2000 (6 EUs). Performance should be pretty similar as it even shares the same clock speeds as the HD 2000 (850MHz base, 1.1GHz turbo for most models). I ran a quick test to confirm that what Intel is selling as HD Graphics is really no different than the HD Graphics 2000 in 3D performance: 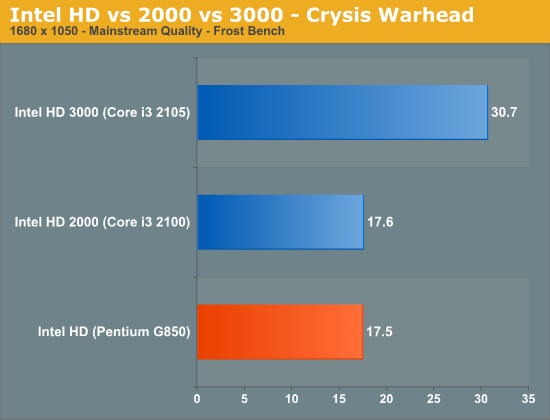 All is well in the world.

Missing Quick Sync is a major blow, although as I mentioned earlier I'm very disappointed in the poor support for the feature outside of the initial launch applications. The rest of the features vary in importance. To someone building a basic HTPC, a Sandy Bridge Pentium will do just fine. Personally I never play anything in 3D, never use the Clear Video HD features and never use Intel Insider so I wouldn't notice the difference between a Sandy Bridge Pentium and a Core i5 for video playback.