The M11x is a very impressive piece of engineering in so many respects, and it's easy to like much of what Alienware has done. That they stuffed this much gaming performance into such a small chassis is sure to delight mobile gamers. The problem is that Alienware also overlooked some very obvious features that should have been part of the M11x. Let's recap.

We like switchable graphics, as it lets us have our (gaming) cake and eat our (battery life) cake at the same time: tasty! However, NVIDIA's Optimus Technology launched in early February and suddenly made switchable graphics taste like last week's stale leftovers. Switchable graphics is still a step up from discrete-only solutions, but when NVIDIA beats their driver drums and says how much easier it will be to update NVIDIA graphics drivers on Optimus laptops, we can only conclude that switchable solutions are not likely to get updated drivers more than once in a blue moon. Don't believe us? Just go out and try to find an updated NVIDIA driver for the ASUS ULxxVt series. Granted, the situation isn't bad yet; despite warnings from a couple of games in our test suite, we didn't encounter any problems. What will happen in a year or two, though? We can't help but be concerned. 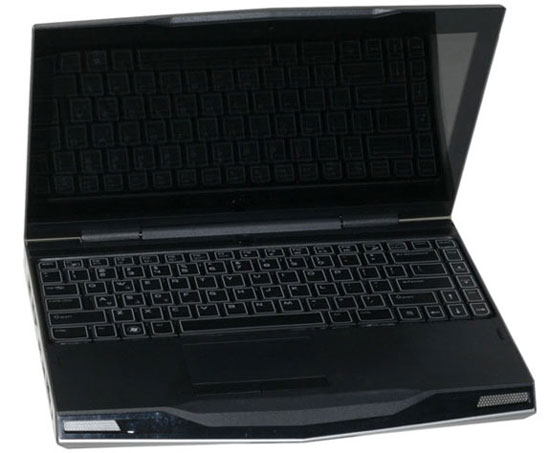 The LCD panel is another clear oversight by the bean counters. I can excuse a cheap, low contrast panel on a sub-$900 laptop that provides competitive gaming performance (i.e. the ASUS N61Jv), even if I don't like it. Sure, the M11x starts at $800, but as soon as you add 4GB RAM and a decent HDD you're looking at $1000+. A better LCD panel probably would have bumped the price up another $50, but the price increase would have been well worth the cost. We're also ho-hum on the keyboard feel; it's not bad but it's not great either.

Finally, there's the question of timing. CULV with overclocking showed itself to provide decent performance (even if the overclock is to 1.6GHz instead of the advertised 1.73GHz), but Arrandale CULV should be hitting the streets shortly. That would give users a dynamically "overclocked" CPU courtesy of Intel's Turbo Boost technology. Instead of a static 1.3GHz or 1.6GHz, the i7-640UM could run at 1.2GHz to 2.27GHz without ever rebooting or entering the BIOS—plus it would have the other performance enhancements of the latest Core architecture. We don't know if CULV Arrandale chips will actually be as frugal as current CULV offerings, but we're anxious to find out!

Perhaps with better power saving features and Turbo Boost, an updated M11x with an i7-640UM, i7-620UM, or even an i5-520UM would manage to stop the fluctuating noise levels. At present, the M11x oscillates between "silent" (<30 dB) and "I'm here" (36 dB) modes, even when sitting idle. It's irritating at best to have the fan kick on for a minute and then shut off for a minute; we would much rather have an in between mode where the system stayed at 33 dB whenever idle (or close to it). At least temperatures remain good, with the entire surface (top and bottom) staying under 37C (100F) even during stress testing.

Balanced against all of our complaints we have the fact that no one else offers anywhere near this level of performance without moving into the 15" or larger notebooks. Core 2 Duo may be yesterday's (well, 2006's) news, but it can still keep up with a midrange mobile GPU in most games. As we discussed in the Gateway P-6831 FX review a couple years ago, a "balanced" gaming notebook does a lot better with a moderate CPU and a fast GPU than it does with a fast CPU and a moderate GPU. The only competing laptops in terms of performance are going to need something like the GT330M, GT240M, GeForce 9700M GTS, or a faster GPU. Finding laptops with those GPUs for a reasonable price is fairly easy—the ASUS N61Jv is one example, and the Sony VAIO VPCCW22FX/R is another—but the VAIO is the smallest reasonable competitor we can find and it still has a 14" chassis and significantly less battery life.

That's the second winning element of the M11x: great battery life when you don't need the discrete GPU. Forget about Atom (unless you just need a slow $300 netbook); CULV designs offer great battery life and reasonable performance. With the GT335M, the only tasks that really don't work on the M11x are CPU intensive highly-threaded tasks like 3D rendering and video encoding. The final feather in the cap of the M11x is the overall design. Not everyone likes a flashy laptop, but gamers and technophiles are sure to appreciate the sturdy chassis and zoned lighting. The touchpad also works very well, and while it doesn't support all the latest multi-touch features, it does have ChiralMotion scrolling (swirl your finger to scroll) and pinch zoom. With the large touchpad surface and comfortable palm rest, the construction is definitely a net positive in our book.

Let's summarize by putting it this way. The M11x design and construction on their own are worthy of a Gold Editors' Choice award… or at least they would have been five or six months ago. The bar is a bit higher now, and the lack of Optimus Technology immediately causes us to demote the M11x to the silver level. Unfortunately, the LCD is also disappointing, which drops the M11x down to a bronze. The cost is somewhat high, fluctuating fan noise levels are annoying, and CULV Arrandale laptops should start showing up any time now. That makes us waffle on the bronze award, and going back to Optimus we have serious concerns about long-term driver support. Ultimately, we feel the M11x has tons of potential but can't quite capitalize on the current market. It deserves an honorable mention, and those of you who like smaller form factors can promote it back into the Editors' Choice range. For the rest, it's this close (holding fingers just slightly apart) to greatness.

We gave the ASUS UL80Vt a Silver Award late last year, and frankly the M11x is superior in every way (except price and LCD quality). However, we've received a few emails since our review asking about driver updates; to date the most recent UL80Vt drivers are ~6 months old. Alienware isn't ASUS, but our—admittedly cloudy—crystal ball tells us to expect more of the same. The UL80Vt only has an entry-level GPU, so driver updates aren't as critical; the M11x on the other hand is clearly a "gaming laptop", so it deserves—no, it needs—better support. Now that NVIDIA has Optimus Technology, they're more than happy to point out the flaws with their old switchable graphics (probably in part because AMD is still using a similar solution). Switchable graphics costs more money for the manufacturer, is more difficult to validate, drivers are harder to coordinate, and you have to deal with blocking applications and manually switching. We think AnandTech readers are perfectly capable of dealing with the manual switching—and at times I actually prefer being able to control which GPU I'm using (and I'm sure Linux users prefer the switchable design as well)—but if you choose to jump on the M11x bandwagon, my advice is to be prepared for a lack of driver updates. If you're in no hurry, here's hoping Alienware can release an updated M11x that adds the missing ingredients sooner rather than later.