January 3, 2010 saw the lift of Intel's embargo on the Clarkdale family of processors and supporting H55/H57 series chipsets. Boards featuring these chipsets have been in our labs for a few weeks now, and we have been busy testing them to figure out which one makes the most sense to buy. After a solid two weeks on the merry-go-round, leaving us with eye-bags larger than potato sacks and eyeballs redder than a Baboon's backside, we are finally in a position to deliver part one of our coverage.

Before we continue further, it makes sense to start with a couple of H55 and H57 chipset diagrams for a refresher and overview: 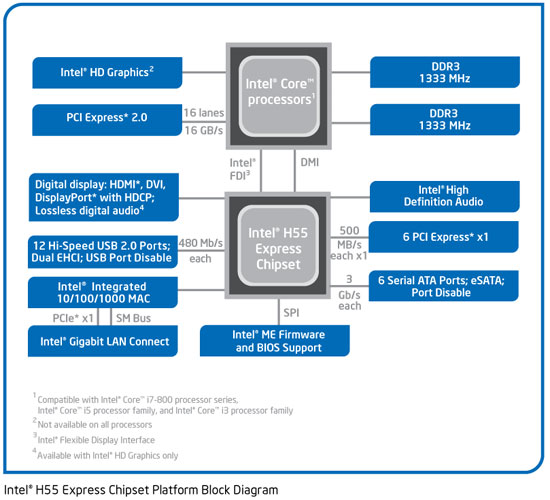 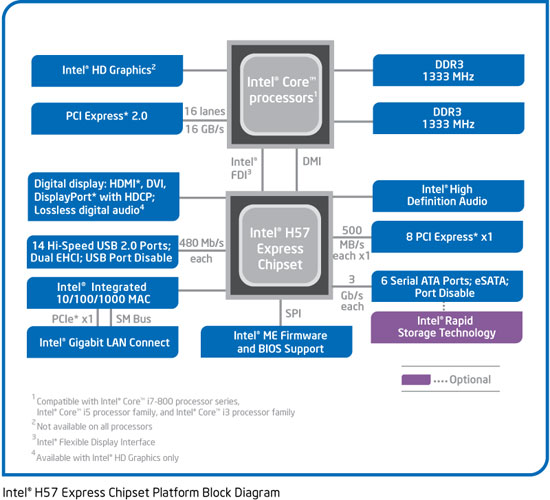 The diagrams lay out the topology simply enough; what they don't make clear is that Clarkdale CPUs are confined to single GPU configurations by Intel when used in conjunction with H55/H57 motherboards. That does not mean to say that you can't run dual GPU configurations on H55/H57 altogether though; you can if you use a Lynnfield series processor, if the motherboard vendor has taken the trouble of placing the appropriate lane switches onto the board.

The only way to get dual GPU capabilities from Clarkdale CPUs is to use them in a supporting P55 motherboard. Weird, no? The segregation would make sense if Intel offered the H55 and H57 chipsets to vendors at a substantially reduced price in comparison to P55. Clearly, that's not happening at present, as the H57 costs $3 more than the P55 before you've even put a component on the motherboard.

So where does this leave H57? The only thing it has to offer Clarkdale is a few extra PCI-E lanes, two extra USB ports, and RAID. If you're going to use the IGP, you don't really need the extra PCI-E lanes, which essentially means that you're paying for the option to run RAID on the H57 PCH. We also fail to see the attraction of running a Lynnfield processor in an H57 board; the H57 boards would need to come in at least $20 cheaper than entry level P55 boards, or offer some form of performance enhancement for it to start making sense.

In light of this, we're expecting vendors to bring H55 boards at a maximum of $130 (hopefully less), while H57 boards should be offered at a price reflecting the difference in chipset and associated parts costs only. The $150~$200 bracket is best left to mid/upper tier P55 motherboards and entry level X58 offerings, rather than have H57 competing in these segments.

Our focus for this two part series is to look primarily at the sub-$150 H55/H57 motherboards. A $200 board did make it into the test lineup before the dual GPU information was made clear to us by Intel and the board vendors. We've kept it in the running for now, just to see what H57 offers over H55 in terms of performance and overclocking.

Today's full lineup of test subjects is the ASUS P7H55D-M EVO, ASUS P7H57D-V EVO, the ASRock H55M-Pro, and the MSI H55M-ED55. Don't be alarmed if you don't see your favorite vendor in the current test list; two boards from Gigabyte have just touched base in our labs, while boards from BIOSTAR and ECS are currently en route. We'll be looking at all of those in part two of our coverage, where we'll also offer up our final verdict on the best choice.

We've got plenty of fat to chew over in part one first, so let's move on to our user experience summary of each board before we focus on the finer elements of today's test samples.