It's been an "interesting" few weeks testing these four boards. New platform launches are riddled with potholes when it comes to functionality and this one did not disappoint. The Achilles' heel this time was 8GB memory configurations either failing to POST in some of our sample boards, or having stability issues at stock operating frequencies (let alone when overclocked).

Buy any of these boards right now and you'll see anywhere from three to six BIOS releases on vendor sites tackling these early adopter issues. Our testing of the recent BIOS releases shows a vast improvement over what we were experiencing last week. Needless to say, you're best advised to boot up the boards with a single memory module and flash to the latest BIOS as soon as it touches down while keeping track of future updates.

In all, these boards probably need another month or so to mature given the myriad of peripheral combinations in the wild that remain untested. It's not out of place for us to recommend that you wait a while if possible before buying into this platform if you're looking for a completely trouble free ride. 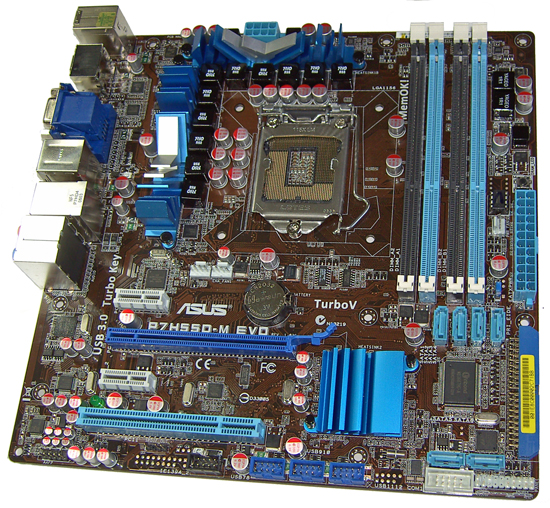 Getting down to business, based upon our testing to date, the most "polished" board when it comes to functionality right now is the ASUS P7H55D-M EVO. The board delivers consistently with a variety of configurations, overclocks well, and comes in at a price point at the upper edge of where we'd like to see H55 boards marketed (MSRP $134).

From the time this board landed with us a couple of weeks ago to now, it has shown a bit more consistency than any other, needing little more than some extra DRAM options and some looser default sub-timings to work better with 8GB of memory to round off the overall package. Those fixes were delivered rapidly, leaving us with very little to groan about other than a workaround for a limitation with bundled software (Express Gate) and its IDE SATA mode requirements.

In other areas of performance, pockets of opposition from ASRock were apparent at times in certain scenarios, although when we look at the total package the ASUS offering has a bit more shine. There's less to nit-pick at, other than the additional price for features you may not need to use in the long term - like some of the bundled software or finer overclocking functions.

The ASRock H55M-Pro has the upper hand for 4GB overclocking, while the ASUS P7H55 EVO fares slightly better with 8GB of memory in overclocked scenarios. BIOS enhancements could change much of this though, so we're interested to see if ASRock will rise to the challenge in the coming weeks.

We'll reserve further accolades for the ASUS P7H55 EVO until we've had a good look at boards from other vendors in part two of our coverage; however, out of the four boards we're looking at today, it's our pick. The other three contenders have grey areas either in terms of pricing or overall functionality being below par. We'll provide you with a quick summary of key areas needing improvement right here.

Functionality is the same as the P7H55D-M EVO, offering a smidgen more stability in 8GB memory configurations and also offering SATA 6G capabilities courtesy of Marvell. The H57 also brings RAID functionality to the table, but all of this comes at a price of $200, over $60 more than the smaller H55M EVO from ASUS and double the price of the ASRock H55M-Pro, which out-clocks it in certain scenarios.

At $200, you're into the realms of high-end P55 boards touting similar features sans the ability of using Clarkdale's IGP. Remember, dual GPU configurations are locked out on Clarkdale CPUs unless you use the P55 Chipset, leaving you with an ATX board that can only be used to "full potential" with a Lynnfield CPU. Plug a Lynnfield in and you've got no need for the onboard HDMI/DVI-D outputs, making it difficult to see what this board is really supposed to do that P55 does not. (Ed: Perhaps some form of switchable graphics down the road to save power? I know, it's not a huge priority, but just a thought.)

Coincidentally, our testing to date has shown improved Clarkdale memory overclocking on the P55 boards; the difference is not huge but certainly helps wring out every last MHz from Clarkdale. We're not sure on the root cause of this but as long as this issue exists, H57 has little to offer over H55 and P55.

Given the choice, we'd be inclined to opt for a cheaper H55 board and discrete GPU, rather than fork out just for SATA 6G and RAID capabilities, both things we can comfortably live without at this point. We've also been sitting here wondering why we're not seeing vendors including the superlative Intel NIC on boards in this price range; both BIOSTAR and DFI have managed it on boards costing less (although you don't get SATA 6G and USB 3.0 options on those models).

If you must have SATA 6G now, then it's also possible to do it on the latest P55 boards from ASUS, Gigabyte, and MSI provided you're happy with a discrete GPU. We'd also take more than a fleeting look at quad-core processors on other AMD/Intel platforms that offer various avenues of performance enhancement over Clarkdale - if your budget will stretch to accommodate.

We found the board accepted and ran all of our peripheral devices well enough to give the ASUS H55M a run for its money. Coming in around $95, it's a lot cheaper than the ASUS P7H55M EVO, but also a little raw. Initial public BIOS releases were plagued with lock-ups on the DRAM timing page after changing settings, something we had to request fixes for twice during the test period. We're happy to say that the latest public BIOS release fixes this problem, so make sure you flash to the latest the BIOS is if you're going to undertake any overclocking.

Get that out of the way and 4GB memory overclocking becomes one of this board's strengths. The H55M-Pro turned in the highest stable DRAM frequency of the test lineup, upstaging the ASUS P7H57D-V EVO on occasion. Another couple of advantages on the hardware front from ASRock compared to the ASUS P7H55D-M EVO offering is that ASRock gives you the additional x16 length (x4 electrical) PCI-E slot, allowing the use of RAID cards and such at a later date. You also get socket 775 mounting options on ASRock's board, allowing users to carry over coolers from previous builds and saving some money in the process.

Any foibles of the ASRock H55M-Pro BIOS start to surface in the department of 8GB memory overclocking and higher stable BCLK frequencies, because you've got limited DRAM timing options and voltage granularity at your disposal. The addition of QPI multiplier options in the BIOS should extend overclocking potential somewhat, although ASRock does not view the H55M-Pro as a "power user" board, so we wonder if these features will ever be opened up for user intervention.

The bundled overclocking OS software also needs some work, we found changing rail voltages like VTT resulted in the board locking up and requiring a full AC off/on power cycle to POST. These are all simple things that ASRock can and should fix to enhance the user experience.

Had the issues/quirks not have been present during the test period, we'd be in a position to bestow an award on this board for delivering everything that we feel H55 and Clarkdale is about at an excellent price. If ASRock decide to tackle some of these areas between now and part two of our coverage we might still be in a position to do so - depending upon the competition of course.

With all that said, if you're not looking at heavy overclocking with 8GB of memory, the ASRock H55M Pro is very hard to ignore at under $100.

The MSI H55M-ED55 is priced at $130 and poised to compete directly with offerings from ASUS and Gigabyte in this segment. However, ASUS and Gigabyte are churning out boards equipped with USB 3.0 features at this price point, leaving MSI to make up ground in other areas to compete. And that's where things become a little hazy. Memory functionality and overclocking with 8GB on the MSI H55M is flaky at times; the initial BIOS would boot fine with our Corsair 8GB memory kit and even passed our benchmark tests, but it was not stable for any form of heavy stress testing, even at stock frequencies.

We have been passed a patched BIOS to fix this issue and have noted some improvement. Do bear in mind that, in order to get the board to POST after inserting a different set of DIMMs into the slots, you'll have to leave it powered off for 5 minutes before it will POST, even if you clear CMOS. It seems the board retains previous settings somehow, that prevent it from posting unless you give it a timeout period. Once you get the board to POST though, it is at least stable now, and can also be moderately overclocked.

Moving on to the other DRAM issue, MSI offers a full spread of BIOS functions for overclocking, although the advanced DRAM timing section is a minefield to use - it's all or nothing. There are no individual AUTO timing options for any of the sub-timings in the DRAM menu; you're stuck with full AUTO presets, or complete manual control with no automatic tracking as memory frequencies are changed.

This leaves the user with the task of spending hours trying to find combinations of settings that work because the board will not POST if you get any of them wrong. Other vendors have manual or AUTO options for individual timing functions, so you can pick one to adjust without upsetting the balance of everything else. We've asked MSI on more than one occasion to follow suit but have yet to see a change in how they choose to implement memory sub-timing options on all of their motherboards. This is unfortunate considering the advancements they've made on the hardware front over the past 12 months.

Assuming you manage to negotiate all of the memory sub-timings properly, you're still left with a board that can't quite keep up with the ASUS P7H55 EVO when pushed hard, especially with 8GB of memory. We managed to get the MSI board stable at 1510MHz with our 8GB Corsair kit, while the ASUS H55/H57 models managed over 1550MHz with tighter timings on the same modules.

Lastly, the bundled overclocking software has a habit of misreading and misapplying CPU PLL voltage; you end up with voltages over 2.1V going into a sensitive 1.8V rail. One of the quickest ways to kill or degrade a CPU is to overvolt CPU PLL unnecessarily; we hope MSI fix this bug soon.

With these issues, we're not in a position to recommend the MSI H55M-ED55 right now. The ASUS and ASRock boards are both easier to use and more functional in the areas that matter.

Now that the initial summary is out of the way, let's move on to a closer look at board features.